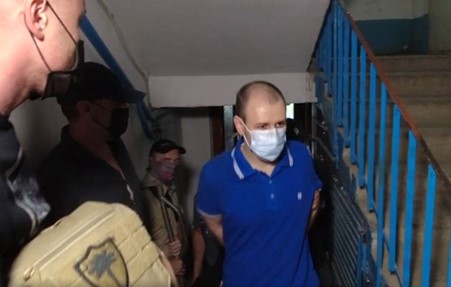 Russian FSB officers in occupied Crimea are probably hoping for bonuses after claiming to have ‘caught two spies’ (at least) over recent months, with a video of the most recent arrest lingering ponderously over video shots of the man’s Ukrainian flag, etc.  Since Russia has made it next to impossible to live in occupied Crimea without its citizenship, the fact that both men are described as Russians probably means only that both obtained Russian passports after Russia’s invasion and annexation in 2014.  As in all such cases, the men are accused of providing information to Ukraine – either the Ukrainian Security Service [SBU] or Military Intelligence.

A radio fanatic with a Ukrainian flag (Stanislav Stetsenko)

On 24 June, TASS reported that a young man from Simferopol had been arrested on suspicion of having gathered information about Russian military flights for Ukraine’s Security Service.  The FSB claimed that he had, over a long period of time, received and passed on information, using special antenna and reception equipment.  They said that he had been remanded in custody for two months.

The ‘investigators’ claim that the man, who is not named, had gathered and passed on information about the activities of the Russian Military Aerospace Forces and Marines over the territory of Crimea and the Black Sea.  This is alleged to have contained current data of a military nature which could be used by a foreign state against the Russian Federation’s security and commissioned by Ukrainian Military Intelligence.  “An informed source” told Interfax that the person “is a technical specialist who understands specialized equipment.  But not a military person, with a civic profile”. TASS’s equally unnamed source in the occupation enforcement bodies said that the man, arrested on 22 June, had worked in the public sector, but not in a field linked with aviation.

The independent website Grani.ru has reported unconfirmed information that the man in question is Stanislav Stetsenko, born in 1988, although the occupation ‘court’ in Simferopol identified him only as ‘S’.

During the years of Russian occupation, the FSB produces videos, either of the men’s supposed ‘confessions’, given while the men are held incommunicado or of the alleged searches, when, as in this case, the person’s pro-Ukrainian views are visible.  The camera here lingers on the Ukrainian flag, a yellow and blue scarf with ‘Ukraine’ written on it in Ukrainian, binocular and an aeronautical map of Crimea published before Russia’s invasion.  None of this, of course, is in any way suspicious, but nor is the equipment also shown.  All of it, Grani.ru notes, citing Radioscanner.ru a forum for radio fans, can be legally procured in Russia or Crimea.  If the person arrested is Stetsenko, then he has been registered on the Radioscanner.ru forum since 2010, and seems to be an avid airspotter.  This is very obviously the type of activity that would get somebody ‘noticed’ by the FSB, and hardly a good cover for a person recruited by the Ukrainian Security Service.

The secrecy around even the young man’s identity makes it extremely easy for the FSB to put pressure on him and obtain whatever ‘testimony’ they require without an independent lawyer getting in the way.

All of the above is reminiscent of one of Russia’s first ‘spying’ cases after its invasion and annexation of Crimea.  Almost seven years later, Valentin Vyhivsky remains in Russian captivity, despite very strong grounds for believing that he was tortured into ‘confessing’ and no other evidence to back the essentially secret charges.

Russian state media have reported that the Lefortovo District Court in Moscow, on  15 June, extended for a further three months the detention of Yevhen Vadimovych Petrushin.  He had been arrested on 21 April and remanded in custody in occupied Sevastopol, before being moved to the notorious Lefortovo Prison in Moscow. Petrushin, whose name was only revealed in June, is charged under Article 275 of Russia’s criminal code (‘state treason’) and is accused of having supplied Ukraine’s Military Intelligence with information about the Russian Black Sea Fleet.  He faces a sentence of between 12 and 20 years, with essentially no chance of learning whether there is any evidence to back the charges.