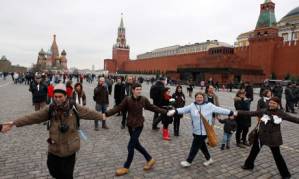 Russian police let hundreds of activists roam Moscow’s Red Square freely on Sunday in the first anti-government protest held next to the Kremlin, though it detained three activists for an attempt to set up a tent.

Russian authorities had so far made the Red Square off-limits for political demonstrations. Last week they sealed it off and detained dozens of activists who had sought to hold a silent protest against Vladimir Putin’s rule.

But police showed leniency on Sunday as hundreds of activists walked around the spacious square wearing white ribbons and carrying white flowers, the symbols of popular protests that erupted in Moscow and other Russian cities following a disputed parliamentary election in December.

"I feel like I’ve come to another planet, I do not understand what is happening. This is the Kremlin, " said activist Vitaly Zalomov at the protest, which was dubbed "White Square".

"Where are the police?"

Putin faced the largest protests in its 12-year rule in recent months, but after his victory in a March 4 presidential election the fragmented opposition movement has lost some of its momentum.

The Kremlin has agreed to limited political reforms in response to the demonstrations, but rejected the protesters’ main demand for a rerun of the December 4 parliamentary election, which government critics say was rigged.

The opposition said it would keep up the fight in local elections and street protests.

Activists argue that the authorities violate their freedom-of-assembly right when they demand to agree the location and the timing of a protest in advance.

The police broke up the first opposition rally in December saying it had not been authorized, and another protest in March when protesters did not leave a central Moscow square at an agreed time. Other demonstrations were peaceful.

Located next to the Kremlin, the official residence of Russian presidents, the Red Square is one of Moscow’s main tourist attractions, home to the ancient St. Basil’s cathedral and the mausoleum of Soviet state founder Vladimir Lenin.

"The Red Square is also gradually becoming a place where people come to demonstrate, " said activist Pavel Shelkov, who was detained by police and held for four hours after attempting to protest there on March 31.

Sunday’s action, organized through social networks, has not been agreed with the authorities, organizers said, but most protesters were careful not to provoke the police or form large groups.

Opposition leaders Boris Nemtsov and Sergei Udaltsov handed out leaflets calling on Putin to go and asked their supporters to hold a similar protest outside parliament, where Putin is due to make a speech on Wednesday.

Police closely watched the action but interfered only once when environmental activist Evgeniya Chirikova tried to set up a tent, a symbol of continuous street protests similar to those that toppled governments in the Middle East.

Police detained Chirikova along with two other activists. About one hundred of her supporters gathered outside the central police station where she was being held to demand her immediate release.