Journalists have called on President Yanukovych to intervene over systematic sabotage of viewings of a documentary film medley “Open Access”.  If the appeal seems trivial and misdirected, it is not.  One of the films is about journalist Serhiy Leshchenko’s efforts to uncover the circumstances behind the privatization and ownership machinations of Yanukovych’s controversial estate at Mezhyhirya.

Since the 2011 Public Information Act is deemed one of the current regime’s few success stories, both informal efforts to restrict access to information of clear public importance and legislative moves with direct impact on such access deserve scrutiny.

Under Yanukovych’s presidency, only a carefully selected group of journalists have been given a no less edited view of what was once an official State-owned residence.  All efforts to obtain information about public funding spent on the residence have been thwarted, and all planned peaceful protests anywhere near the gates of the vast estate banned by the courts. In May this year two Democratic Alliance activists were jailed for 5 and 7 days over entirely peaceful protest. 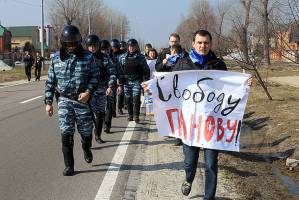 “Open Access” viewings in September were disrupted in 8 out of 20 cities.  In Kyiv on Sept. 27 around 30 inebriated down-and-outs occupied the first rows of the cinema, smoked, let off smoke bombs and generally disrupted the viewing.  They were wearing badges with the words TRAMP TV, making it clear that somebody had organized their stunt.  Shortly after they were finally removed, the police appeared and demanded that the cinema be cleared, supposedly because of a bomb alert.

The authorities in the Crimea were especially zealous with the viewings disrupted in both Simferopol and Sevastopol.  In Feodosia, the hotel which had agreed in advance to the film showing received a visitation from people who suggested that the film showing should not take place to avoid problems. The hotel backed off and cancelled the showing.

There were equally gross forms of sabotage in a number of other cities. None of it was formal, and there may not have been any directives from the President’s Administration.  Over the last three years, however, there have been numerous cases of heavy-handed actions by the police or unidentified individuals in response to films, posters or protests unflattering to the president.

Easy to understand, therefore, why journalists and civic activists addressed their appeal last week to Yanukovych

Those calls are unfortunately as likely to go unheeded as others over the last two years since the Public Information Act was passed.  The “Open Access” documentary films all pertain to ongoing problems with access to information.

The Public Information Act was widely praised back in 2011, yet late into 2013 a crucial bill No. 0947 has still not gone beyond its first reading in parliament.  The bill proposes amendments to around 50 pieces of legislation vitally needed for the said Act to actually work.  The paperwork, if you don’t scrutinize the dates too closely, can be waved about in public, while access, at least to really sensitive information, remains as hampered as ever.

It could become even more restricted if certain MPs have their way.  Three MPs from the ruling Party of the Regions have tabled a draft bill №3301  which, if passed, could seriously curtail access to information.  It would declare any information about an individual confidential and therefore able to be divulged only with the person’s consent.  It would also remove the requirement for bodies of local self-government to publish individual acts making it even easier for such local bodies to conceal corrupt dealings involving public funding, allocation of land etc.  There are a number of other provisions which would make it easier for officials to block access to information.

Even if this bill is deemed too scandalous to pass, the tendency to justify concealment of important information on the grounds that the material contains “confidential” information has already taken hold.  On Aug. 9 the District Administrative Court in Kyiv upheld the refusal by the Verkhovna Rada Office to provide copies of income declarations submitted by the Parliamentary Speaker and leaders of all party factions.  The argument was that they contain “confidential” information. Any such data can, of course, be blotted out leaving the information which the public are entitled to as per both the Public Information Act and anti-corruption legislation.  Or it can be used as a convenient shield hiding all kinds of secrets.

On the subject of shields, one other initiative, also from Party of the Regions MPs, should be mentioned.  Some of them have recently expressed fear of falling pieces of technology from the journalists’ balcony in parliament and proposed inserting a barrier.  The injuries are thankfully hypothetical, unlike the video footage taken by journalists from the balcony of Party of the Regions MPs voting illegally for truant colleagues. The proposed shield would prevent such irritating attention to MPs’ voting habits.

MPs are in a legislative flurry at present hastily adopting rough and unrefined draft bills required by the EU before the Association Agreement can be signed.  The argument is that they can be reworked later and amended via subordinate legislation.

Like the subordinate legislation needed for two years now to make the Public Information Act bite.  Legislative moves are manifestly not enough especially when they require political will, the lack of which is an entirely open secret of the greatest public importance.