Whose anti-Semitic and Homophobic Choice? 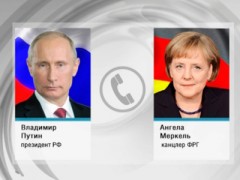 From the party’s site

How divided Ukraine is arouses endless debate, yet it is the West which at present is appearing positively schizophrenic.  Take German chancellor Angela Merkel’s interest in giving Viktor Medvedchuk official status at peace negotiations.  This is undoubtedly the Kremlin’s choice, however why the leader of a party with apparent anti-Semitic leanings and a pronouncedly homophobic position should be the EU’s is less clear.

Medvedchuk was one of the first people against whom the USA imposed sanctions back on March 17 “for threatening the peace, security, stability, sovereignty, or territorial integrity of Ukraine”.  He is also targeted for having “materially assisted, sponsored, or provided financial, material, or technological support to Yanukovych”. Ex-president Viktor Yanukovych who is in hiding in Russia, is generally believed to be playing a major role in the present unrest in Donbas.  Medvedchuk’s party or its members are considered by the US to be undermining democratic processes in Ukraine.

They are also giving freedom of speech a bad name with a site that posts appallingly anti-Semitic articles.  A particularly extreme example from 10.12.2013 was entitled “Jews, Jews, there are Jews everywhere” (A screen shot can be found here ). The author, Yevgeny Barannik unfortunately saw the need to express the view that all power in Ukraine is held by Jews, and “the whole opposition in Ukraine is also Jewish despite some exotic surnames”.  In true Soviet style, the author then ‘exposes’ the Jewish surnames of certain opposition figures or or their grandparents.

After an article entitled “Viktor Medvedchuk’s anti-Semitic Choice”  condemned the text, it disappeared.  This is despite the attempt by Yelena Markosyan, regular author and apologist for Medvedchuk to claim that the party was simply defending freedom of speech and that anybody can put what they like on the site.

Some people certainly do, and this is by no means the only anti-Semitic material which can still be found on the site (see, for example, the text here).

The claim, however, that the site is an ideological free-for-all is far from the truth.  This is evident simply from the ‘news’ presented.  The site reports the opening of a photo exhibition ‘Odessa Tragedy’ in Hungary and India aimed at fighting the ‘muffling’ of information about the ‘fascist attack on anti-Maidan demonstrators and how they killed people’.  This version of the tragic events of May 2 is also at variance with the report presented by the UN High Commissioner for Human Rights, but gels completely with the line taken by the Kremlin and most Russian media.  The site reports a statement by European Parliament deputies proposing to postponing the signing of the EU-Ukraine Association Agreement; claims that the Red Cross has recognized the Kremlin-backed militants’ self-proclaimed Donetsk People’s Republic to be a party to the military conflict; and that the US State Department supports the party ‘Ukrainian Choice’’s idea of federalization.

All of this and more is similar to what one finds on Kremlin-loyal Russian media.  The homophobic views, seen in the billboard here in which the party ‘warns’ that “EU Association = single-sex marriages” are also actively pushed by Russian politicians and seen in the scandalous law in Russia against what is called ‘promoting homosexuality’.  Medvedchuk’s party’s strong anti-EU position and support for Ukraine’s so-called ‘federalization’ are also found not only in mainline Russian media but in the public statements made by the Kremlin’s far-right friends.  Marine le Pen, for example, leader of the anti-immigrant, anti-Semitic and homophobic French National Front, expressed her belief that Federalization of Ukraine is wisest and most balanced solution during a meeting this April with Russian parliamentary speaker Sergei Naryshkin.

Russian President Vladimir Putin has found nothing jarring about the anti-Semitic views of his close friend Medvedchuk’s party, nor those of the far-right militants the Kremlin is backing and providing fighters, surface to air missiles and other sophisticated military technology and arms to in eastern Ukraine.

Western leaders can simply feel discomforted by such views, but should be extremely wary of an overt conflict of interests.  Medvedchuk’s agenda is directly that of the Kremlin’s and should not be that of the EU or any member country.