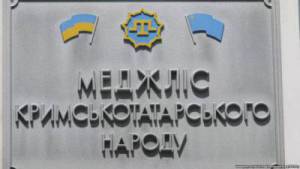 Nobody expected real court hearings on Russia’s execution of the Crimean Tatar Mejlis [representative assembly], but the effective abandonment of any pretence still came as a shock.  Two days before the next scheduled hearing on the ban, Natalya Poklonskaya, installed as prosecutor after Russia’s invasion, announced that she was ‘suspending’ the activities of the Mejlis.

She claims that the decision was taken “to prevent violation of federal legislation” and cites articles 9 and 10 of Russia’s law on countering ‘extremism’.  Both these articles are about alleged extremist activities of ‘civic and religious organizations’.  The Mejlis is the representative assembly or self-governing body of the largest indigenous people of Crimea.  The plans to criminalize it, by claiming it to be ‘extremist’, have been internationally condemned, with all Ukrainian and international observers clear that the planned criminalization is because of the Mejlis’s opposition to Russia’s occupation.  Oliver Loode from the UN Forum on Indigenous Issues has put the situation in stark perspective: by this offensive against the Crimean Tatar people’s representative body, Russia is attacking the Crimean Tatars themselves.

Now, without a court ruling in place, Poklonskaya has suspended all rights of the Mejlis which “is prohibited from using all state and municipal media.  It cannot hold various public mass events, use bank accounts or carry out any work. All its propaganda will be banned”.

This ‘suspension’ is to continue until the court issues its ruling.  What that will be was, tragically, never in doubt, but now Russia and its puppets have dropped all pretence.

Aider Muzhdabayev suggests that Poklonskaya announced this now since a number of members of the Mejlis are outside Crimea.  “That is a signal to them that it would be better not to return. And to all Crimean Tatars that the gates of the ghetto are slamming shut.  Now don’t dare to live a finger and don’t expect any mercy.”

The court hearings, it should be stressed, have also demonstrated the legal ghetto which Russia has dragged Crimea into.

It transpired at hearings last week that the prosecutor doesn’t know what exactly is to be criminalized, which makes a massive difference to the number of people who would overnight become officially ‘extremist’.  That, however, was of no concern to the judge, while the prosecutor also saw no reason for court examination.  If criminal charges have been laid, the person is guilty, Poklonskaya’s colleague effectively stated.

The issue of what  – and whom - Russia wants to criminalize is by no means academic.  The application states that the Mejlis of the Crimean Tatar people has over 370 structural departments.  Nariman Dzhelyal, First Deputy Head of the Mejlis, says that they cannot understand whether the application is aimed at the Mejlis, as executive body of the Qurultay [Crimean Tatar Congress] and its 33 members.  Or is it supposed to cover all regional mejlis?  In that case thousands could become ‘extremist’.

This was clearly articulated at the hearing last week and ignored, both by the prosecutor and by the judges who turned down the application to call in representatives of regional mejlis.

The primitive level of argumentation has sometimes been almost comical.  On April 7, for example, a representative of the State Committee for Nationalities decided to demonstrate that he’d done his homework.

He asked Dzhelyal why the latter “considers the Crimean Tatars to be an indigenous people”.  Dzhelyal was clearly taken aback by the question, but answeredquite rightly that self-identification is sufficient and that there is no established definition*.  This was clearly the moment the national minorities official was waiting for and he read out some document that he had found on the UN page, which states that indigenous peoples have retained their link with a “society that existed up to invasion, seizures and the introduction of a colonial system”.  “if we view them as indigenous population, - the official announced triumphantly – that means that we have to agree that there was some kind of invasion, seizure of territory. And we understand that there wasn’t that, and never was!”.

There was mirth from the courtroom which prompted angry threats from the judge to remove the audience.

At the hearing on April 7, Dzhelyal pointed to the claim in the prosecutor’s ban application that the Mejlis had received several warnings “about the inadmissibility of carrying out extremist activities”.

Dzhelyal has previously noted the absurdity of this being used as ‘evidence’ of extremism.  If you are warned that stealing is illegal, this does not make you a thief.

It is also important to understand what generated these reminders that ‘extremism’ is inadmissible.  On April 25, 2014, Riza Shekiev, a member of the Mejlis, reported receiving precisely such a warning over the Ukrainian flag raised over the Mejlis headquarters (which have since been seized).

In court, Dzhelyal noted the obvious inaccuracy of the claim.  He was aware of only one such warning, and that had been directed at the Head of the Mejlis, Refat Chubarov.   Details of this warning can be found here, together with a link to a recording since, as on other occasions, the occupation authorities avoided provided documentation which could be appealed against.

Dzhelyal asked the prosecutor whether the warning had been issued to Refat Chubarov, a public figure (who was shortly afterwards banned from his homeland), or to the Mejlis.

The prosecutor claimed that the warning was to the Mejlis as represented by Chubarov and went on to note that criminal proceedings had been brought against Chubarov ‘for calls to violate Russia’s territorial integrity”  (otherwise known as opposing Russia’s illegal invasion and annexation of Ukrainian Crimea).

There was a brief silence, and then Temishev asked: “You mean a court ruling having come into force is no longer mandatory?”

The prosecutor:  “The grounds for initiating a criminal investigation are the existence of sufficient grounds to assume that the specific person committed the crime.”

Herein ends the Russian justice system and its puppet form in occupied Crimea.

*    In a recent resolution, the European Parliament recognizes Crimean Tatars as an indigenous people of Crimea whose right to self-government is protected under the UN Declaration on Rights of Indigenous Peoples. It calls for “respect for the Mejlis as the legitimate representation of the Crimean Tatar community, and for avoidance of any harassment and systematic persecution of its members.”