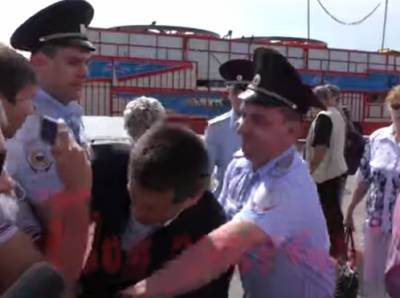 Among the 50 or more Crimeans violently dispersed while trying to hold a peaceful protest on June 4 was one communist deputy who played an extremely active role in supporting Russia’s invasion and annexation of Crimea.  Judging by the outraged cries from the protesters, Pavel Stepanchenko was not the only protester confused by the face presented of Russian reality.

The protest was over the appearance of commercial outlets and funfair attractions blocking the beach in Alushta.  Local residents are convinced that corruption among the authorities is behind the loss of access to their beach.

The Internet site Your Newspaper informs that an attempt by the initiative group to agree the protest on the beachfront with the city authorities had been rejected.  Having failed to get permission, they avoided any loudspeakers or other items that could get them accused of holding an unauthorized protest, and tried to call their peaceful action a ‘meeting with city council deputy Stepanchenko’.  Such meetings cannot be banned.  At least not in Ukraine they can’t.

Article 39 of Ukraine’s Constitution states quite unambiguously that “citizens have the right to assemble peacefully without arms and to hold meetings, rallies, processions and demonstrations, upon notifying in advance the bodies of executive power or bodies of local self-government.”

Notification does not mean asking for permission.  If the authorities want to ban a meeting, they must apply to the court.   Court bans became extremely common during the presidency of Viktor Yanukovych, though not those meetings formally referred to as between MPs and their voters.

Crimea, however, has been under Russian occupation now for over 2 years, with Stepanchenko reportedly having even received an award for his part in ensuring Russia’s seizure of control.

Despite this, he was clearly taken aback when police arrived within seconds and demanded to see their “permit”.   He can be heard on the video here actually telling the police that there is a notification system, and that they had ‘notified’ the authorities.

Russia’s Constitution undoubtedly speaks of freedom of peaceful assembly, but permission has long been required, and normally refused, for any public protest, march, etc.   While Crimea remains under Russian occupation, such restrictive measures will apply there also.

The police soon physically grabbed Stepanchenko and tried to drag him to a police car.  The other protesters tried to prevent this, and the police called in reinforcements.  The officers eventually pushed Stepanchenko into the car which was then surrounded by enraged protesters, including several women with children.

In seriously confused fashion, the protesters chanted both “Shame on Russia” and “Banderovtsi!”.   The latter refers to supporters of the Ukrainian nationalist Stepan Bandera and has long been used in all Russian and pro-Russian anti-Ukrainian rhetoric.

The same newspaper reported later that Stepanchenko had been released after 7 hours, with his clothes ripped and with signs of bleeding on his back.  Two other protesters were at that time still being held in custody.  Stepanchenko told the paper about his “illegal detention” saying that the police had hurled him to the floor in their minivan and proceeded to kick him.  He was then taken to the police station and says that for the first three hours he was not permitted to call his lawyer.

Stepanchenko was also angered that he had been illegally held for over 3 hours and rang the police number to inform of this.  One of the heads of that department came running within 10 minutes, but not with the result Stepanchenko expected.  Instead, the police head shouted at the officers because they had let Stepanchenko hold on to his mobile phone!

He and the other two men detained face administrative charges – for ‘organizing a illegal public event’ and ‘not obeying the demands of a police officer’. 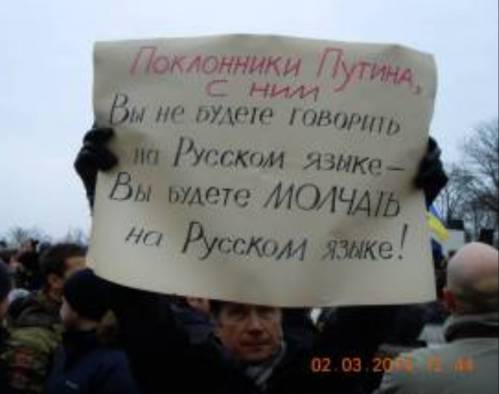 Before the pseudo-referendum on March 16, 2014, protests against Russia’s annexation were still possible, though could get participants beaten up by the so-called ‘self-defence’ armed paramilitaries helping Russian soldiers.

On one of those demonstrations, a Ukrainian held a banner reading: “Supporters of Putin!  With him you won’t SPEAK in Russian, you will be SILENT in Russian!

It was a warning that many did not then heed.