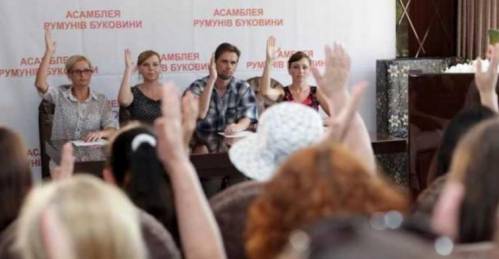 A fictitious ‘Assembly of Romanians of Bukovyna’ is for the second year running reported to be demanding greater autonomy for ethnic Romanians and complaining that the rights of minorities are violated in Ukraine.  The latest reports come just two weeks after Russian TV claimed that four other Ukrainian oblasts were demanding autonomy.

There is no evidence that the so-called Assembly actually exists, but having succeeded in duping one western journalist a year ago, those behind the fake presumably saw no harm in going for a remake.

Very little effort was, unfortunately, required with a number of Ukrainian media simply reporting the demands as though genuine. Most cited Ukrainian News as their source, yet had obviously failed to check the link.  Since this leads nowhere, there was even confusion as to whether the alleged coordinator of this assembly is a man or a woman!

The Bukovyna website Bukinfo did however immediately call the organization a fake which it believes Russia’s FSB is behind, and pointed out that nobody in the region has heard of the so-called assembly.

One of the Russian sources that reported these “demands for autonomy” was Tsargrad TV, owned by Konstantin Malofeyev, who is under western sanctions for his role in the invasion and annexation of Crimea and military aggression in eastern Ukraine.  Tsargrad TV opted for Dorin Chirtoaca being a man, and reported that the autonomy mentioned in the title “is needed to defend their rights as an ethnic minority which is suffering persecution”.

A letter has supposedly been sent to President Petro Poroshenko in which they call on him to give the area with a high percentage of Romanians in the Chernivtsi oblast territorial autonomy status.  This was allegedly reported to Ukrainian News by Chirtoaca who claims that the rights of Romanians and other ethnic minorities are gravely violated in Ukraine.  The document is variously referred to as a letter or a statement, and is nowhere provided in full, however it is stated that the ‘Assembly’ has decided to send it to the EU, the Parliamentary Assembly of the Council of Europe and other international bodies.  Chirtoaca claims that “activists of the Romanian national movement are persecuted, and not allowed to hold events and forums”.

There were no pictures, no direct link that opened to the alleged source and conflicting views as to whether the coordinator was a man or woman.  Most disturbingly, none of the Ukrainian media who reported the ‘Assembly’s demands’ had thought to check the information out with representatives of Romanian organizations in Bukovyna.  This despite the fact that they were being presented with an ever shoddier remake of a fake from July 2015.

The first report of a founding conference of the so-called ‘Assembly of Romanians of Bukovyna’ was posted on July 27 by nr24.org, and from there by Korespondent.net, one of the media still owned by millionaire Serhiy Kurchenko, a man with strong links to ex-president Viktor Yanukovych and like him, hiding out in Russia.  On that occasion, there had probably been an original report on nr24.org which was swiftly removed.  It had been mindlessly reposted by many websites, before Bukovyna journalists and representatives of the ethnic Romanian community sounded the alarm.

Chernivtsi photographer Mykola Havka demonstrated then that the reports were a low-grade fake.  He explained to Molbuk.ua that he had been dubious as soon as the first report appeared on nr24.org.  Using the Jeffrey Exif Viewer, he discovered that the photograph of the people sitting in front of a banner with the words ‘Assembly of Romanians of Bukovyna’ had been produced on July 19, 2015, 8 days before the supposed conference.

Arkady Opaits, Head of the League for the Defence of the Rights of National Minorities, also believes that the Kremlin was behind the fake.  The idea,  he told Molbuk.ua, was to throw a ‘cheap bone’ at the Internet and see which hungry dogs grab at it.   It is the Kremlin, he says, that is making every effort to destabilize the situation in Ukraine, including in its western oblasts.

Neither Opaits, nor his colleagues who have connection with Romania had ever set eyes on any of the people in the photo.

Regrettably the ‘cheap bone’ back in July last year did find a taker.  For reasons that remain unclear, Thomas Barrabi writing for the International Business Times deemed the Kremlin-funded Sputnik International to be a reliable source of information about events in Ukraine.  There were other disturbing elements in Barrabi’s report which presented a narrative strongly pushed by Russia.

Barrabi only mentioned his source halfway through the third paragraph.  Even readers knowing Sputnik’s questionable reputation might still be deceived since Barrabi writes as though he has himself spoken with Dorina Chirtoaca, then referred to as a woman.

He goes on to assert that “a similar dispute was at the heart of Kiev’s clashes with pro-Russian separatist rebels in eastern Ukraine .  Various rebel groups have sought to form their own autonomous government within Ukraine”.

Russia’s highly active role in this ‘dispute’ is ignored entirely, and as for its invasion and annexation of Crimea, Barrabi mentions this really only to suggest that Ukraine is a hotbed of separatist tendencies. “Russian President Vladimir Putin claimed that 97 percent of Crimeans preferred Moscow’s rule,  CNN reported.”  In fact, CNN provided a very balanced report on the subject, unlike Barrabi.

There have been many ‘separatist stunts’.  They can seem absurdly shoddy when exposed as fakes.  Ukraine learned to its cost that not all are exposed, and their danger should not be underestimated.