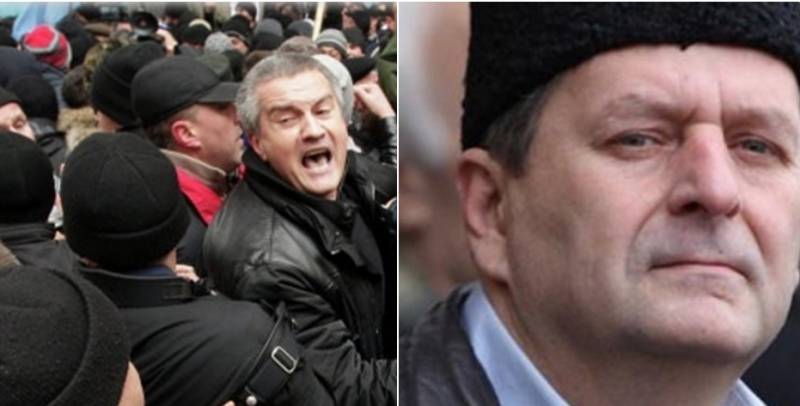 Russia has held Akhtem Chiygoz, the Deputy Head of the Crimean Tatar Mejlis, in prison for two and a half years on legally absurd charges of ‘organizing’ a demonstration which took place before annexation and therefore unequivocally on Ukrainian territory and under Ukrainian law.

Since Russia’s own criminal code prohibits such a prosecution, this should have been the end of the story.  Instead, the occupation regime it installed in Crimea has continued the farce, and amassed a vast amount of ‘evidence’ aimed at proving it’s claim that Chiygoz organized a ‘mass riot’ on February 26, 2014.  In this version of reality, only the Crimean Tatars on the pro-Ukrainian side were guilty of disruptions, while the pro-Russian demonstrators present were all ‘victims’.

Chiygoz’s ‘guilt’ was presumably supposed to be proven by the kilograms of documentation.

Nikolai Polozov, Chiygoz’ lawyer, has been regularly providing vital information about the course of the ‘trial’.  He believes that a lot of inconvenient documents were cleaned out before the case reached the court, however they did this carelessly, assuming that the defence would not bother their heads about the content.  It was a bad miscalculation.  The defence has scrutinized it and so too, it is to be hoped, with the International Criminal Court which has already found, in a preliminary conclusion, that Russia’s invasion and occupation of Crimea constitutes an international military conflict.

Having been asked to help identify people on photos and videos, the head of the Sevastopol ‘Centre for Countering Extremism’ helpfully provided Ukraine with some important information.  Among those present at the pro-Russian part of the demonstration were the so-called ‘private military company’ Black Sea and a paramilitary Cossack organization from Sevastopol.

Who was behind this private military company and how it came to be there certainly warrant investigation, but so too do their actions that day.  Polozov notes that the ‘investigator’ was aware back in March that members of both a military and a paramilitary organization had been at a peaceful demonstration, yet never made any attempt to probe their behaviour.

Although there are more important reasons why the renowned Memorial Human Rights Centre declared Chiygoz, Ali Asanov and Mustafa Degermendzhy political prisoners, such as the illegality of the whole prosecution and the clear targeting of Crimean Tatars, it did also point to serious doubts about most of the supposed ‘victims’.

The falsification is sometimes absurdly pointless.  For some reason, the prosecution has decided to try to prove that the pro-Russian demonstration that day was legal, and the pro-Ukrainian ‘unauthorized’.  This only draws attention to the fact that the demonstrations were under Ukrainian legislation where there is no official requirement to provide notification of a demonstration so many days in advance.  The prosecution even tried to cite an opinion provided by the Council of Europe’s Venice Commission and OSCE, in which four days is recommended.  It may well be, if pulled out of context, but even if they were recommending such a period for any time and situation, which they are not, it would still remain only a recommendation.

In fact both notifications were provided on the day itself, making the whole exercise rather meaningless.  Just as unsuccessful were their attempts to falsify the date on the ‘Russian Unity’ notification so that it preceded the Mejlis-organized pro-Ukrainian demonstration.  Polozov has demonstrated that the date is falsified, with the lie given by the Ukrainian stamp confirming receipt of the document.

There is considerable evidence that Russia was planning to use certain pro-Russian politicians in Crimea to bring about a supposed change in Crimean status without the overt use of Russian soldiers.  It failed thanks to the Mejlis and around 10 thousand Crimean Tatars and other Ukrainians who gathered with both Ukrainian and Crimean Tatar flags.  There was no mass riot that day, and these ‘trials’ bear all the hallmarks of politically-motivated persecution, probably motivated by revenge for having foiled the Kremlin’s plan for seizing Crimea without soldiers and the resulting international condemnation.

See also:  Jailed for proving that Crimea did not ask for annexation