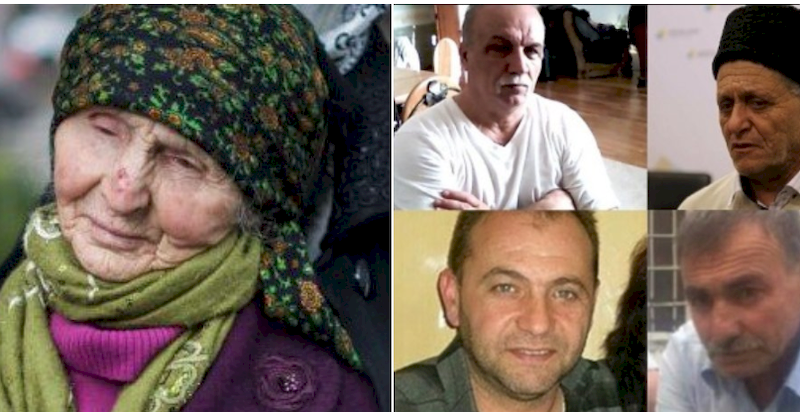 When a case that began with the arrest and death of an 83-year-old veteran of the Crimean Tatar national movement seems to have hit rock bottom, Russia’s FSB proves it can sink even lower.  Not only has there been no attempt to investigate the death of Vedzhie Kashka, but the occupation regime is directly endangering the life of three of the other Crimean Tatars arrested in the same cynical attempt to discredit the Crimean Tatar Mejlis [representative assembly] and national movement.

The health of 60-year-old Kazim Ametov, one of the four highly respected Crimean Tatars arrested on 23 November 2017, is giving serious grounds for concern, yet even an appeal is problematical, since Ametov has been held in custody illegally since the middle of January.  He, Asan Chapukh; Bekir Degermendzhy and Ruslan Trubach had been in custody for two months, from 23 November 2017.  A ‘court’ hearing on January 12 extended the detention of the other three men, despite the mini-stroke that 65-year-old Chapukh had suffered in the SIZO [remand prison] and Degermendzhy’s severe asthma which doctors say preclude his imprisonment.

It cannot be said that Kazim Ametov was totally forgotten.  The problem is that the Russian occupation regime has imprisoned too many political prisoners, including Ernest Ametov, one of six men from Bakhchysarai, arrested on October 11, 2017.

It was Ernest Ametov’s details that were provided on January 12, meaning that he was unnecessarily ‘remanded in custody’ again, while Kazim Ametov was forgotten – though left behind bars.

The conditions in the Simferopol SIZO are truly appalling.  The cells are overcrowded, with men having to sleep in turns, and are infested with cockroaches, rats and other vermin.  The food, even when in principle it is acceptable for Muslims, is inedible, and all those held there complain that it is hard to breathe in the cells.

All of this has had a major effect on Kazim Ametov’s state of health, with heart pain and high blood pressure a matter for real concern.  His lawyer Emil Kurbedinov will be submitting complaints on his behalf, and asking for a proper medical examination.  He says that he has not been able to lodge an appeal against the last court ruling since his client was not mentioned in the ruling passed by Viktor Mozhelyansky, a ‘judge’ who has been especially active in imprisoning Ukrainians on politically motivated charges.

The de facto ‘High Court’ has, in any case, for the second time refused to consider the other men’s appeals, sending the material back to the first instance court for ‘reworking’.  This is while two of the three other men are in grave need of proper medical treatment and should not be in detention.

83-year-old Vedzhie Kashka, victim of the 1944 Deportation and veteran of the non-violent struggle of the Crimean Tatar people for their rights, died on November 23, 2017, after Russian FSB and other enforcement officers burst into a restaurant where she was meeting three men whom she had asked to help her.

The men forced Bekir Degermendzhy and Asan Chapukh, older men known to have serious medical conditions, to the ground and then arrested them.  They then seem to have gone after Vedzhie Kashka and Ametov, with this directly and swiftly resulting in the elderly lady’s death.

Prominent lawyer Nikolai Polozov has long pointed to the extraordinary failure of Russian-controlled authorities to even initiate an investigation into Vedzhie Kashka’s death.  He announced on February 9 that, at the request of her family, he will be undertaking an independent investigation.  He is “convinced that her death was in no way a tragic accident, but the result of excessive and disproportionate use of force by those Russian enforcement officers who had carried out her unlawful detention”.

As reported. Russia is following yet another sordid Soviet tradition with the so-called ‘Vedzhie Kashka case.  After gaining too much negative publicity for punishing dissidents for so-called ‘anti-Soviet propaganda and agitation’, the KGB turned to trying to discredit dissidents with the use of concocted criminal prosecutions.

Now the Russian FSB have used a Turkish man who had been friendly with Vedzhie Kashka’s granddaughter, had taken 7 thousand USD and refused to return it.  The elderly lady had asked Degermendzhy, Chapukh and Ametov to help her get her money back.  This, the FSB decided to claim, was an attempt at ‘extortion’.

It is possible that Yusuf Aigan seized on the idea of contacting the FSB in order to get to keep the money.  It is equally likely that the FSB approached him to manufacture a supposed ‘case’ involving an economic crime.  This, helped by the Russian media, they have even presented as a “Mejlis’ crime, presumably to try to justify their extraordinary ban on the Mejlis which they are refusing to retract despite a direct order from the International Court of Justice.