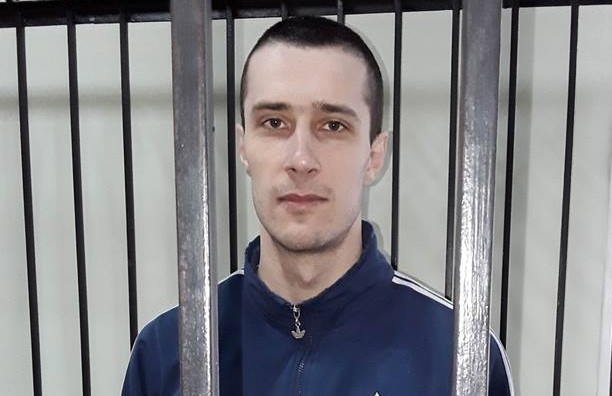 Three Russian judges have confirmed the four-year sentence passed on Oleksandr Shumkov, ignoring not only compelling evidence that he was abducted to Russia, but also at least two basic legal principles. The 29-year-old Ukrainian was charged in connection with activities carried out in Ukraine and with involvement in the Ukrainian nationalist movement Right Sector, although this involvement ended before Russia declared the movement illegal.

Shumkov openly demonstrated his contempt for those involved in these court proceedings, calling them Russian President Vladimir “Putin’s lackeys”.  He promised that his ‘final words’ would come when he returned to Ukraine, and that he would do all he could in order that Ukraine becomes “able to shut the mouth of any aggressor who takes it upon themselves to decide what Ukrainians can and can’t do in their own country.”

One of the ‘secret witnesses’ had claimed to have seen Shumkov at the Chonhar checkpoint on the administrative border with Crimea during the Crimea Blockade in September 2015, and that Shumkov had been giving instructions to 7-10 people. It transpired that he had not heard these instructions, but claimed to know that this was what Shumkov had been doing because he was told this by an SBU [Ukrainian Security Service] officer who had infiltrated Right Sector.  How the latter was supposed to have known was not revealed.

The prosecution’s ‘key witness’ was a Ukrainian from Kherson called Mykhailo Allanazarov who claimed that Shumkov had taken part in Right Sector protests (around five) in the Kherson oblast right up untill 2017.  Allanazarov is a deserter facing criminal charges in Ukraine for trading in weapons and drugs, and had a clear motive for providing the testimony demanded of him.

Now that the appeal has been rejected, he is likely to be moved, however this will not be immediately and it is important for him to know that he is not forgotten.  Our letters also send an important message to Moscow that Russia’s politically motivated abductions and imprisonment of Ukrainians cannot be covered up.