Russia abducts activist from Ukraine, charges him with involvement in Ukrainian organizationUkrainian abducted to Russia faces ‘trial’ for protest in Ukraine against Russian occupation of CrimeaRussia’s trial of abducted Ukrainian turns ever more surrealUkrainian jailed as ‘extremist’ in Russia for a Facebook post asking for tyresUkrainian gets jail sentence in Russia for involvement in a legal organization in UkraineUkrainian gets prison sentence in Russia for peaceful protest in UkraineRussians brutally tortured and sometimes killed Ukrainian civilians in village school in Kherson oblast Russian paramilitary wanted by Ukraine over role in annexation of Crimea could face 15-year sentence in Czech republic"Did the Chechens cut your heads? No? We will do it..."Abductions and feared mass grave of Russian invaders" victims in liberated Vysokopillia (Kherson oblast) Ukrainian volunteer asphyxiated, beaten and half-starved in Russian ‘filtration’ concentration campThe application practice of Article 391 of the Criminal Code of Ukraine proves that this Article should be canceledRussian invaders demand Ukrainians have ‘filtration’ stamps and permits to live in their own citiesRussian invaders use Mariupol supermarket to dump the bodies of their victims Russia invades Crimea and sentences Ukrainian academic to almost 20 years for ‘treason’Russian Rule of Lawlessness in Occupied Crimea and DonbasStand With Ukraine! Address to the International Community by Ukrainian Human Rights DefendersRussia claims it prevented a ‘Ukrainian radical terrorist attack’ in occupied Crimea Staged Donbas ‘evacuation’ and fake sabotage in Russia’s war against Ukraine. Where are the sanctions?Czech court to decide if armed Russian paramilitary awarded for his role in the invasion of Crimea is extradited to Ukraine
• Topics / News from the CIS countries 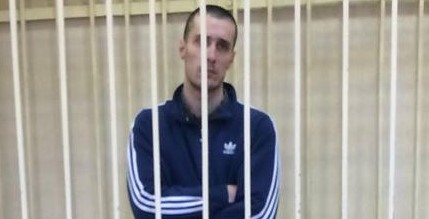 The authoritative Memorial Human Rights Centre has declared 28-year-old Oleksandr Shumkov a political prisoner, finding both the circumstances by which the Ukrainian soldier came to be in Russia, and the charges against him extremely suspect.  There are strong grounds for believing that Shumkov was abducted from Ukrainian territory, and the charges that Russia has brought are truly surreal.  Shumkov is accused only of membership in Ukraine of the Right Sector  movement, which Russia has demonized since 2014, but which is perfectly legal in Ukraine.

It was on 26 September, over a month after he vanished, that Larisa Shumkova received a letter from the Russian FSB for the Bryansk oblast saying that her son was held in the Bryansk SIZO [remand prison].  The letter states that Oleksandr was detained on September 6 on suspicion of “committing a crime” under Article 282 § 2 of the Russian criminal code – ‘involvement in an extremist organization’.

Ukraine’s police have ascertained that Shumkov crossed into Russia on 23 August 2017, together with three other individuals. A criminal investigation has been initiated over his abduction and imprisonment.

Shumkov had taken part in Euromaidan and in 2014 was a guard for Dmytro Yarosh, the then leader of the ultra-nationalist ‘Right Sector’, before joining the Armed Forces.  Although his family says that Shumkov was not a member of Right Sector in 2017, his former Maidan activism, link with Yarosh, as well as his current military role made it very evidently dangerous for him to go to Russia.  He would have also known about the political trial and huge sentences passed in Russia on Crimean filmmaker Oleg Sentsov and civic activist Oleksandr Kolchenko, despite the lack of any evidence at all of the ‘Right Sector terrorist plot’ they were accused of.

As with previous abductions of Ukrainians, Russia will doubtless try to claim that Shumkov also ‘illegally crossed the border’.  It was certainly illegal, but this was because Shumkov was taken against his will.

The Russian Investigative Committee for the Bryansk oblast has laid charges of ‘committing the crime envisaged by Article 282.2 § 2 of Russia’s criminal code – taking part in an extremist organization” which carries a sentence of up to six years’ imprisonment.

This supposedly ‘extremist organization’ is Right Sector which was banned in Russia in November 2014.

There is a long indictment in which it is claimed that Right Sector “is aimed at violently changing the constitutional order and violating Russia’s territorial integrity, undermining state security and also at propaganda for justifying and carrying out extremist activities in Russia.”  All of this is essentially nonsense, however Right Sector members may well want to use force to end Russia’s illegal occupation of Ukrainian Crimea, which Russia would claim was ‘violating its territorial integrity’.

The indictment says that Shumkov was aware of the above, and did not leave the organization, and continued taking part in its activities including during military operations in the fighting zone up to 23 August 2017.

The Investigative Committee is undaunted by the fact that Shumkov is a Ukrainian citizen, not Russia, and that any activities in Right Sector were in Ukraine where the organization is legal.  It cites Article 12 § 3 of Russia’s criminal code which prohibits the prosecution of non-Russians for actions committed outside Russia, and notes that an exception is made “in cases where the crime was directed against the interests of the Russian Federation”.

The Memorial Human Rights Centre gives an annihilating assessment of this case, and not merely because a Ukrainian is accused in Russia of activities in Ukraine linked with an organization which is legal in Ukraine.

It considers the assertion that Right Sector’s activities in Ukraine are aimed at overturning the constitutional order in Russia and undermine Russia’s security to be trumped-up.  There is no evidence that Shumkov had acted against Russia’s interests by joining or being a member of Right Sector.

Memorial also questions the decision by Russia’s Supreme Court on 17 November 2014 to ban Right Sector and says that the arguments given are dubious, and based on at very least unproven assertions.

It gives a number of reasons, including the fact that the charges against Oleg Sentsov were used as supposed justification for the ban. There was no evidence of any link between Sentsov and Right Sector, and the charges against him (as well as against three other opponents of Russia’s annexation of Crimea) were falsified. Memorial also points out that the decision to ban Right Sector was taken long before Sentsov and Kolchenko were convicted of the charges (details about the ‘trial’ here).

Memorial HRC states that the political motives behind the persecution of Oleksandr Shumkov are evident.

“It reflects the essence of the Russian-Ukrainian armed conflict.  On the one hand, Russia officially denies any part in the conflict, while on the other it takes an obviously anti-Ukrainian position reflected in propaganda; in the unofficial military support for the self-proclaimed ‘Donetsk and Luhansk people’s republics’, in the political persecution of people supporting Ukraine and Ukrainian citizens; and in the ban of a number of Ukrainian nationalist organizations around half a year after the beginning of the war.”

The strange circumstances by which Shumkov came to be on Russian territory suggest that he was abducted, which also points to the political motives behind this case.  Memorial HRC concludes that Shumkov’s imprisonment is motivated solely by his nationality and demands his immediate release.

Oleksandr Shumkov is one of at least three people held illegally in Russia on charges linked with Right Sector.  See also: