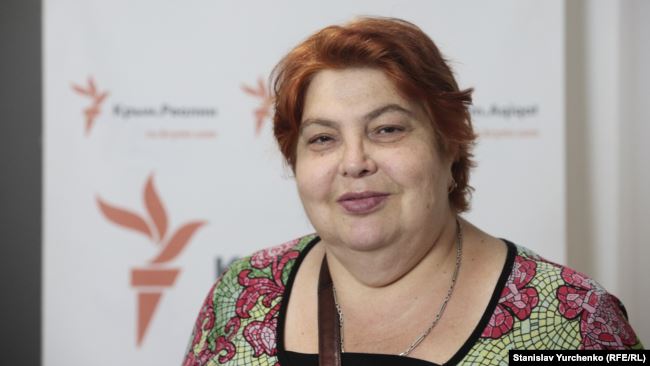 Larisa Kitaiska is safely back in Kyiv, after a trip to her native Yalta in July 2016 resulted in her arrest by the Russian occupation authorities for supposedly ‘anti-Russian’ material on Facebook.  She was put on ‘trial’ and given a two-year suspended sentence, during which she had to remain in occupied Crimea.  Her husband died, without her present, in Kyiv just days before Russia quashed the conviction in January 2019, due to a minor change in Russian legislation.  This was not, however, before she had been effectively detained in Yalta for two and a half years and placed on Russia’s so-called ‘List of Terrorists and Extremists’, a list that already contains a significant number of Ukrainian political prisoners.

Kitaiska, who had never concealed her pro-Ukrainian position, had left Crimea after Russia’s invasion and annexation.  She spoke to Krym.Realii of the atmosphere of fear that you now see in Crimea.  “People have become afraid, filled with a kind of paralyzing fear.  They’re frightened to say anything”.  She says that she spoke with one Crimean Tatar family who didn’t know who she was, and didn’t want to talk with her, fearing provocation.

“It’s like in Soviet times with all conversations having been moved to the kitchen.  Although I would like to say that there is sometimes a breakthrough.  When they arrested the Ukrainian seamen, my doors didn’t stop opening.  We collected 11 thousand in 40 minutes…*. When I arrived at the end of May, those who had been afraid to drop in to my home, did come.  People are tired, there are very few so-called ‘kolarado’ ribbons on cars (the orange and black St. George ribbons worn by those supporting Russia’s occupation of Crimea and Donbas.  The term is in reference to Colorado potato beetles).   That is, they all understand everywhere, you’ll find hardly anyone stubbornly insisting that everything’s become good”.

Kitaiska notes that there was a huge amount of publicity over her arrest, while the termination of her prosecution was carried out swiftly and with minimum noise.

The then 52-year businesswoman was detained by the FSB on July 18, 2016, with a search carried out of her home in Yalta.  She was not held in custody but was forced to sign an undertaking not to leave Yalta, although her family and life had been in Kyiv since 2014.  She complained at the time that she had been put under ferocious psychological pressure to ‘confess’

Kitaiska had initially thought that the FSB’s persecution could be aimed at seizing control of her flat, however she is now convinced that it was due to her openly pro-Ukrainian position.

“The thing is that I was one of the people who organized pro-Ukrainian protests specifically in Yalta, and the whole city knew about that.  I think my prosecution was because they needed to have some kind of show trial in Yalta.”

Kitaiska says that they had to pull out most of the so-called ‘self-defence’ paramilitaries in Yalta in order to get testimony against her.  Each was copied according to the blueprint, saying “I don’t personally know Kitaiska but what is written here is typical of her views, typical of her.”

She notes that the post that the FSB decided to call ‘extremist’ was not even hers.  She assumes that they hacked her account, with a poem containing foul language ‘appearing’ on it.

On 28 December 2017, ‘judge’ Volodymyr Romanenko from the Russian-controlled Yalta City Court convicted Kitaiska of ‘incitement to enmity’ (under Article 282 § 1 of Russia’s criminal code).

The entire prosecution was dropped, after the occupation regime had prevented Kitaiska from being with her husband when he died, due to amendments made to Article 282.  This had become one of Russia’s most notorious ‘extremism’ charges used in many political prosecutions.

The amendments made so-called ‘actions aimed at inciting enmity or hatred’ initially an administrative, rather than a criminal, offence, with a first instance being treated under the Code of administrative offences, resulting in a fine.  The supposed ‘incitement’ would only be deemed a criminal offence if there was a repeat charge in the space of a year.

*More details of the surge of support for the 24 Ukrainian POWs whom Russian seized after its attack on 3 naval vessels near Crimea on 25 November 2018 here: Crimeans rally to help 24 Ukrainian POWs seized in Russia’s Azov Sea attack