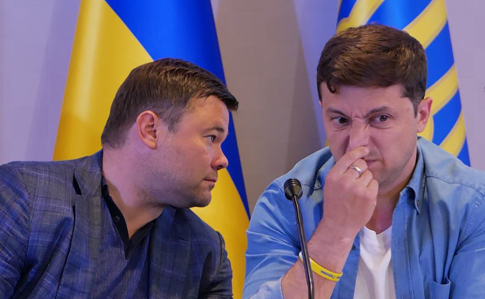 Prominent Ukrainian media have reacted sharply to the recent fake news issued to the media by members of the President’s Office and the subsequent comments from President Volodymyr Zelensky and Andriy Bohdan.  The disinformation concerned Bohdan and his purported resignation from his highly controversial post as head of Zelensky’s Administration. Bohdan twice held high posts in the regime of Viktor Yanukovych and is therefore prohibited from holding such a post by the Law on Lustration.  Zelensky has tried to get around this by changing the title of his administration.  By calling it the Office of the President, which is nowhere mentioned in the lustration law, the claim is that the ban on Bohdan does not apply.

On Thursday evening, 1 August, Interfax.ua reported that Bohdan had, nonetheless, signed a letter of resignation.  Shortly afterwards, some media posted what appeared to be a copy of the handwritten resignation letter.. The story was reported by a number of media, not known for circulating information without checking it.  One of the problems appears to have been that for some time, members of the Zelensky team refused to either confirm or refute the information.  It was quite a bit later that the TV channel ‘Nash Maxi TV reported that Bohdan’s Deputy, Ruslan Ryaboshapka, had refuted the information when directly asked by the channel.

It was only the following day that Zelensky himself reacted.  Although many media ran headlines confirming a letter of resignation, others were careful to stress that Zelensky had said that they had all written letters of resignation.  “We are not clinging to power”, he said, explaining that the letters would be used if somebody understand that they were not coping with the task.  He did add that Bohdan had not signed the letter, and Bohdan later also reiterated that “we all wrote letters of resignation”.

The first problem is that many reputable media are adamant that they received the information and / or a copy of the letter from a source within the President’s Office whom they believed could be trusted.  The name most often mentioned was that of another Deputy Head, Kyrylo Tymoshenko, though he later denied having circulated the information.

Interfax.ua was forced to report that the information was ‘cancelled’.  This is not something that it, or other media, like to do, and many feel very angry.  Yulia Mostova, the Chief Editor of Dzerkalo Tyzhnya, one of the publications who earlier cited Tymoshenko as their source, said that the person who had circulated to the media the (unsigned) letter of resignation should be considered “a source of manipulation, not of information”. This was the first time in her memory that a fake had been spread through the most generally reliable media.

Bohdan’s subsequent assertion that Zelensky and his people do not need the media as ‘go-betweens’ has also disturbed representatives of the media, as a statement issued on 5 August by the ‘Media for an Informed Choice’ Movement makes clear.

The statement, endorsed by a large number of mainstream media and journalists, “warns President Zelensky’s team that society is not only your friends and followers” and that they should refrain from acts of provocation against the media.

“The new administration’s willingness to spread disinformation is a disturbing warning bell which demands from journalists that they not forgot to thoroughly check statements and to strictly monitor the actions of politicians.”

The authors go on to explain the events from the first report about the non-existent resignation, and note that the President has asserted that circulation of the information did not constitute disinformation.

Zelensky was asked if he thought Bohdan should be dismissed because of the fact that the public had been fed disinformation, and that the incident had undermined trust in the media. Zelensky used one of his smiles aimed at charming the public and asserted “I didn’t undermine anything”.  Rather than address the actual question, he went on to reiterate that his “guys” are not drug addicts and not clinging to power.

Bohdan also very deliberately refused to address the issue of how an unsigned letter had been reported to the media as his resignation.  Instead he suggested that the media should not act as the public’s voice and claimed that Zelensky and his team “communicate with the public directly, without intermediaries”.

The media representatives point out that the Office of the President deliberately encouraged the circulation of false information. “They gave a copy of the resignation letter simultaneously to several journalists and for 24 hours did not confirm or refute the report.  We are thus talking about deliberate provocation against the media”.

It is unacceptable, they stress, “when public officials and politicians deliberately circulate false information and undermine the public’s confidence in the media. Of particular concern was the reaction of President Zelensky who did not recognize the incorrect nature of the actions of his subordinates.

We consider it to be manipulative to juxtapose direct communication by politicians and members of the public via social media with ‘indirect’ communication via the media. Both are necessary components for political transparency.

One of the main tasks of the media is to monitor politicians; to put questions, including those that are uncomfortable, to them and to seek answers.  Those in power are obliged, in their turn, to be open to the media.

Accountability of those in power to the public via the media cannot be replaced by comfortable communication by MPs in social media, after all the public are not only their ‘friends’ and ‘followers’.

We believe that the President and his team should draw important conclusions from this situation and not allow such statements and actions to be repeated.”

The authors also hope that this incident will serve as a warning to journalists to not rely on non-transparent relations with politicians, leaks, etc., but to concentrate on transparency, on checking facts and scrupulously maintaining professional standards. “For the media, the main thing is to remain needed by their audience, providing them with swift, quality and accurate information and articulating the needs of the public to those in power and politicians”.

Although some media did not endeavour to independently verify the information because they trusted the media source, the situation is particularly unnerving because others did check.  What, in that case, do you do, if you are sent an apparent letter of resignation, albeit without formal confirmation of the report?  With hindsight, it is possible to point to the fact that a signed copy of the letter was not circulated, but it was handwritten, and the information does seem to have come from the President’s Office.

Why, remains unclear, unless the sole aim was indeed to undermine confidence in the media.  As well, perhaps, as to distract from the valid question of what Bohdan is doing still in office in breach of the law on lustration.  It is hard to believe that a criminal offence or similar would cease to be illegal, just because a different word was used in the Criminal Code, and changing the name of the President’s Administration should surely not alter the intended inclusion of the head of that administration in the lustration law.