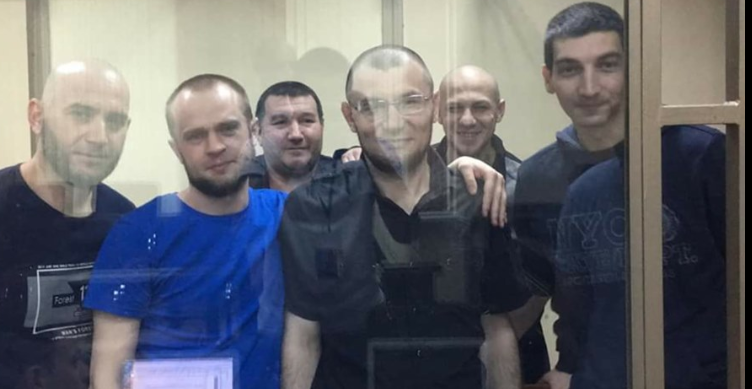 A Russian prosecutor has demanded almost 100 years in the total sentences against six Crimean Muslims, including human rights activist Emir-Usein Kuku.  All six men are recognized political prisoners and Kuku is also an Amnesty International prisoner of conscience.  These are the highest sentences demanded so far in Russia’s persecution of Ukrainian Muslims on deeply flawed charges.  It is unclear whether this is reprisal for the publicity the case has generated, or part of Russia’s policy aimed at terrorizing and silencing Crimean Tatar civic activists and journalists.

This is the second ‘trial’ of the six men after the first was abruptly stopped.  The purported reason was shocking in itself, as the judge suddenly announced that the case was being sent back to the prosecutor for the requalifying of the charges against one of the men, Envir Bekirov to a more serious charge.  This was probably a pretext to stop the proceedings after one of the so-called ‘secret witnesses’ identity was revealed.  There is reason to believe that this individual was tortured and blackmailed into giving false testimony against the other men.

There is nothing in this case that could remotely warrant criminal charges in a law-based democracy.  All six men are accused only of unproven ‘involvement’ in the peaceful pan-Islamist movement Hizb ut-Tahrir which is legal in Ukraine and most other countries.  Russia’s Supreme Court ruling declaring it a ‘terrorist’ organization was handed down in secret and probably as a method of enabling Russia to send Uzbek asylum-seekers back to face religious persecution in Uzbekistan.  No explanation has ever been provided as to why Russia alone has so classified a movement which is not known to have committed any act of terrorism or violence anywhere in the world.

On 11 February 2016, the FSB and other armed enforcement officers, most wearing masks, carrying out gratuitously violent searches of the homes of four men: Muslim Aliev; Envir Bekirov; Emir-Usein Kuku and Vadim Siruk.   The men were all taken away and have been in custody ever since.  Two months later, on 18 April 2016, two much younger men, Bekirov’s nephew Refat Alimov and Arsen Dzhepparov were also arrested.

Aliev, and then later Bekirov were charged with the more serious ‘organizer’ role, under Article 205.5 § 1 of Russia’s criminal code.  The other four are accused of ‘involvement’ (Article 205.5 § 2).  It was with this case that Russia’s FSB also added another extraordinarily cynical charge – of planning ‘violent seizure of power’ (Article 278).  The Memorial Human Rights Centre has noted on many occasions that this extra charge is often used against men who refuse to ‘cooperate’ with the FSB.  All the Ukrainian Muslims arrested in occupied Crimea have rejected any such ‘cooperation’, and the new charges are being applied.

Speaking during the ‘court debate’ at the Northern Caucuses Military Court in Rostov (Russia) on 11 October, the prosecutor demanded the following sentences:

It should be stressed that the reason these ‘trials’ are so monstrous is not just that no proof is required, but that the men are facing these sentences for absolutely no crime.

Russia had begun persecuting Crimean Muslims earlier, however the arrest and imprisonment of four Crimean Tatars from Sevastopol in 2015 received much too little publicity and was largely ignored by the international community.  It was the inclusion of Kuku in the second group of victims that finally made international NGOs react.  Kuku had become involved in human rights monitoring after the forced disappearances, armed searches, etc. that came with Russia’s invasion and annexation of Crimea.  He had already been targeted earlier, including in a likely abduction attempt that only turned into an FSB search after Kuku’s cries for help attracted attention.  Despite that occasion in April 2015, and other attempts to prosecute Kuku, it was only in February 2016 that Hizb ut-Tahrir charges were even mentioned.

There is considerable evidence that the same FSB officer, Alexander Kompaneitsev, is behind the persecution of Kuku; Dzhepparov and that Alimov was arrested after his uncle refused to provide the false testimony that Kompaneitsev demanded.  There is also witness testimony of the torture methods that Kompaneitsev used to try to get others to testify against the men.

The men’s lawyers have repeatedly provided proof of falsification, of alleged evidence from Kuku’s computer which was, however, created months after he had been arrested and the computer removed.  These are, however, political trials, and the judges will, at the very most, only reduce the sentences demanded, although each of the men should be acquitted and released immediately.

The arrest of Kuku (and Aliev) for their activism was a first signal of what was to come.  By now, at least half of the 55 men currently serving sentences or in detention on Hizb ut-Tahrir charges are civic activists and / or journalists.  Russia is evidently using such prosecutions as a method of terror against  the Crimean Solidarity civic initiative and against Crimean Tatars.