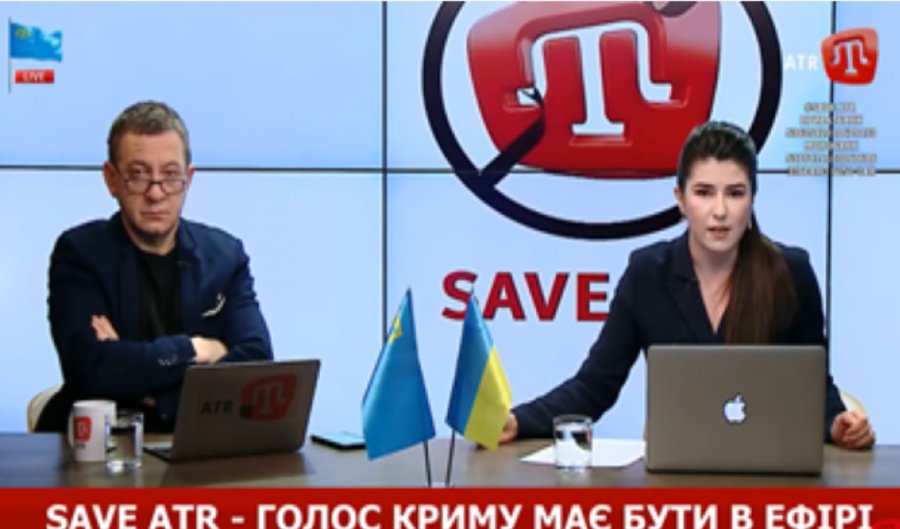 One of the very few sources of truthful information about Russian-occupied Crimea is in danger of falling silent with the threat coming not from the Russian aggressor state, but from Ukraine’s government.   This is not the first time that vital funding has suddenly dried up, but the situation now differs radically, with claims that the money has not been allocated for TV ATR alone and vague noises about ‘competitive tenders’.  ATR plays a pivotal, and unique, role in fighting Russia’s information war through broadcasts in Ukrainian, Crimean Tatar and Russian and it is manifestly absurd to block its work for the sake of imaginary ‘competition’.

The above-mentioned assertions were made by Oleksiy Reznikov, Deputy Prime Minister and Minister on Reintegration of Temporarily Occupied Territory, during a Ukrinform interview on 5 February.   Asked if funding for TV ATR would be reinstated, Reznikov claimed that the law on the state budget allocates 50 million UAH for all media broadcasting on occupied territory on a competitive basis, in accordance with public procurement legislation.  He added that, unlike in previous years, the budget for this year does not have anything about direct funding for Atlant-F, the owner of ATR.  There was, however, information on the ministry’s website and he did “not see any problem with the channel taking part in the competition”.  Reznikov even acknowledged that ATR is the only Crimean Tatar broadcast, and said he did not doubt that it would receive “part of this money”. He also claimed that some other media had already expressed interest, naming, among others, Krym.Realii.  This is a very strange assertion since Krym.Realii is part of RFERL, which is financed by US federal grants as a private grantee and could not be looking to other states for financial support.  Reznikov later, by telephone in a live broadcast, repeated this claim.  That prompted Volodymyr Prytula, Editor of Krym.Realii, to publicly state that they had not made any appeal to the ministry, and had no intention of doing so.

According to Aider Muzhdabayev, the Deputy Director General of ATR, this was by no means the only inaccurate information that Reznikov gave.  Muzhdabayev also rejects the Minister’s claim that Ukraine’s Accounting Chamber objected to the financing of ATR and points out that the relevant documents are openly available on the Chamber’s website.  The same applies to the claim about similar concerns from the Treasury.

He is equally scathing about the idea of a ‘competition’ and the vague and unspecified nature of this undertaking (during the above-mentioned phone call, Reznikov spoke of it beginning in March this year).  Muzhdabayev also asserts that the 50 million was allocated specifically for ATR, as in previous years, and cites the code that the money has as confirmation of this.

Muzhdabayev believes that this is a deliberate attempt to at least partially silence ATR, in order to remove questions linked with Crimean Tatars facing particularly fierce repression under Russian occupation, etc. so as to not irritate Moscow too much.

There is, unfortunately, another possible explanation. It is much easier ‘to lose’ money allocated, apparently to various recipients.  In October 2020,  Reznikov’s ministry was almost certainly actively involved in the quiet ‘reallocation’ of funding set aside for supporting the huge number of Russia’s Crimean Tatar and other Ukrainian political prisoners and their families. On that occasion, the new recipient of political prisoners’ badly-needed assistance was an amorphous ‘state enterprise’ and there was no suggestion that Reznikov’s ministry had held a competition for the person appointed to head it (details here).

In the Ukrinform interview, Reznikov also stated that, at the suggestion of a member of the Polish government, he had sent an appeal to a number of countries asking them to consider financial support for ATR.

While support for further expanding the enormously important work that ATR does would certainly be welcome, Reznikov’s begging letter seems particularly shocking at a time when it is seemingly his ministry’s actions that are placing the channel’s very existence in jeopardy.

Gulsum Khalilova is one of the many Crimean Tatars who were forced from their homeland after Russia  drove ATR and most other Ukrainian media into exile. In impassioned comments during the Save ATR marathon, she asked how they were supposed to wait for this nebulous ‘competition’.  How can they fall silent in the meantime while there is no let up in Russian repression in occupied Crimea?  Khalilova has every reason to know, as she is one of at least two ATR presenters whom Russia would imprison for years if she were to return to Crimea.  A grotesque 19-year sentence was recently passed in absentia against ATR Director, Lenur Islyamov).

Khalilova goes on to say that she can simply not understand “how efforts to silence the voice of a television channel which is the voice of Crimea fits with the strategy for Crimea’s deoccupation” (which the administration of President Volodymyr Zelensky is boasting of). “I genuinely can’t fathom how trying to put pressure on a channel whose employees left for mainland Ukraine, sacrificing for this their homes and loved ones, in order to fight for Crimea on the information front, fits with plans for the reintegration of Crimea”.

A year ago, Ilmi Umerov, Deputy Crimean Tatar Mejlis head and former political prisoner, warned that by blocking ATR, Ukraine would be giving up Crimea.  The warning remains just as real today, and no fine phrases about a ‘Crimean platform’ and strategies for reoccupation will remove the responsibility from Ukraine’s leaders if they so aid and abet Russia’s occupation of Crimea and aggression against Ukraine.