Ales Bialiatski : A Belarusian Prisoner for a Noble Cause 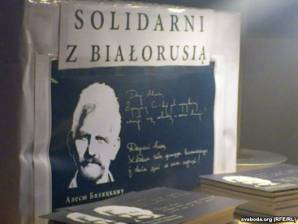 By almost any standard, Ales Bialiatski is a hero.

Bialiatski has received many international awards for his tireless defense of human rights in his home country of Belarus. Most of his work as an activist has focused on defending the human rights of Belarusians, providing legal defense to political prisoners and their families, and supporting human rights initiatives in the country.

Alas, on September 25, Bialiatski marked his 49th birthday in prison. He has already spent nearly two months in jail as he awaits trial and a probable guilty verdict under the Belarusian justice system. The charges against him -- large-scale tax evasion for funds received through foreign banks accounts -- may not at first appear to be politically motivated, but there should be no denying that his arrest and prosecution are entirely political in nature.

Anyone familiar with the justice system of Alyaksandr Lukashenka, the “last dictator in Europe, ” and the conditions facing Belarusian human rights defenders will attest that Bialiatski’s jailing is undeniably a retaliatory measure for his work promoting a more democratic future for Belarus.

Viasna, the human rights group founded by Bialiatski, has been one of the few brave forces of resistance to Lukashenka’s dictatorial regime, now in its 17th year. The Minsk regime has singled Bialiatski out for special attention because he is the most authoritative human rights defender in Belarus, and cracking down on him sends an unambiguous signal to all those who rally to the cause of greater freedom.

Bialiatski has a long-standing track record as an activist, having started his career as a dissident while attending university back in the days of the Soviet Union. In 1996, when Lukashenka began jailing political activists, Bialiatski created and headed “Viasna-96” (later shortened to “Viasna, ” which means “Spring”). In 2007 he also began serving as the vice-president of the International Federation for Human Rights (FIDH). He has been a thorn in Lukashenka’s side throughout.

It is a typical modus operandi of repressive regimes to persecute their opposition by levying financial charges against them. Bialiatski is not accused of defending political prisoners, providing them with legal aid, or assisting their families. Rather, he is charged with failing to pay taxes on funds he received from abroad. The authorities know full well that Bialiatski was using these funds to aid the families of political prisoners.

The reason why funds from international donors were placed in Bialiatski’s personal account outside of Belarus is simple. By 2003, Viasna was considered to be a threat by Belarusian authorities, and they refused to re-register it. Despite a ruling by the UN Human Rights Committee that the denial of Viasna’s registration violated its members’ rights to freedom of association, the authorities remained bent on marginalizing the organization by every means at their disposal.

In 2006, the Belarusian authorities launched an effort to counter the activities of Viasna, as well as other human rights organizations and civil society groups in Belarus, by criminalizing activities linked to unregistered nongovernmental organizations. As a result, Viasna was forced to rely on accounts in neighboring Lithuania and Poland opened by Bialiatski in his own name in order to continue to function.

The Belarusian authorities considered prosecuting Bialiatski under this new legislation, and in February 2011, the Prosecutor-General’s Office issued an official warning to Bialiatski. However, taking legal action against an unregistered group which had tried numerous times to reregister would have been too obvious an example of politically motivated persecution.

A more sophisticated scheme had to be devised, and Polish and Lithuanian authorities unfortunately facilitated Belarusian efforts to jail Ales by providing sensitive banking information as part of longstanding law enforcement agreements with Minsk. These agreements, aimed at criminal activity, instead swept up Bialiatski, and while both Vilnius and Warsaw have since taken corrective measures, those steps are too late for him.

In a sense, Bialiatski’s imprisonment demonstrates just how seriously Lukashenka regards the threat posed by his work. It comes as no surprise that the Belarusian regime that has worked so hard to weaken and fragment civil society over the years, and which effectively dismantled its political opposition during the December 19, 2010 elections, would ultimately turn its attention to the country’s leading human rights defender.

All of Bialiatski’s friends and supporters hope that change will come to Belarus so that fundamental freedoms, political plurality, and human rights -- all causes to which Bialiatski has fearlessly devoted his life -- will be respected. We also wish a happier birthday next year to Ales Bialiatski.

David Kramer is president of Freedom House, a Washington-based independent watchdog organization that supports democratic change and human rights. Tatsiana Reviaka is president of the Belarus Human Rights House in Vilnius and a deputy director of Human Rights Center Viasna. The views expressed in this commentary are the authors’ own and do not necessarily reflect those of RFE/RL.