Police continue to deny any wrongdoing in death of Ihor Indylo

The second court examination into the death of young student Ihor Indylo in police custody is continuing in Kyiv.  Yehor Sobolyev reports that Judge Oleksy Panasyuk listens with patience and attention to each witness.

At the court hearing on Wednesday, the former Head of the Shevchenkivsky Police Station, Petro Miroshnychenko, who had left for home the evening that Ihor Indylo was brought it, nonetheless insisted that there had been nothing improper in Ihor’s detention, that he had been treated properly and that he simply died after "falling"

As reported, Ihor Indylo died in the Shevchenkivsky District Police Station in Kyiv in the night from 17 to 18 May 2010.  He should have turned twenty that day.

Despite being at his dacha, Mr Miroshnychenko found no difficulty in describing to the court “what really happened” during the evening. According to his version, there was an accident in the room where they photograph people brought in. The police officer supposedly offered Ihor a chair, but he refused it. “Moving backwards, he fell and hit his head on the floor”, Miroshnychenko claimed.

In response to the startled looks from the Indylo family’s lawyer, given that he wasn’t there, the former head of the station said that he had learned this from his officers.

The latter, he asserts, behaved impeccably. They gave him water, took him to the toilet, and simply pleaded with the ambulance to take Ihor. Why did they plead?  They were concerned for his health, because he’d fallen.  Miroshnychenko at this point said that his former police station most often calls ambulances for any needs of people detained.

Worth noting that in a report for TVi this was viewed from a rather different angle.  With the number of deaths in police custody rising at a frightening pace, the Shevchenkivsky District Court is one of the especially notorious stations.  Reporter Dmytro Hnap spoke to an ambulance driver who was clearly reluctant to speak too openly, but did confirm that they get called out often.

Oleksandr Zarutsky, the lawyer representing Ihor Indylo’s parents asked at that point why the police had not in that case called an ambulance when Ihor fell from the bench in his cell.  Myroshnychenko’s response should be given in full:

With respect to the story presented to the court about Ihor having “fallen” in the room for photographing people is that this room does not have CCTV cameras.  One of the officers charged with exceeding his powers was asked to explain how Ihor fell.  He claimed that he fell on his back, yet there are no injuries to his back as would surely be the case if this was the fall which caused his death.

Myroshnychenko was asked why Ihor who had not screamed abuse and had not shown any resistance had been taken into custody.  He claimed that this was untrue, that Ihor had not only used foul language and shown resistance, but had even grabbed the police officer’s phone when he tired to call for a police car. “The officer was obliged to take him away and isolate him”. 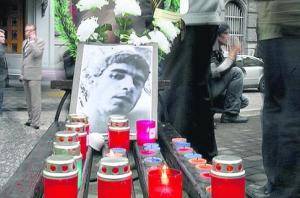