TVi removed from cable networks in 11 citiesUkraine: The authorities should stop harassing independent television channel TViFront Line Defenders on the measures against TVi and Mykola KnyazhytskyCriminal proceedings against another independent media publicationChief Editor of LB.ua leaves Ukraine over threat of criminal proceedingsNew twist in the Landyk scandal with pressure on critical websiteLandik gets suspended sentence and is releasedLandik Trial: Doctor asserts that MP’s son suffered more than his victimTrial begins of Roman LandikRoman Landik and his victim reach an “agreement”Unlike members of the opposition Roman Landik at liberty to wanderRoman Landik extradited to Ukraine to face chargesRussian “extradition check” regarding LandikProsecutor General seeks Landik’s extradition from RussiaCivic activists demand real liability for Deputy’s son LandikProsecutor’s son accused of causing the death of three pedestrians released on bailTwo former subordinates of Yulia Tymoshenko released pending trialJudge is in a hurry with Tymoshenko trialPolish Ambassador: Prosecuting opposition politicians can lead to bad habitsTime to name names, Ms Clinton
• Topics / Freedom of expression

Setbacks to media freedom in run-up to elections 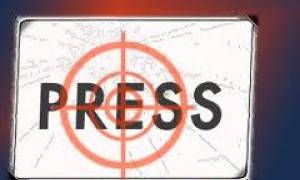 With just over than three months to go to parliamentary elections on 28 October, Reporters Without Borders is alarmed by the steady decline in media freedom in Ukraine and deplores a series of incidents during the past six weeks.

“We are disturbed by the developments affecting freedom of information that we have been seeing in the run-up to the elections, ” Reporters Without Borders said. “June and July have been particularly alarming. We are worried about the environment for journalists and about the future of pluralism in broadcasting. Independent media are subject to all kinds of harassment, including constant intimidation, raids and prosecutions.

“This situation is unacceptable in a country that is supposed to take over the rotating presidency of the Organization for Security and Cooperation in Europe in 2013. We call on the authorities to do everything possible to guarantee and protect media freedom in the final months before these crucial elections.”

The privately-owned television station TVi interrupted its regular programming on 12 July to provide live coverage of a tax police raid on the station, showing inspectors in the process of examining all of the station’s financial documents.

The head of the station,  Mykola Knyazhitsky, is now being investigated under article 212 of the criminal code for allegedly evading more than 3 million hryvnias (305, 000 euros) in Value Added Tax. He denies the charge and insists that he always submitted tax statements and paid his taxes to the Kiev tax department.

TVi has been having difficulties for years because of its status as an independent broadcast media. A court withdrew its over-the-air broadcast frequency in 2010 as a result of an action brought by Inter Media Group, a TV broadcasting company.

Owned by Konstantin Kagalovsky, a former shareholder in the oil company Yukos,  TVi is the only national TV station that competes with the pro-government station Pershyi Natsionalnyi. It is now facing the possibility of being forced to close.

Ksenia Vasylenko, the editor-in-chief of the LB.ua news website and two of her colleagues,  Oleg Bazar and Maxim Levin, learned on 18 June that a criminal complaint had been brought against them by the parliamentarian Volodymyr Landryk.

He is accusing them of invading his privacy by taking a photo of him in parliament in November 2011 while writing an SMS message about his son, who was deeply embroiled in a scandal. Reporting that Landyk had persuaded Luhansk TV journalists and PR representatives to help repair his son’s image, the site posted the photo with the caption: “Lawmaker rescues son with help of spin doctors and ‘right’ comments on websites.”

The three journalists are facing the possibility of up to seven years in prison on a charge of “violating the confidentiality of correspondence” under article 163 of the criminal code. Their case is to be raised by journalists’ organizations, lawyers and international organizations at a special meeting of the inter-ministerial group on freedom of expression in Ukraine on 30 July, which the president is to attend.

As well as these two cases of fiscal and judicial pressure, there have been other signs of a hardening in the attitude of the authorities towards the media. Both interior minister Anatoliy Zakharshenko and deputy head of Kyiv City State Administration Oleksander Mazurhshak have publicly indicated their intention of tightening the vice on media freedom.

On 28 June, the interior minister announced that he would implement an alarming initiative under which the authorities would be able to “regulate” the public’s access to the Internet, until now the only medium of communication in Ukraine not subject to a great deal of surveillance.

In a threatening statement the same day, the deputy head of KCSA said he would sue any media that published or broadcast biased reports about the organization of the 2012 European Football Championship in Kiev.

After a series of incidents,  Alla Petrova resigned on 13 July from her job as a journalist withCrimea, a pro-government radio station that focuses on the southern province of the same name. The last straw was the editorial board’s decision to cancel her Ukrainian-language programme “Dva Kolyory” (Two Colours) on the evening of 13 July.

In the programme, she had planned to comment on a demonstration by about 100 people on 7 July in protest against the passage of law under which Russian becames Ukraine’s second official language.

Petrova said the grounds given for the programme’s cancellation were “non-approval of the script” and “poor quality of recordings.” She added that she regarded it as an act of censorship by the station’s management, which had accused her or promoting “aggressiveness” and “wanting to take political sides.”

A similar incident occurred at the radio station at the start of June, when the management cancelled “Haberler, ” a programme prepared by the station’s Crimea-based staff, on the grounds that the news reported during the programme did not include the president’s activities.

Station director Stephan Hulevatyi said that he had received Petrova’s resignation and that he would examine it.

Other journalists were prevented from working or were exposed to hostile behaviour in the course of June and July. Some had equipment confiscated or broken, others were aggressed while covering events, and others were the victims of acts of intimidation.

The journalist and blogger Pavlo Kolesnyk was aggressed while conducting interviews in the eastern city of Donetsk on 9 June. He was accosted by an unidentified man who, after a brief verbal altercation, tried to seize his camera. Kolesnyk had been interviewing activists who are campaigning to preserve a square that is threatened by the construction of shrine. He reported the attack to the police.

A cameraman with the Crimean regional TV station ATR was filming a street demonstration on 13 June when he was attacked by an unidentified person who hit his camera several times. A policeman intervened to protect him. He had been filming a demonstration in support of the “March of Millions” against electoral fraud in Russia.

A week later, members of the Donetsk tax police physically attacked the journalist Maxim Kasyanov when he filmed the car of the head of the Donetsk regional government, Andryi Shyshtskyy.

Finally, journalists with the weekly Perets Volynskiy and a group of activists were attacked by six unidentified men on 14 July while the activists were distributing leaflets criticizing a local political leader who will be a parliamentary candidate in the next elections. The assailants repeatedly tried to smash their camera and their audio recorders.

Journalists who have taken too much interest in a series of bombings in Dnepropetrovsk on 27 April, in which dozens were injured, have been directly harassed and persecuted.

Olena Prytula, the editor of the online newspaper Ukrayinska Pravda, regarded as one of Ukraine’s most popular and outspoken news outlets, complained on 22 June that reporters who tried to contact the relatives of the “terrorists” arrested for the Dnepropetrovsk bombings had been harassed by members of the SBU, the Ukrainian security service.

One journalist in particular has apparently been singled out. The SBU is reportedly still following him and tapping his phone because he knows three of the four main suspects held by the SBU. He contacted their relatives after their arrest on 1 June, promising to publicize the case. He is not being named as a safety precaution.

This reporter has gone to Dnepropetrovsk several times to pursue the story. He was briefly detained on 20 June by two SBU agents, who interrogated him at a police station and searched his personal effects. They also showed him videos and documents that supposedly attested to the guilt of the detainees. When he met with friends near the railway station in Dnepropetrovsk the next day, they were approached by a man who repeatedly photographed them.

Despite all these incidents, Reporters Without Borders hails the progress in the investigation into investigative journalist Vasyl Klymentyev’s disappearance in the northeastern Kharkiv region in August 2010. The police named Andryi Kozar, a former member of the Anti-Organized Crime Department, as the chief suspect on 21 June and an international warrant has been issued for his arrest.

Reportedly the last person to see Klymentyev alive, Kozar is accused under sections 8 and 12 of the criminal code, covering “murder of an individual in connection with his official duties” and “murder carried out under a prior arrangement with a group of persons, ” and under article 115-2 covering “premeditated murder.”

Ukraine is ranked 116th out of 179 countries in the 2011-2012 Reporters Without Borders press freedom index.