Then and Now: 70 political prisoners in today’s Russia 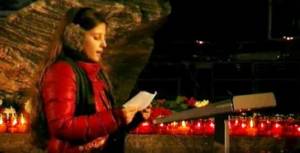 Remembering the names of Victims of Repression in Moscow, 29 October 2013 (photo from www.HRO.org

Back in 1974, Soviet political prisoners declared 30 October to be Day of Solidarity with Political Prisoners in the Soviet Union.  Since 1991 30 October is marked as Day of Remembrance of the Victims of Political Repression.  In Moscow, St Petersburg, Ryazan and other cities people gather to read out the names of victims of repression.

This year Memorial also marked this day by making public a list of 70 contemporary political prisoners in Russia.  At a press conference they announced new criteria drawn up for recognizing people as political prisoners. The criteria were prepared in cooperation with human rights activists from other Eastern European countries on the basis of recommendations from Amnesty International, PACE and other international organizations.

The list of 70 political prisoners, in accordance with the new criteria, includes the following:

Foreign nationals – Greenpeace activists and members of the Arctic Sunrise crew detained by Russian border guards while protesting against oil drilling in the Arctic; The Bolotnaya Square prisoners:  people in custody on charges linked with the May 6, 2012 protest against Putin’s third term inauguration;

Others convicted on other charges.

The list, it was stressed, may not be comprehensive.  The full list in Russian can be downloaded by pressing the hyperlink here: списоксемидесяти современных российских политических заключенных,