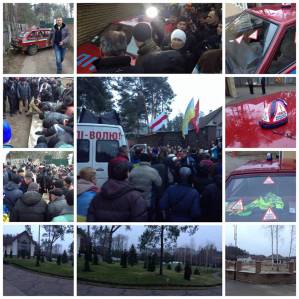 Participants in a peaceful protest on Dec 26 outside the opulent residence of the Interior Minister, Vitaly Zakharchenko have been informed that criminal proceedings have been initiated over graffiti on the minister’s fence.

Those with nothing better to do in the ministry have decided that the public danger involved in such graffiti constitutes a criminal offence.  Dmytro Yovdiy, AutomMaidan lawyer calls this totally absurd and says that the actions could at very most be classified as an administrative misdemeanour.

EuroMaidan SOS calls this the latest method at putting pressure on AutoMaidan car rally activists in order to restrict freedom of peaceful assembly.

On Dec 24, just hours before the savage attack on her, investigative journalist and civic activist Tetyana Chornovol posted highly telling photos and information about Zakharchenko’s residence under the title: “This is where a butcher [literally: executioner] lives”.

It was here that protesters came demanding that the minister go over the attack and likely attempted murder of this fearless journalist, a number of other violent attacks on EuroMaidan activists, and of course the violent dispersing of peaceful protesters on Nov 30.