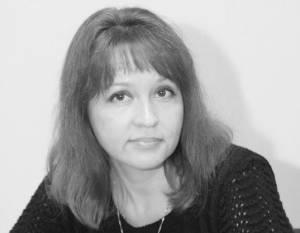 Update:  QHA reports that Tatyana Guchakova returned home on Thursday evening, and thanked people for their support.  "How was it?  As usual, after all a fair number of people by now have such experience!"

Tatyana Guchakova, former deputy chief editor of Black Sea News has been taken away by FSB officers in Yalta after a 10-hour search of her home.  Andriy Klymenko, BSN Chief Editor reports that the FSB turned up just before 8 a.m. on Thursday and left after 5 o’clock, taking the journalist with them, as well as all computer technology.

The Black Sea News offices, together with Klymenko, have been based in Kyiv since shortly after Russia’s invasion and annexation of Crimea.  Guchakova has not worked for the publication since then, however remains a member of the Ukrainian National Union of Journalists.

Telekritika adds that Guchakova was a member of the international initiative Crimean Political Dialogue which existed from 2010-2014, but ended after annexation.

Why Tatyana Guchakova should have been detained is unclear unless the real target is Black Sea News and the related Maidan of Foreign Affairs, which have played an important role in highlighting rights violations in Crimea.  Klymenko is the author of a major report published recently – Human Rights Abuses in Russian-occupied Crimea.

As of late Thursday evening there is nothing to suggest that the journalist has been released, with this possibly indicating an escalation in repressive measures against Crimean journalists, especially those currently or formerly linked with independent media which dare to write honestly about what is happening in Crimea.

As reported, on April 8,  Anna Shaidurova, a former editor and journalist for the Centre for Investigative Journalism [CIJ] was interrogated for around 3 hours by FSB officers.  She was made to sign an undertaking not to divulge any details, and told journalists only that they had talked “about editorial work and the duties of the Centre’s staff.”

The Centre for Investigative Journalism is also now based in Kyiv.  Its Chief Editor Valentina Samar confirmed that Shaidurova has ‘witness’ status in ominous criminal proceedings brought against journalist Anna Andriyevska over an article published by the Centre.

On March 13, the FSB appeared at the home of the parents of CIJ journalist Natalya Kokorina.  After a 4-hour search, Kokorina was taken to the FSB office and questioned for over 6 hours.  Her computer was also taken away.

That day a search was carried out of the home of the parents of Anna Andrievska, the author of the article which attracted the attention of Russia’s security service, and prompted a long-feared first criminal case after Russia introduced a new article to the Criminal Code shortly after annexing Crimea.  Article 280.1 criminalizes ‘public calls to separatism’ and, as feared, is likely to be used against Crimeans expressing their wish for Crimea to be back under Ukrainian rule.

Anna Andriyevska, like Klymenko and Samar, was forced from her native Crimea after annexation.  She tried to work as a journalist for 3 months first but understood that this was impossible under Russian occupation.

The measures now being taken against her former colleagues unfortunately show that she was right.

More about Andriyevska’s experiences, and the likely passages from the article in question can be found at: Crimean journalist interrogated in ominous ‘call to separatism’ prosecution