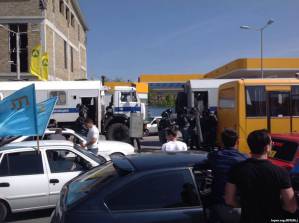 The occupation regime in Crimea is actively detaining both journalists and Crimean Tatars taking part in traditional remembrance actions marking the 71st anniversary of the Deportation of the Crimean Tatar people.

At the Zapadnaya bus station in Simferopol, Crimean Tatars driving in cars with Crimean Tatar flags were stopped by a large contingent of OMON riot police in full combat gear and with shields.  Radio Svoboda’s Crimean Service reports that around 60 people were taken away in police vans, to draw up protocols.

What precisely they will be charged with is unclear since the Crimean Tatars were simply taking part in a traditional car rally through Simferopol and to Bakhchysarai in memory of the victims of the Deportation.  However the detentions were clearly prepared in advance, with four police vans waiting, and under Russian occupation the lack of any offence has not proved a problem.

The Centre for Journalist Investigations reports that two journalists from the Russian organization For Human Rights have also been detained.  They were simply speaking with Crimean Tatar at the station.

Unfortunately, this report is likely to be updated with further repressive measures.  The authorities have effectively banned all traditional remembrance gatherings on this day in which Crimean Tatars honour the memory of all victims of the 1944 Deportation.

The occupation authorities also refused permission to the Crimean Tatar youth organization that traditionally holds an action entitled « Light a Candle in your Heart », instead organizing an ersatz event with its ‘own’ organization.   It is a telling detail that a number of journalists were stopped from attending that official event.

In response, dozens of young Crimean Tatars came out in Simferopol on Sunday evening and let off Chinese lanterns in memory.

The traditional “Light a Candle” was held throughout mainland Ukraine, with the main remembrance events on Sunday evening and Monday afternoon taking place in Kyiv’s main square.

The Mejlis, or Crimean Tatar representative assembly, has called the occupation regime’s aim in crushing Crimean Tatar historical memory an attempt to justify the crimes of Stalinism and the Soviet regime.

It points to the open encouragement by the authorities of actions aimed at praising Joseph Stalin.  (more details here: Russian-Occupied Crimea: Memorial Plaque and Glorification of Stalin).

Efforts to whitewash Stalin’s memory under the current regime in Russia, and the results of this in Russian-occupied Crimea, are a profound affront to most of us whose families directly suffered under the bloody dictator.  They are especially offensive to Crimean Tatars because of the terrible scar of the 1944 Deportation and decades of exile.

This is the second year that the Russian occupation regime has stopped Crimean Tatars gathering to honour the memory of their parents, grandparents, an entire people banished from their homeland.

As the organizers of the remembrance gathering on Monday evening in Kyiv write, on May 18 we are all Crimean Tatars.