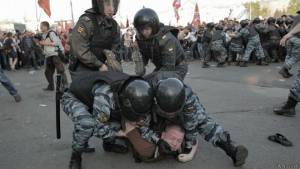 The bill, passed in its third and final reading on May 19, allows the authorities to ban any foreign or international NGO deemed  to threaten ‘state security’, ‘national defence capacity’, “public order and the health of the population” or ‘constitutional order’.  The law’s authors claim that the present extremely broad scope provided by legislation against terrorism and ‘extremism’, as well as that on labelling NGOs ‘foreign agents’ does not go far enough.

If the Council of the Federation (Russia’s upper house) and President Vladimir Putin support the bill, and there is every reason to believe they will, the future for NGOs and generally for civil society in Russia is grim.

The law allows the Prosecutor General, in agreement with the Interior Ministry, to issue decisions regarding the undesirability of a specific organization, This will then be added to a list and published by the Justice Ministry.

NGOs labelled as undesirable will not be able to transfer money to Russia, open representative offices in Russia or carry out programmes. There is also a ban on circulating of information from such organizations.

There are steep fines for individuals, officials or legal entities taking part in the activities of an ‘undesirable NGO’, whatever this means, with a repeat ‘offence’ of the relevant article of the Code of Administrative Offences within a year leading to criminal liability. Those running the NGO immediately face criminal liability, under Article 284.1 of the Criminal Code.  Since the maximum prison sentence envisaged by this article is over 5 years, the offence is classified as grave.

An NGO which is deemed ‘undesirable’ will have its accounts frozen and all subsidiaries will be closed.   Any foreign nationals deemed to be taking part in the activities of such an NGO will be prohibited from entering Russia.

It was clear that the bill would go through after its second reading, and both Amnesty International and Human Rights Watch issued statements of concern.

AI’s John Dalhuisen called the bill “the latest chapter in an unprecedented crackdown against non-governmental organizations which is effectively criminalizing lawful activity and squeezing the life out of free speech and association.”

Hugh Williamson from Human Rights Watch stressed that although it is foreign organizations which will be deemed ‘undesirable’, it is Russian activists who will suffer.

The terminology is very vague, however experience with the ‘Register of foreign agents’ in force since 2012 leaves little scope for illusion as to what kind of organizations will be deemed ‘undesirable’.

Svetlana Gannushkina, Director of Civic Assistance, is clear that civil society will be prevented from working with Amnesty International, Human Rights Watch, Medicins sans Frontiers.  It is human rights organizations as main critics of the regime who will be the first targeted in what not only she understands to be the latest move in erecting an iron curtain between the world and Russia.