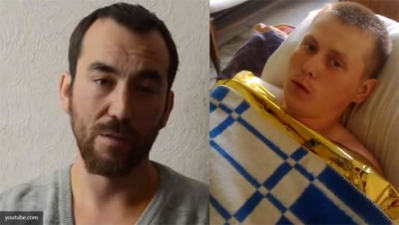 Sergei Krivenko from the Russian Human Rights Council has just made public a report on his visit to the two Russian spetsnaz officers captured in Ukraine on May 16.  The two men – sergeant Alexander Alexandrov and captain Yefgeny Yerofeyev deny Russia’s claim that they were no longer in military service and ask for help in contacting their families as all phone numbers that they have are either blocked or don’t answer.

Krivenko explains that he had the opportunity on June 1 to visit the men while at a conference in Kyiv.  The two soldiers are both receiving treatment for their injuries in the central Defence Ministry hospital in Kyiv, and Alexandrov has undergone a unique operation.  The doctors say that they have managed to avoid amputating his leg.

Krivenko notes that the conditions the men are held in are good, with both men having separate rooms, which are clean and bright.  Neither men had any complaints about the conditions and they categorically denied any form of torture or physical pressure on them since their arrest, as claimed by Russian television.  Neither seemed depressed, and they “held themselves with dignity”.

Their main worry, as mentioned, is that they are being prevented from contacting their families, and have asked Krivenko and the Human Rights Council to help.

Judging by earlier media reports, there are real grounds for concern.  Moscow has effectively abandoned the men, claiming that they were not active spetsnaz officers at the time of their capture.  This clashes totally with the men’s testimony given freely to various media sources and now to a member of Vladimir Putin’s own Human Rights Council.

There are also videos available allegedly taken from the two captured men’s mobile telephones which show the full make-up of the intelligence-sabotage unit of Russia’s Military Intelligence [GRU] that not only Ukraine, but the men themselves say they were part of.   The videos are available at the links below.

Even if they were mercenaries, as Russia has claimed, there would be no need to prevent them speaking to their families.

At the end of May, Pavel Kanygin from Russia’s Novaya Gazeta visited the two men for the second time.  He had already spoken with both men who told him in detail about the reconnaissance work they were engaged in as Russian servicemen.  Kanygin writes that he had not planned to take any photos, but the men asked him to, explaining that it was only through such visits that they could make any contact with their families.  They tried phoning in his presence and found yet again that either nobody answered, or they were told that the number was “not available”.  That in fact determined the poignant title of Kanygin’s report: “It’s never happened to me that I rang my mother and she didn’t take the call”.   These were Alexandrov’s words who added that even before he married his wife, he could ring her even at 2 a.m. and she’d always answer.

Now there is silence.

Or worse, since there was an interview given on Rossiya 24 where his wife told the interviewer that Alexandrov had left the military in December 2014.  He admits that this hit him very hard, though he defends his wife, saying that she’s not responsible.

This is not the first such occasion where wives have been put under pressure to give testimony at odds with the facts.  As reported here, after Lev Shlosberg first revealed information about the deaths of Pskov paratroopers in August 2014, the wife – or somebody pretending to be the wife – of Leonid Kichatkin, one of the men killed, claimed on the phone that her husband was not only alive, but right next to her and handed over the phone.  It is not clear who the journalists spoke with but Kichatkin’s grave can be found in the Pskov oblast.

“I think it’s in our joint power to put an end to all of this. So that our lads don’t go [to war] anymore, nor Ukrainian lads.  Here after all they’re all somebody’s brother, friend, son or father…”

Here we return to Krivenko’s comments.  He says that as a member of the Russian Human Rights Council he will be monitoring the defence of the two men.  He explains that the men have been charged with terrorism and provided with legal aid from Russian-speaking lawyers whom they say they are happy with.  The lawyers say that the charges under terrorism can carry a life sentence, but that they will be trying to get the charges changed to espionage, carrying sentences of 10 to 15 years.  This, however, is only if they can prove that Alexandrov and Yerofeyev were current members of the Russian army.

“During our conversation the detained men themselves confirmed that up till their capture they were Russian servicemen, that nobody had shown them any order dismissing them and their contract period had not ended. “

The Russian authorities have yet to officially answer the lawyers’ request for confirmation of their identity and status.  Krivenko points out that no documents were found when the men were detained and asserts that their names and who they are is known only from their own words.   This may formally be the case, yet Russia has confirmed that the men are Russian and that they were spetsnaz officers.  It denies only what it has denied with ever diminishing credibility since August last year when the first reports came of Russian soldiers being killed fighting Russia’s undeclared war in Ukraine.

The denial in this case has demonstrated to two Russian soldiers and should show others that the Kremlin is not only willing to send men to fight, kill and often die for its dubious ends, but will also leave the men to their fate and even put pressure on their families to abandon them.