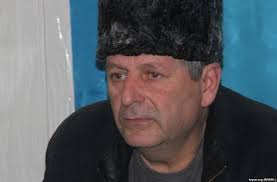 On Aug 10 Crimea’s Supreme Court partially allowed the appeal lodged against the latest term of detention imposed on the Deputy Head of the Mejlis, or representative assembly of the Crimean Tatar People, Akhtem Chiygoz.  The defence had asked for the ruling extending Chiygoz’s detention until Nov 19 to be revoked, however the court agreed only to reduce it to Aug 19.  It will become clear shortly whether this is a mere formality, and his detention will again be extended.  It is, however, the first time that a court in Russian-occupied Crimea has not totally acquiesced to the demands of the prosecutor’s office.

Akhtem Chiygoz was first arrested on Jan 29, 2015.  In breach of fundamental principles of law and of Russia’s own legislation, he is charged with involvement in a demonstration which took place on Feb 26, 2014, i.e. the day before Russian soldiers seized control.  The case is thus by definition absurd, with Russian-occupied Crimea having no jurisdiction to prosecute anybody.  There are also no grounds for specific charges against any individual.

It is now only Crimean Tatars who are facing prosecution, as well as constant harassment, searches, etc.

Natalya Poklonskaya, installed as Crimean prosecutor after annexation, recently claimed that several people facing charges had ‘confessed’ and made a deal with the prosecutor’s office.  She was clearly asserting that they had agreed to testify against Chiygoz.  She refused to give any names and it is possible that this is simply an attempt to stir up distrust within the Crimean Tatar community.

The methods she spoke of are ominously lawless.  She asserted, for example, that those who had agreed to ‘cooperate’ “will assist not only in solving the crime, but in presenting information about other crimes, new circumstances or episodes.”

Bloody tyrant Joseph Stalin was first credited with the same attitude: “Give me the man, the crime will be found” [literally: article of the criminal code].