Nadiya Savchenko: “You can call me the artillery spotter” 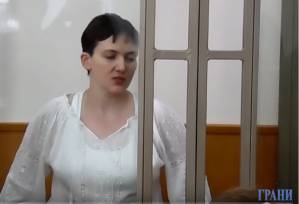 The ‘trial’ on Sept 29 of former Ukrainian military pilot Nadiya Savchenko, held in Russian detention since late June 2014, after being captured by Kremlin-backed militants in the Luhansk oblast.  The hearing following another Global #FreeSavchenko Day with a multitude of calls like that from , calling Savchenko’s detention “illegal and immoral” and demanding that Russia release her immediately.

As reported, the court hearings are taking place in the Russian city of Donetsk which has no relation to any of the events, but has the advantage for the Kremlin of being far from Moscow.  Savchenko is spending roughly three hours a day in transit, since the nearest detention prison [SIZO] is at Novocherkassk, and journalists are not allowed into the courtroom.  Many have complained of the poor sound quality of the video they are watching in a hall nearby.

The case is being heard by a panel of three judges of the court, headed by Leonid Stepanenko who has thus far only rejected one application from the prosecutor (to remove all the defence lawyers) and all those from the defence.

Rejected (as not envisaged by the Criminal Procedure Code)

Savchenko was succinct in her assessment: “The prosecution is scared that their dishonest case will fall apart if it shows that I’m not lying.  And if you put all the witnesses as well under a lie detector, there will be nothing left (of the case)”

The defence demanded to be able to question the author of a supposed expert assessment stating categorically that Savchenko was speaking the truth in a video recording made for propaganda by the militants in June 2014.

The defence asked to use a projector with a laser arrow during the interrogation since they would need to show where Savchenko was, and when.  They stressed that they planned to use the maps from the file material.

The prosecution objected, “claiming that this infringed the prosecution’s right to present proof because it was proposed to use maps from the file material which had not yet been examined”. The prosecutor asserted that the material is presented by the prosecution, not the defence.

The judge accepted the prosecution’s objections, stating only that they could ‘later return to this question”.

The defence asked for maps from Google to be used.

The prosecution objected and the judge again accepted the objections, stating that the prosecution has “priority” at present, and that “the court has no grounds for infringing the given procedure”.

The question of location is critical as Nadiya Savchenko was captured by the militants on the morning of the day that two Russian journalists died in mortar fire.  She is accused of having directed the fire from a television tower 3 and a half kilometres from the place where they died.

The prosecution claims that she used professional binoculars and a radio device to  see the men from such a distance and then inform Ukrainian soldiers, but has not presented any of this crucial evidence.

This is in contrast to the defence who can demonstrate that Savchenko has an alibi.

Time and place is thus critical, which may be why the prosecution objected – and the judge went along with him.

Faced with “such a united front”, defence lawyer Ilya Novikov said, “we have no choice but to turn to questioning our client”.

Savchenko spoke herself in Russian, having agreed that she could ask the interpreter for prompts if she didn’t know a word.

“My attitude to people in Donbas is fine: there is no bad nation, everywhere there are individual people. I have no hatred. People made their choice depending on their level of daring and understanding.”

“It was hard for soldiers to not be able to defend their country.”  When the anti-terrorist operation [as Ukraine calls the military action in Donbas] began, she decided to take part.  She had to take leave and went “there where my people were”.

On June 17, she had found wounded soldiers and rang her sister who called for assistance.  The Aidar Battalion soldiers who came for her and the wounded men were ambushed.  She was taken prisoner – according to her own testimony which is backed by telephone tower records – at 10.30, an hour or more before the two journalists were killed.

Asked why some of her testimony does not match what she told the militants at an interrogation on June 25, she was quite unequivocal:

“When you’re taken prisoner by the enemy, you won’t tell him the truth.  I couldn’t tell them about the location of Ukrainian soldiers”.

, for example, that on the second day in captivity, a person turned up calling himself the commander of a Chechen unit. He said that they were looking for an artillery corrector, and asked if she knew this person (showing a name on a piece of paper).  She said that she didn’t “and they could regard her as the person”.

“Because if the enemy is looking for a soldier, it means he hasn’t yet found him and that person can still carry out his task.  If I was already caught, what was the difference? Better to take it upon myself so that the other person has less obstructions”.

Did she imagine that this could end in a criminal prosecution?

“Well, a criminal prosecution, no, of course not?  How could I have known that Russia had got involved?  I understood that that conversation could lead to my death, but that’s what I’m a soldier for, an officer”.

On Tuesday Open Russia published on June 17.  The video states that it was filmed by a “Russian volunteer Yegor Russky”.

She describes how she was taken in different cars, with her eyes bound across the border.  Even the first two men with machine guns whom she was handed to did not understand a word of Ukrainian.  They took her through a forest area to a car with a driver and two armed men who took her around 3 and a half hours.  She was finally placed in another car, and allowed to see.  She saw Russian number plates and asked if she’d been taken to Russia.  Yes, they said, “we’re carrying a gift to the Ataman”.

She was taken to Voronezh, to the Investigative Committee and then to the Euro Hotel.

All of this clashes completely with the tale presented by the investigators, according to which Savchenko ‘was released’ by the militants and then ‘illegally crossed the border into Russia’, where she effectively awaited arrest.

Throughout all of the questioning, it seems likely that there was no lawyer present, or one whose actions were totally determined by the investigators.

On June 30 she was informed that she was a suspect, and then a court remanded her in custody, the judge “averting his eyes” as he did so.

Her questioning took around three hours, then there was questioning of so-called ‘victims’ – Ukrainian refugees from the town of Metallist near Luhansk who are now in the Voronezh oblast.  They spoke by video from Voronezh, accentuating the absurdity of holding the trial in Russian Donetsk.