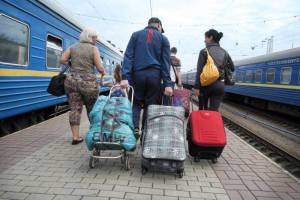 In yet another blow to the huge number of Ukrainians forced to flee their homes in Crimea and Donbas, President Petro Poroshenko has vetoed a law lobbied by groups working with displaced people [IDP], human rights NGOs and the office of the Council of Europe’s Secretary General.  The reason given is that the law makes it impossible to monitor whether displaced people are really living at the place where they’re registered.

The law vetoed was passed by parliament on Nov 3.  It envisaged the following amendments to the earlier law on displaced people:

-        indefinite papers for IDP (replacing papers that needed to be extended every 6 months);

-        the need to get a stamp from the Migration Service on the back of the document was waived;

-        checks on where displaced people are living were abolished;

The amendments were drawn up to simplify a procedure which had created unnecessary hardship for people already displaced from their homes and facing enough problems.

It took parliament around 9 months to finally pass a bill setting out procedure for registering IDP and regulating issues regarding employment and social payments.  A draft law had originally been adopted on June 19, 2014.  It was not, however, the one that had been discussed with civic groups, but a new document only tabled on the day of voting and basically failed to address any of the very real problems which confront people forced to leave their homes.  That bill was vetoed a month later by Poroshenko, however a new bill was adopted at the absolute final moment by the old parliament, and was then not signed into force by the President until Nov 20, 2014.   for a further month.

On March 4, 2015, a Cabinet of Ministers resolution required people who have moved from areas under occupation to constantly confirm their actual place of residence.  Without the relevant stamp from the Migration Service, the IDP document, entitling them to social payments, material assistance, etc., becomes invalid.   This, human rights activists say, is reinstating the old system of propiska, or registration.  Outrage was expressed by human rights groups working with displaced people, many of whom saw the measure as a way of reducing the number of people entitled to government assistance.

While broadly welcoming adoption of the original bill, civic organizations stressed the need for amendments, and a draft law was drawn up by  a group of MPs in cooperation with human rights organizations.  Draft Law No. 2166 was passed as a basis on May 19, yet still took until the beginning of November to be adopted.

And the end of November to be vetoed, with the President having submitted proposed amendments on Nov 25.

According to civic activist Oleksandra Dvoretska, the bill now vetoed also deals with the issue of registration of children who have been moved from occupied territory without their parents.

A crucial amendment concerned the IDP papers which could now also be received by foreign nationals and stateless persons, with that document obtainable from the Department for Social Protection, and not needing a Migration Service stamp and twice-yearly extension.

The veto was unexpected.  Poroshenko points to the lack of regulation and a mechanism for checking prolonged absence of displaced people from their place of residence and information about their movements within Ukraine.

The proposed amendment envisages a mechanism for checking where IDP are and how long they have been away.

The MPs who drew up the bill have objected and call the President’s criticism unfounded.  Georgy Logvinsky promises, however, that the draft law will be reviewed in the near future, with the proposed amendments taken into consideration.  He believes the changes simplifying procedure can be retained.

At a press conference over the development, rights activists effectively called on the President to join the modern world, and understand that instead of forcing people to run around getting stamps and signatures, a single database needs to be developed. The activists are planning to post an electronic petition on the President’s website demonstrating the urgent need displaced people have for the amendments and calling on him to sign draft bill No. 2166.

In August the number of displaced people in Ukraine was estimated at 1.4 million, the largest number in Europe since the end of World War II.