Ukraine’s Government backs down on appointment of homophobic Family Ombudsman 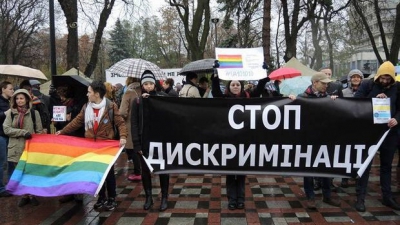 UPDATE:  On March 8, a representative of the Government’s Press Service announced that an open competition is to be held for the post of Family Ombudsperson, that Adrian Bukovynsky has not taken up the post and that “a special check” with regard to him is being carried out.  The wording appears to suggest that the news was not inaccurate, but that the public reaction has alerted the Cabinet of Ministers to Bukovynsky’s views and that they have, hopefully, backtracked.

Ukraine’s Cabinet of Ministers has chosen as Ombudsman on Family Matters Adrian Bukovynsky, known for his highly contentious views on the subject of LGBT rights, support for a Russian-style law banning ‘propaganda of homosexuality’ and some seriously offensive pronouncements.

The newly-appointed Family Ombudsman was one of the participants in a press conference on Feb 28, 2013 defending ‘traditional family values’ against the “incredible pressure from the EU regarding protect of the rights of sexual minorities and propaganda of homosexuality in Ukraine”.

This allegedly incredible pressure was essentially the EU’s demand for the new Labour Code to include a clause prohibiting (among other forms) discrimination of sexual minorities.

The participants in the 2013 press conference denied that they were homophobic or that there was discrimination of the rights of gays and lesbians in Ukraine.  They called on the international community to not confuse the concepts of discrimination of propaganda and what they – and Russian legislation – called ‘propaganda of homosexuality’.

Bukovynsky spoke as President of the ‘Family’ Ukrainian Charitable Fund.  He asserted that the public were being forced to accept “anti-norms”.  “It’s expected that the public will change their views on this subject. At present there is discussion regarding the rights of gays and lesbians.  However we need to talk also about other players of the gender spectre – paedophiles, necrophiles, zoophiles, etc. These are all links on one chain.  We need to talk about all its parts. They also, after all, are laying claim to differentness.  Then you get a full picture of the social milieu which needs to be legalized, as is being successfully, step by step, carried out in European Union countries”, Bukovynsky asserted back in Feb 2013.  He alleged that there would be a society of single-sex couples.  “What is its future? The answer is obvious! Gay culture leads to the destruction of the world, and therefore we uphold and reflect the views of the overwhelming majority of our compatriots”

Back in February 2013, the participants announced that for them the main task was to preserve the traditional family institution in Ukraine and to adopt a law on banning propaganda of homosexuality.

The bill in question would have slammed all doors to EU Association shut, while achieving alarming unanimity with Russia.  ‘Propaganda of homosexuality’ was deemed to be any ‘positive depiction of gay people, gay pride marches, etc.  A film like Brokeback Mountain would have impossible to show, and people would have thought long and hard before mentioning the gay partners of numerous famous people.   In June 2013, the Parliamentary Assembly of the Council of Europe called on both Russia and Ukraine to reject such laws.

Russia paid no heed, but in Ukraine the bill was never passed.  This was probably because of the ongoing negotiations with the EU, and certainly not due to widespread rejection of homophobic intolerance.

The struggle to even get the prohibition of discrimination of sexual minorities in the workplace passed has been difficult.  Back in September 2013, members of the LGBT community addressed an open letter to the EU asking it to not back down after Valeria Lutkovska, Human Rights Ombudsperson and several MPs said that they would be asking the European Commission to waive the requirement on amendments to anti-discrimination legislation, claiming that they were not appropriate for Ukrainian society. At the time Amnesty International also expressed outrage at the suggestion that the requirement be waived.

The amendment to the Labour Code which caused such furore was embarrassingly innocuous.  It prohibits discrimination on racial, political and religious grounds, as well as on the basis of gender, sexual orientation, family or financial position, participation in strikes, or because of suspected or confirmed AIDS.  Despite being a requirement for EU visa liberalization, the amendment was rejected by a post-Maidan parliament in Autumn 2015 three times before finally receiving a small majority in November last year.

The Cabinet of Ministers’ Decision appointing Adrian Bukovynsky Family Ombudsman was adopted on Feb 24, 2016, almost exactly three years after the above-cited press conference.  The Ombudsman’s role involves ensuring that Ukraine complies with its international obligations regarding the rights and legitimate interests of members of families.

That’s, presumably, if the families meet the Ombudsman’s requirements.