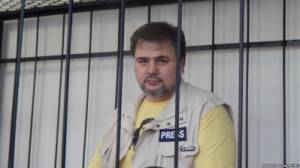 A Ukrainian human rights NGO has added its voice to calls for the release of Ruslan Kotsaba, who has been in detention for 14 months on extremely questionable grounds.

The Centre for Civil Liberties stresses that however provocative and contentious the  video appeal which prompted the charges may be, Kotsaba’s actions do not contain elements of the crimes he is charged with.

“Even under conditions of armed conflict which the Russian Federation began and has been conducting since the occupation of Crimea and hybrid war in Donbas, all restrictions of freedom of expression must be lawful and proportionate.

Otherwise we ourselves will turn into Russia where people can end up behind bars for posts criticizing the actions of the authorities in social networks”.

Kotsaba was arrested on Feb 7, 2015 and immediately remanded in custody.  He remains in custody, not for any legitimate reason but because of the severity of the – as yet unproven – charges.  His lawyer, Tetyana Montyan, announced in November 2015 that she was preparing an application to the European Court of Human Rights since she believed the authorities were deliberately dragging out the trial with hearings up to a month apart.

There are serious grounds for believing that the Court in Strasbourg will agree that Kotsaba’s rights are being violated.  So too did Amnesty International which in its 2015/16 annual report declared Kotsaba a prisoner of conscience – for the first time in 5 years.

Ukraine’s Security Service [SBU] has charged Kotsaba under Article 111 § 1 of Ukraine’s Criminal Code (state treason) and Article 114-1 § 1.  The latter is over espionage, although in this case, he is accused of obstructing the lawful activities of the Armed Forces and other military formations.

Aside from a video address to President Petro Poroshenko from Jan 17, 2015, the charges are effectively based on his willingness to cooperate with Russian pro-Kremlin media and on his views.  Whatever we may think of them, the criminal offence of state treason carries a sentence of 12-15 years imprisonment.

On the video he publicly called on “all adequate people” to refuse mobilization, asserting that it had been  declared in breach of Ukraine’s legislation, since Ukraine has not declared martial law.  He asserted that he “would rather serve a sentence in prison than go to a civil war, to kill or help kill my compatriots who live in the East.  Even if they think differently or believe that the Kyiv government does not deserve their subordination.”

In fact, had the SBU not made Kotsaba so famous, it is unlikely that the video would have been watched very much at all.

According to civic activist Volodymyr Shevchenko who has been attending the court hearings, the SBU have not come up with a single witness who attempted to avoid mobilization because of Kotsaba’s video, yet the prosecution is claiming that it falls under Article 14 as being ‘subversive activities obstructing the armed forces”.  There is also nobody who was at the front with him to confirm or refute his claim to have not seen Russian soldiers.

Very many of us are revolted by Kotsaba’s readiness to collaborate, whether for remuneration or for free, with Russia’s propaganda channels.  There is, however, no law prohibiting this.  Nor should there be in a democratic country.

Kotsaba must indeed be freed.