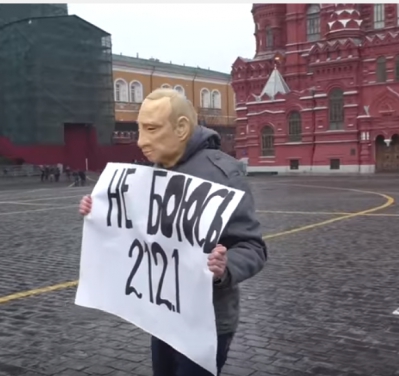 Roman Roslovtsev, the courageous Moscow activist challenging Russia’s draconian anti-protest legislation has crossed into Ukraine and applied for asylum.  The move was not spontaneous and his choice of country very deliberate.  He explained to Radio Svoboda’s Mark Krutov that he had come to Ukraine since it is the country which is most actively fighting the regime in Russia, and he wants to take part in this, perhaps by fighting as a volunteer soldier.  He is adamant that the authorities in Russia did not intimidate him, but he understood that they would not let him continue his protests.

Roslovtsev’s ‘walks’ around, for example, Red Square wearing a mask depicting Russian President Vladimir Putin until arrested were intended to point to the absurdity of a new anti-protest norm that makes it possible to be detained for nothing and end up facing criminal charges and a sentence of up to 5 years.

News that an unnamed ‘writer and civic activist’ had sought asylum on the Ukrainian – Belarusian border was posted by the Ukrainian Border Guard Service on Sunday, then later Roslovtsev spoke with Hromadske.ua. He explained that he had decided to seek refuge in Ukraine as it had become impossible for him to continue his entirely peaceful protests in Russia.  He has since explained that he had been planning to leave for some time, although it almost fell through at the last minute.  He had gone back to his flat to pick up his things, he says, and found two suspicious-looking individuals in his block entrance.  The person who was driving him out of the country also took a look and confirmed that they looked like they were from the FSB or similar and said that it was better he left with nothing than risk being arrested.

Roslovtsev has to date been stopped at very least 12 times while engaged in highly individual acts of protest which, even under Russia’s repressive legislation, are completely legal.

In May this year he was jailed for 20 days for trying to walk out onto Red square wearing a rubber ’Putin mask’ and a T-shirt stating that he is not afraid of Article 212.1.  He had been detained immediately then and on previous occasions when he had worn the same Putin mask and held a placard with the same message.

Article 212.1 has been condemned by the Memorial Human Rights Centre as aimed at destroying any forms of protest.  As well as allowing for hefty fines or even 30-day terms of imprisonment on administrative charges, it envisages criminal prosecution for totally peaceful protest.  A sentence of up to 5 years can be passed if a court has issued three rulings on administrative offences within 180 days.

It is standard in today’s Russia for police to detain people at entirely peaceful protests, with administrative protocols then drawn up and processed by the courts with no questions asked.   Three such unwarranted administrative penalties can now lead to criminal prosecution.

It was under this article that civic activist Ildar Dadin was sentenced to 3 years’ imprisonment in December 2015 over 4 totally peaceful and legal pickets or small protests.  76-year-old Vladimir Ionov looked set to become the second victim of the law.  He too left for Ukraine and has just been granted asylum.

There had been no grounds for any of the administrative protocols against Roslovtsev, yet the Tverskoy Court had imposed huge fines and then jailed him.

By June open and illicit pressure against him increased, and he was jailed that time for 30 days.  The court found him guilty then of ‘a repeat infringement of the established order for organizing or holding a meeting’.

Grani.ru reports that during his last jail term, the FSB turned up trying to ‘recruit’ him and convince him he was wasting his time.

They failed, and Roslovtsev continued his peaceful actions.  Or tried to, since this time the FSB or so-called Centre for Countering Extremism grabbed him as soon as he received the new Putin mask, ordered by courier from an Internet shop.  They drove him around for a couple of hours threatening him with dire consequences if he didn’t give up.  He was warned that they would not allow him to even try his ‘Putin walks’, and that things would be bad for him.

What else the FSB would have resorted to against the young activist rather than let him walk about in a Putin mask, or than end up with a truly absurd court case, can now, fortunately, remain a matter for speculation only.