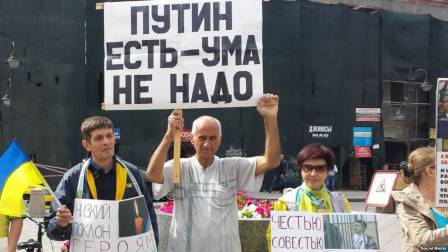 Vladimir Ionov with a placard reading "We have Putin, no need for a mind"

Vladimir Ionov has been granted political asylum in Ukraine, eight months after he was forced to flee likely imprisonment for peaceful protest in Russia.  Ionov was one of the first activists to be prosecuted under a draconian anti-protest law. Since his trial was due to end shortly after Ildar Dadin was jailed for 3 years on identical charges, there were serious grounds for believing he could be next.

Ionov told Hromadske Radio that his new status means that he can enjoy free public transport as a pensioner, and can also travel abroad.  In Russia he had simply been refused a passport, because he had been forced to sign an undertaking not to abscond.

Even without a passport, Ionov was fortunately able to reach Kharkiv in December 2015 where he met up with his partner Olga Braun, who had left separately.  Back in December he explained to Grani.ru that it was because of the changes in his personal life that he had felt compelled to leave.

The court hearing into Ionov’s case immediately after Dadin’s conviction had been postponed after Ionov’s blood pressure rose dangerously.  It was probably due to his age and state of health that in his case the prosecutor had, on Nov 25, asked ‘only’ for a three-year suspended sentence. Ionov had then stated clearly that he had no intention of complying with unconstitutional restrictions, so there would have still been a very real likelihood of his imprisonment.

During the earlier court debate, Ionov had explained how the situation had become “nightmarish” after Vladimir Putin came to power.  He recalled Putin’s notoriously vulgar threat to ‘waste terrorists in the latrine’ and said that he had begun protesting then, going on demonstrations and marches.  Then the authorities got worried, and banned such marches, and he began coming out on single-person pickets which are not – in theory at least - banned.

Ionov was charged with four episodes: a single-person picket on Jan 10, 2015 with a placard: “Je suis Charlie” [this was just after the massacre at Charlie Hebdo in Paris]; taking part in gatherings on Jan 15 and on March 21 that year, as well as participation in a picket in support of Nadiya Savchenko, the Ukrainian pilot then still imprisoned on her birthday (May 11, 2015).

He and Mark Galperin were the first two people arrest under the new anti-protest law on Jan 16, 2015.  Dadin was detained on Jan 30 and immediately placed under house arrest.

The new law has been condemned both in Russia and abroad.  The Russian Memorial Human Rights Centre stated that the new legislation crushes freedom of peaceful assembly in Russian altogether.

It is excellent that Vladimir Ionov has relatively swiftly been granted the asylum he clearly deserves.  Unfortunately, Ukraine’s authorities are very slow in changing and there are many other Kremlin critics, including some who have got into trouble for opposing Russia’s aggression against Ukraine, who get much worse treatment. See: How can Ukraine turn away friends fleeing persecution in Russia?