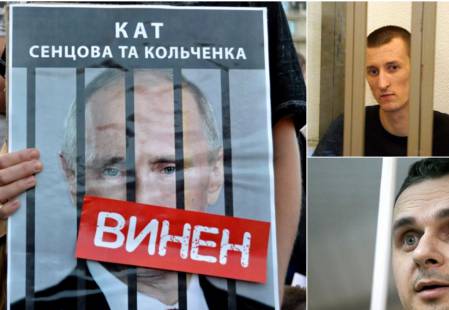 Civic activists have marked the first anniversary of the sentences passed on Crimean filmmaker Oleg Sentsov and civic activist Oleksandr Kolchenko by handing down their own verdicts on the Kremlin and the investigators, prosecutors and judges directly implicated in that show trial.   Those gathered held placards of the men’s ‘executioners’, with photos of Russian President Vladimir Putin, the so-called Crimean prosecutor Natalya Poklonskaya, and others complicit in what prominent Russian writers and human rights activists called "ideologically motivated terror".

Liability, however, remains largely theoretical.  Ukraine has put together a sanctions list intended to be analogous to the ’Magnitsky List’., but without western countries joining Ukraine, it is hard to imagine the list having any ability to bite.

For the moment, Sentsov and Kolchenko are still in prison, over two years since they were originally seized, together with two other opponents of Russia’s invasion of Crimea – Gennady Afanasyev and Oleksy Chirniy – in May 2014.  Afanasyev is the only one of the four to have been released, as part of an exchange.  He was present at the meeting, together with Sentsov’s cousin Natalya Kaplan, and called on people to write to both men.

The Kremlin has ignored all demands from Ukraine and western countries that the men be released in accordance with the Minsk Agreement. Instead, it sent them as far east as possible to isolate them from both their families, and from the western media and diplomats.

There is a little more information available about Kolchenko thanks to the excellent efforts of two members of the public monitoring committee, Tatyana and Nikolai Shchur.  They have just visited Kolchenko and say that he seems in good mental and physical health.  He has, however, been held in a punishment cell for the last four days on an absurd pretext, and the Ukrainian consul was refused permission to see him.  Kolchenko complains only of the information vacuum that he is being held in, and it seems that letters have either not been coming or have been deliberately withheld from him.

It is therefore vital that people do write (see below for details.).  It is likely that Sentsov is facing the same attempts to keep him isolated and cut off from information.

Both Sentsov and Kolchenko have shown incredible strength and courage since their arrest.  They refused to cooperate with the FSB to get shorter sentences, with Sentsov in particular being subjected to terrible torture, and told that if he didn’t ‘confess’, they’d make him the ‘mastermind’ and get him a much worse sentence.  This is exactly what happened.

Both men remained firm throughout.  As the monstrous sentences were being read out, they stood arm in arm, singing Ukraine’s national anthem.

In a recent letter, Sentsov wrote: “There is no need to get us out at any price – that won’t bring victory any nearer. Use us as a weapon against the enemy – that yes.  Be aware that we are not your weak point.  If it’s intended that we become the nails in the coffin of the tyrant, then I would like to be such a nail.  Just remember, that this nail will not bend.”  (Full translation here)

It was clear back at the end of May 2014 that Russia was seeking a Crimean show trial aimed at sending a chilling warning to other opponents of Russia’s annexation to keep their head low.  The Stalinist echoes were present from the outset in the emphasis on the demonized Ukrainian far-right nationalist party Right Sector and in the public demonstration of the initial ‘confessions’ of two of the men – Chirniy and Afanasyev.

The Kremlin miscalculated first with Sentsov and Kolchenko who were not to be broken, then with Afanasyev.  He found the courage back on July 31 last year to stand up at the trial and to retract all testimony, saying that it had been extracted

Moscow had effectively abducted Ukrainian nationals and its attempts to foist Russian citizenship on the men were overtly illegal.  The defence could only be forced to remain silent about the file material for so long.  Once the indictments were made public, and from the first day of the trial,  it was clear for everybody to see that there was no ‘terrorist plot’, and no evidence of any sort against Sentsov.  As the Memorial Human Rights Centre pointed out in its statement declaring both men political prisoners, the one charge against Kolchenko was in no way ‘terrorism’.  Memorial pointed to analogous cases in Russia where the charges had been different and the sentence at least three times smaller.

The prosecutor Igor Tkachenko ignored all of this, as did the three judges: presiding judge Sergei Mikhailyuk,  Viacheslav Korsakov and Edward Korobenko.’

They also disregarded Afanasyev’s retraction of his testimony and his detailed account of the torture he had been subjected to.  Afanasyev was also recognized as a political prisoner.

Ukraine has now introduced its own analogy to a Magnitsky list, for those directly implicated in the persecution of Kolchenko, Sentsov, Afanasyev and Chirniy.  Given the ever-increasing number of Crimeans facing politically motivated persecution, often for peaceful opposition to Russia’s invasion and annexation of another country’s territory, it would be desirable if the West also became involved.

Criminal orders to destroy human lives should not be obeyed, and those who arrest, torture, abduct and convict those the Kremlin wants punished should, as a minimum, face automatic bans on entry to EU and other democratic countries, and any other measures already applied to those on the Magnitsky List.