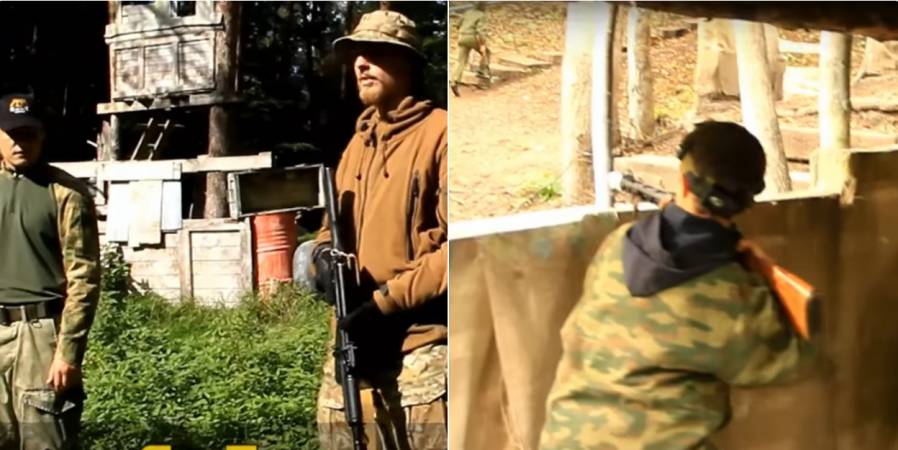 At least one Russian neo-Nazi believed guilty of war crimes in Donbas has for the second year in a row taken part in a Russian camp training children and young people how to fight and kill.  The Kremlin-backed militants in Donbas are known to be using minors in the military conflict, and there are strong grounds for assuming that young people, some very young are being armed and trained for this purpose.  This is one further reason for seeking the trial of the Russian mercenaries for war crimes.  There are many others, and it is frustrating that Yan Petrovsky, the Russian neo-Nazi recently arrested in Norway was simply deported to Russia, and not extradited to Ukraine.

The ‘II Dmitry Donskoy International Military-Patriotic Camp’ was held from 9-11 September 2016 in the Moscow region (Pavlovo Posad district).  Like an analogous event in September 2015, around 300 children and young people were involved, apparently from 19 so-called ‘military-sport organizations’.  There is little pretence about what is going on, and not only because ‘international’ in this case means children from the Donetsk and Luhansk oblasts, as well as Belarus.  Near the beginning of the video here, we learn that those who finish the training may if they wish take part in “humanitarian aid to Donbas”, as well as “helping the local police fight street crime”.

It is worth noting that in describing how he and Petrovsky first set off to fight in Donbas, notorious St. Petersburg neo-Nazi sadist Alexei Milchakov mentions that they left in June 2014, heavily armed and together with supposed ‘humanitarian aid’ for Donbas. It is likely that Milchakov was also present at the camp this year, like in 2015, though he is not seen on the video.  Certainly the camp is presented as the joint effort of an organization called E.N.O.T.corps and the military band ‘Rusich’ which Milchakov and Petrovsky led during their active and bloody role in the conflict in Donbas.

‘Humanitarian aid’ appears to be a euphemism common to many of the organizers of the event.  Roman Telenkevich, head of E.N.O.T. hands out awards at the beginning to those young participants who took part in the active phase of the conflict in Donbas which he appears to “hope will be” again.  The young people are described as having helped units in Donbas “through humanitarian aid, their labour and activeness”.   On receiving their ‘crosses’, the young men shout “I serve my fatherland, ENOT and the Orthodox Faith”.

The skills which boys and some girls as young as 8 are gaining through these camps should be watched.  They include shooting from pistols and machine guns, throwing grenades, and survival skills in a field where active fighting is taking place.

E.N.O.T. claims to be a volunteer outfit and to be running such well-equipped (and armed) camps “on enthusiasm alone”.  In fact, that is asserted in explaining the problems that arose over the location for their camp.  The local officials in Moscow region had no problem with the nature of the camp, but assumed that the organizers had received generous funding and effectively wanted their cut.

ENOT has its office in the very centre of Moscow and clearly has no problem with funding.  Its fighters, almost certainly working as mercenaries, are reported to have taken part in a purge in Spring 2015 of a Cossack formation which was competing for power with the current leader of the so-called ‘Luhansk people’s republic’ [LNR’], Igor Plotnitsky.

In a 2015  skype interview, Milchakov made it quite clear that he, Petrovsky and their fighters all received money for their services.  The same is most likely true of their activities in training young people to kill.

The Justice for Peace in Donbas Coalition has have long warned of ongoing use of minors in the fighting in Donbas, and documents such cases, hoping that eventually those responsible will be held to answer.

Petrovsky and Milchakov are two of the men against whom there is serious evidence of war crimes, and it is profoundly disturbing that they and others linked with them are being employed to teach young children military skills.

29-year-old Petrovsky was arrested in Norway, where he had officially lived since 2004, on Oct 18.  At that time the Norwegian police gave him 2 days to decide whether to leave the country voluntarily.  He initially tried to claim persecution, but is understood to have finally been deported on Nov 3.   The Norwegian police had decided his presence was undesirable for reasons of “fundamental national interests” which were probably linked with his far-right activities in Norway.  He had, however, also spent a considerable amount of time outside Norway, including the year he spent fighting in Donbas together with other Russian and pro-Russian militants.

As mentioned, he and Milchakov led the illegal armed formation ‘Rusich’ with others sharing neo-Nazi views.

Milchakov had gained notoriety in Russia for his videoed torture and beheading of puppies and his calls to fellow neo-Nazis to kill down-and-outs and animals in St Petersburg.  He and Slavyan [Petrovsky] were involved in direct fighting in Donbas from June 2014.

On September 5, 2014, the ‘Rusich’ fighters ambushed and killed a column of Aidar Volunteer Battalion fighters near Metallist.  They are believed to have beaten and tortured those who had survived the original shootout, with none left alive.  The Russian neo-Nazis then photographed themselves against the men’s mutilated bodies.  Milchakov was seen cutting off the ear of one of their victims.

‘Rusich’ was part of a bigger formation known as ‘Batman’. It’s leader Alexander Bednov [‘Batman’] and a large number of his men were killed at the beginning of January 2015 by LNR leader Plotnitsky’s men.  Milchakov and his cronies claimed that Batman’s cortege had come under attack  because Batman was getting in the way of Plotnitsky’s drug-trafficking racket.

Rusich has not been disbanded, and both Milchakov and Petrovsky still play a part in Russia’s undeclared war against Ukraine, including by training young children to kill.