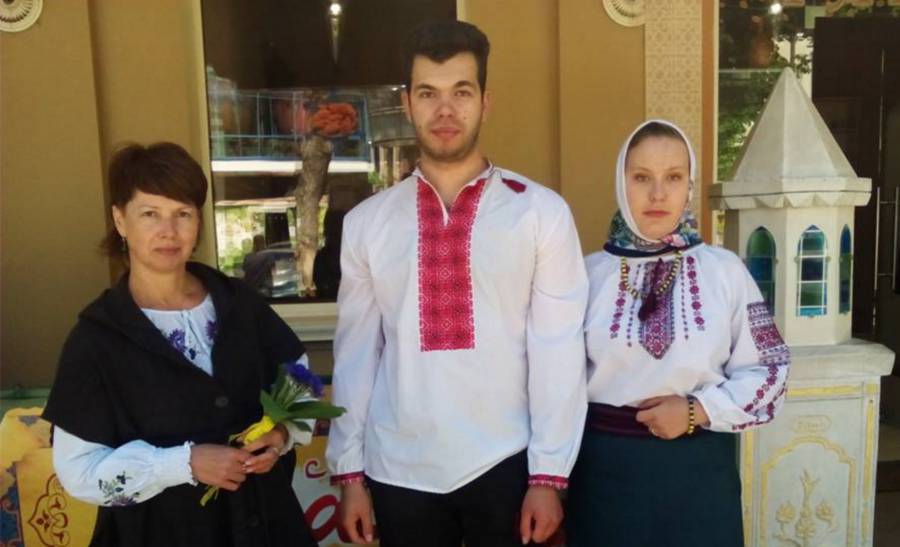 Four members of the Ukrainian Cultural Centre have been subjected to FSB interrogation in a move that seems clearly aimed at intimidation and at labelling any pro-Ukrainian activities, however unpolitical, as ‘extremist’.  One of the original founders of the Centre has been driven out of Crimea and is now facing charges effectively for opposing annexation, while another activist is threatened with possible criminal charges for a photo on her social network page with a Ukrainian flag.

Alyona Popova was questioned on March 21, while UCC founder Leonid Kuzmin, Mykhailo Batrak and Halyna Balaban were summoned earlier. The Crimean Human Rights Group that the four were told by FSB investigator Chumakov that they were being questioned as ‘witnesses’ in a criminal prosecution launched against another founder of UCC, Veldar Shukurdzhiyev for supposed ‘extremism’.   The FSB also asked questions about Ukrainian activist Andriy Shchekun who was forced to leave Crimea after being abducted and tortured by armed paramilitaries soon after Russia invaded Crimea, and Crimean journalist Ludmila Shchekun.

All of such questioning was manifestly aimed at putting pressure on the UCC activists, as are the charges against Shukurdzhiyev - seemingly of "public calls to action aimed at violating Russia's territorial integrity".    He was basically forced to leave Crimea for mainland Ukraine in February 2016, after receiving constant summonses to the so-called Centre for Countering Extremism and the FSB, and informal warnings of what to expect if he remained.

Two UCC activists – Andriy Vinohradov and Natalya Kharchenko - were briefly detained on Jan 12, after the FSB turned up at their home, carrying out a search and terrifying their two small daughters.  The FSB appears to be preparing ‘extremism’ charges against Kharchenko, with the pretext this time being a post on the social network VKontakte.  The couple’s lawyer Edem Semedlyaev was prevented from being present during the 4-hour interrogation or when they forced Kharchenko to sign an undertaking not to divulge any information.  It is likely that the uncertainty they have left her in is deliberate.  She has still not been charged, though the investigation appears to be  under Article 280 § 2 of Russia’s criminal code (‘public calls to carry out extremist activities carried out with the use of the media or Internet’). This is what the FSB call a photo of Kharchenko in camouflage gear with a Ukrainian flag, against Crimean landscapes.  Vinohradov that both he and his mother-in-law lost their jobs after the detention, and that he received an open hint that it would be better for them to leave Crimea.  He says they will probably be forced to do so.

If Kharchenko remains and the criminal charges are laid they will mark a sharp escalation in repression against UCC members, however harassment and court proceedings are not new.  Kuzmin,  Shukurdzhiyev and Oleksandr Kravchenko were first convicted of administrative ‘offences’  in March 2015 after being detained at a to mark the 201st anniversary of the birth of the Ukrainian poet Taras Shevchenko.  All three were sentenced to 40 hours of compulsory labour, effectively for Ukrainian flags, which one police officer in court suggested was a ‘prohibited symbol’.   Kuzmin also lost his job as a history teacher as a result.

‘Applications’ to hold the traditional gatherings remembering Shevchenko since then have been rejected.  All Ukrainian activists are likely to be summoned and issued with ‘warnings about the inadmissibility of extremism’ before any Ukrainian anniversaries.

Leonid Kuzmin, together with Shukurdzhiyev and others, created the Ukrainian Cultural Centre in Simferopol on May 7, 2015.  It was stressed from the outset that this was a totally apolitical centre, focusing on Ukrainian culture, history and language.  Initially, members gathered in people’s homes, however in 2016 they opened a very modest office in Simferopol.  The survival of this is constantly in question, with a month’s rent (around 200 USD) coming to more than individual members earn.

In January 2017, the Centre addressed an open appeal to MPs from Ukraine’s Verkhovna Rada, asking for help in paying for this office. They explained that UCC provides an open space for exchanging information and communicating with each other, Ukrainian language lessons as well as a language club, a Ukrainian cinema club and a place to hold lectures on Ukrainian history, literature and culture.  It also contains a library of Ukrainian literature.  They also asked .

Yuliy Mamchur, the former army colonel best-known for his enormous courage in standing up to the Russian soldiers who had seized his military unit in Crimea in March 2014, was the only MP who responded.

Kuzmin and other UCC activists feel understandably bitter that Kyiv is indifferent to their plight.  The situation is not, however, entirely straightforward.  Krym.realii with Mamchur and other MPs who said that they would certainly support any way of helping the Centre to survive.  Olha Skrypnyk, from the Crimea Human Rights Group, warns that care must be taken since any kind of so-called ‘foreign aid’ could be deemed to violate Russian legislation which is – illegally – applied in occupied Crimea.

In a to Novaya Gazeta, Kuzmin explained that there had previously been far more people active in the Ukrainian Cultural Centre with Ukrainians coming to Simferopol from Sevastopol and Yalta.  Many had stopped coming, he explained, since they understood that even for attending lectures on Ukrainian themes and film showings, a person will at very least attract the attention of the FSB.

The recent harassment and threats of prosecution from the FSB demonstrate that the fears are not unfounded.  They also give the lie to Russia’s claim at the International Court in the Hague that ethnic Ukrainians and Crimean Tatars are not facing discrimination under Russian occupation.