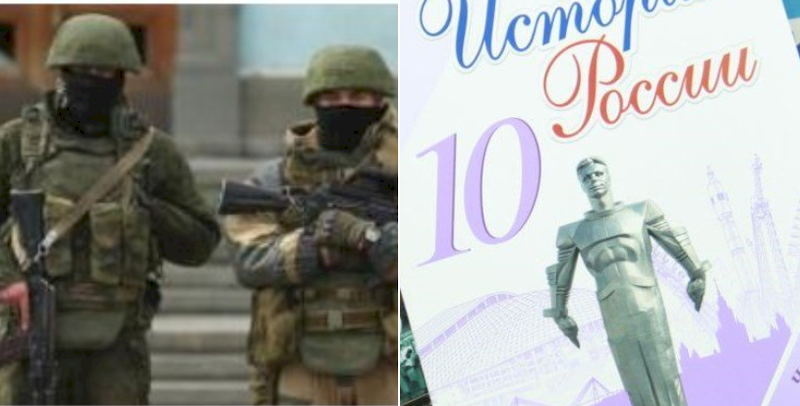 Russia’s Federation Council (the upper house of parliament) has issued instructions to check out history textbooks for their coverage of events in Ukraine in 2013-14, with the main concern being Russia’s invasion and annexation of Crimea, which Moscow calls ‘the reunification of Crimea’.

The move was initiated by Valentina Matviyenko, Federation Council speaker and close associate of Russian President Vladimir Putin.  She stated that the committee set up “should specially study the chapters of history textbooks devoted to the reunification of Crimea … and swiftly take measures to ensure that this was written correctly from the legal, juridical, political, civic and whatever other point of view”.  The committee must also “bind the Education Ministry to correct this immediately”.

Since there is no chance of making annexation ‘legal’, it seems safe to assume that the textbooks are to be vetted for their political correctness.  While Russia has passed over two thousand legislative documents on ‘integrating’ Crimea into its legislation, it has not withdrawn from the numerous international agreements according to which Crimea is Ukrainian territory.  According to Emine Dzhapparova, Russia has violated 407 international and bilateral agreements through its annexation of Crimea.

The committee will also be instructed to check coverage of events in mainland Ukraine so that this also corresponds with Moscow’s official position.

Sergei Tsekov, a Crimean supporter of annexation and now considered a member of the Federation Council attacked the “low quality’ of a number of textbooks.  He claimed that these often fail to reveal, what he calls, “the natural character of Crimea’s unification with Russia and do not justify Crimea’s place and role in the formation of Russian statehood”.   He cited an example, where the Revolution of Dignity or Euromaidan had been referred to as a revolution, and claimed that this was outrageous, since it had been a “bloody coup”.

He was seconded by Matviyenko who called the words in the textbook (whose authors had been named) “provocation”.

History textbook authors should consider themselves warned.  Maybe not they alone.  Russian philosopher and commentator Maxim Goryunov calls the Federation Council’s initiative a signal that the authorities are tightening the screws.  By showing that, as in the old days, the textbooks can be re-written, the public are being warned that the frost is setting in.

“A phase is beginning when you have to be silent, buckle under and be prepared that if you see fit to express yourself freely, the state will somehow punish you.  They may not rewrite the textbooks, but the entire country, all officials have heard about the intention to reassess history. That is viewed as a ‘red danger level’ and now individual elements of the system and, simply, Russians will begin to stress in every way their loyalty. The survey where 50% spoke in support of Joseph Stalin in actual fact demonstrates that people have got frightened and, just in case, follow the party line,” Gorynov says.

It has long been dangerous to express opposition to Russia’s position on Crimea, and despite the recent release of 60-year-old Crimean Tatar leader Ilmi Umerov, the situation is getting worse.  If Umerov and 67-year-old journalist Mykola Semena were convicted on the basis of falsified evidence and an FSB ‘expert’, prepared to write what is required, the imminent trial of Suleyman Kadyrov is even more brazen.  The 54-year-old Crimean Tatar activist faces a possible 5-year sentence for a reposted text on Facebook, ‘like’ and comment that Crimea is Ukraine, although even the ‘expert’ found no ‘public calls’.  Russian Tatar activist Rafis Kashapov has been in prison since December 2014 because of posts and reposts criticizing Russia’s annexation.  It is noticeable that the posts are still freely accessible (details here), suggesting that Kashapov’s imprisonment was a warning to others.  There have been other convictions and imprisonments since then.

Russia has been pushing a myth to justify its annexation since March 2014, with the components including supposed ‘historical justification’ and a heavily distorted account of events in February and March 2014, especially about a pseudo-referendum.  The truth is quite different, but repetition is very effective.  So too is the illusion that the state’s position is correct, because it’s the one children have seen throughout their education.  It is that which makes such plans to police textbooks so chillingly dangerous.