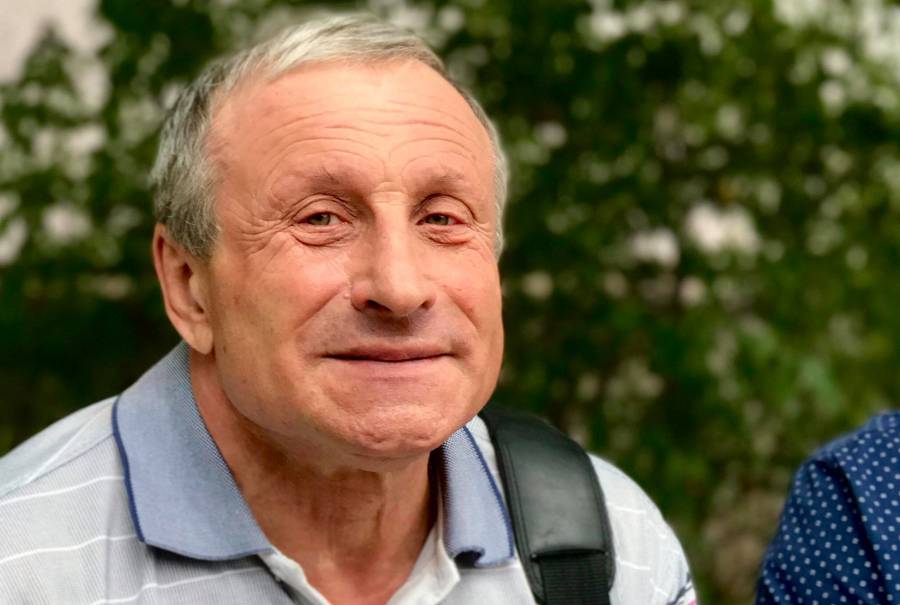 A court in Russian-occupied Crimea has passed a two and a half year suspended sentence on Ukrainian journalist Mykola Semena for expressing his opposition to Russia’s occupation of Crimea.  It was thus found that an opinion piece written by Semena contained ‘public calls to action aimed at violating Russia’s territorial integrity’.  His position expressed in the article fully coincided with that expressed by the UN General Assembly, EU, OSCE, and all democratic countries, as well as with that in a number of international treaties which Russia has ratified.

The sentence passed by Nadezhda Igorevna Shkolnaya from the Zheleznodorozhny Court in Simferopol was half a year shorter, but otherwise that demanded on September 18 by de facto prosecutor Svetlana Petrovna Budinskaya.  There is a probation period of three years and a ban on any public activities for the same period.  Semena would also be obliged to appear at the FSB twice a month.

In his final address to the ‘court’ on September 18, Semena said that if he was convicted, this would not so much be a verdict about him as one Ukrainian journalist, but a  sentence against all journalism in Russia.  Freedom of speech is a fundamental principle of civil society.

“I can’t understand how it’s possible to prosecute a person for a text where it’s stated three times that this is “an opinion” under Article 280.1 of the Russian criminal code, if Russia’s constitution has Article 29 specially devoted to the right of citizens to their views, and Article 52, prohibiting this being unlawfully restricted”.

Semena stressed that he had relied both on international law, and on Russian and Ukrainian legislation. His views on Crimea coincide with the opinion of the international majority, with all international organizations and the governments of the vast majority of countries.  It also corresponds, he stressed, to the views of a large part of the Russian political milieu which nowadays openly says that Crimea belongs to Ukraine, even according to Russian laws.

Semena addressed the emergence of Article 280.1 of Russia’s criminal code about the so-called ‘public calls to action aimed at violating Russia’s territorial integrity’.  This came into force in May 2014, and it was feared from the outset that it would be used to try to stop people stating – correctly – that Russia’s occupation of Crimea is occupation and a violation of international law.

“In order to hide from criticism of that violation of the law and to evade liability, officials from that country, in parallel with the annexation process, added Article 280.1 specifically in order to prosecute those critics.”

“The authorities are trying to achieve a situation where not one view differing from that of those in power is published. The point is, however, that this is a violation of the constitution”.

Despite various suggestions for trying to avoid the ‘trial’, he and his lawyers had decided that he would spurn any action in breach of the law. This was because they didn’t want to liken themselves to a certain country which is violating its own laws and encouraging lawlessness.

He believes that over the next 2-3 years the world community will resolve the issue of Crimea’s status, and whether Crimea once again becomes part of Ukraine, or a Crimean Tatar national republic, or an independent state, one thing is quite clear.  None of these options will correspond to its current unlawful status, and any decision will be based on international law, while those who violated this law from 2014-2017 will face punishment.   The right to freedom of expression will be reinstated in the first instance, he asserts.

Russia has violated all rights since its invasion of Crimea, but certainly its prosecution of Semena and Crimean Tatar leader Ilmi Umerov are an open and very Soviet offensive on freedom of expression.  In Semena’s case, there were also chilling echoes of the Soviet security police in the level of surveillance that he was under.  His very computer was being watched while he wrote the article in question.

The article in question was entiled: “The Blockade – a necessary first step to the liberation of Crimea”.  The text was written in September 2015, and posted on Krym.Realii as an opinion piece, a response to the concerns expressed in a first op-ed about hardships that the civic blockade, initiated with detailed human rights demands, could cause.

The indictment claimed and ‘judge’ Nadezhda Skholnaya,  accepted that the author had been ‘motivated by political animosity to the Russian Federation and the fact of the Crimean Republic having become a new subject of the RF, and aware of the criminal nature of his actions”.

Russia and its puppet courts have thus ignored a professional assessment of the ‘linguistic analysis’ carried out by FSB employee Olga Nikolaevna Ivanova which formed the justification for the charges (in this case and for those against Ilmi Umerov).  The assessment was totally damning with all the reasons listed in full.

This trial, and that of Ilmi Umerov, are so overtly lawless that the suspicion arises that this is quite deliberate policy aimed at intensifying the intimidation and terrorisation.  The message is clear: if anything goes, then anybody can be prosecuted and imprisoned.