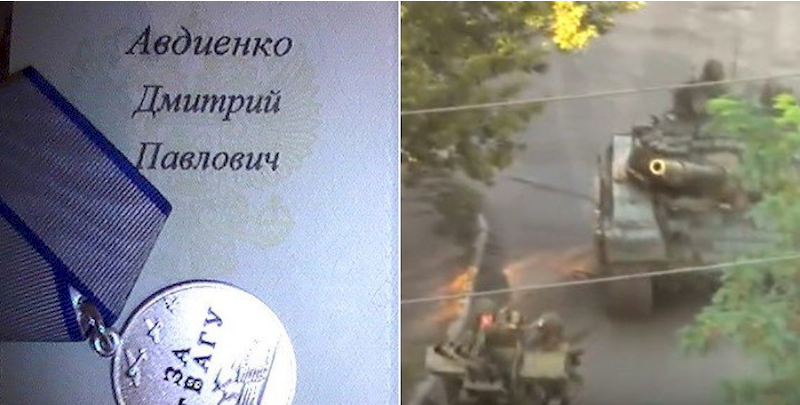 One of 26 tank drivers from the so-called Wagner private military company [PMC] was the proud recipient of a Russian state award ‘For Bravery’ in 2014.  It is illegal in Russia to be a mercenary, but that is only one of many reasons for dismissing Moscow’s pretence that it has nothing to do with the Wagner PMC which has been deployed in both Ukraine and Syria.

InformNapalm has worked together with Internet sleuths from ‘Ихтамнет_м0209’ and the Ukrainian Cyber Alliance to put together information about 26 men in the Wagner PMC.  They do not as yet know how many of them were in Syria recently, when a huge number of Russians were killed, but they have been able to ascertain who had previously taken part in Russia’s invasion of Crimea or undeclared war in Donbas.

One Donbas ‘veteran’ is 32-year-old Dmitry Pavlovich Avdiyenko, who was obliging enough to use a social media page to flaunt the military award he received.  This is dated 5 November 2014, but otherwise has nothing to indicate where Avdiyenko demonstrated the alleged ‘bravery’ . He is, however, asked in the comments if it was “for the airport”, and answers yes, probably.

On 24 October 2014, Avdiyenko also posted a video, with the caption: “How our battalion went to take the airport in Luhansk.

This is not the first time that Russians have provided such incriminating evidence on social media.  On 19 April 2016 Alexander Minakov, a Russian soldier, received an award “for services to the Fatherland”, almost certainly for his part in the battle of Debaltseve which was in direct breach of the Minsk II agreement that Putin had just signed (details here).

Russia’s claim was that any Russian detected fighting in Donbas was a ‘volunteer’, whom Russian President Vladimir Putin suggested was “prompted by the call of his heart”.

With respect to the so-called ‘Wagner private military company’, the Kremlin itself spoiled this myth by inviting its head, Dmitry Utkin (better known as ‘Wagner’) to a Kremlin reception on December 9, 2016 to mark ‘Hero of the Fatherland Day’.  Putin’s press secretary Dmitry Peskov claimed that Utkin was present as a recipient of the Order of Courage and that nothing was known about his military unit.

Utkin and his deputy – 54-year-old Andrei Troshev -  were reportedly wearing military honours, including Gold Stars received for the taking of Palmyra in Syria.  Utkin had been spotted by Denis Korotkov, a St. Petersburg journalist who has suffered harassment after he began investigating the Wagner unit’s links to billionaire Yevgeny Prigozhin, often dubbed Russian President Vladimir Putin’s cook.  While Prigozhin may be fronting the money for the PMC’s activities, the question must clearly be asked how this person who had served a long prison sentence for serious crimes, and then tried selling fast-food on the street, should now be in possession of vast wealth.

Their investigation into the 26 tank drivers whom they located found geotags linking certain men with Ukraine:  Snizhne, as well as the Donetsk and Luhansk airports.

The investigators note that Wagner men have been warned off using social media and it is much harder to track them down.  Harder, though not impossible, as their new study shows, as do more recent investigations by Korotkov and others.

It remains to be seen whether the death of up to 300 Wagner fighters during an aborted attack in Syria recently has any impact on how willing the families of killed fighters are to keep silent.  Russia has long been seen denying any knowledge and responsibility for men caught fighting Russia’s dirty war in Ukraine.  This time, however, Americans are reported to have warned Russia of a planned airstrike and to have been told that there were no Russians there at all which cost a very large number of men their lives.

The study concludes that the Kremlin is using the Wagner PMC as part of its hybrid warfare in Ukraine, Syria and may, in the near future, extend their reach to the Balkans. While under the guise of a so-called private company, the men are generally ex-Russian military who strictly follow the orders of the Russian commanders.  They get their training on the base of the 10th military intelligence spetsnaz brigade, and, as we see, receive state awards signed personally by President Putin.

Most menacingly, the Wagner unit provided a cover for regular Russian military who were also engaged in the battles for Debaltseve and the Luhansk Airport, and have undertaken other tasks in Donbas.  The investigators believe that it was the Wagner men who were used to kill fighters seen as demonstrating too much independence. They get heavy weaponry and technology directly from Russian Defence Ministry bases, the investigators are convinced, and differ from regular military servicemen only in the wording of their contract and the amount they’re paid. And in the fact that Russia can claim to have nothing to do with them.