Crimean Tatar Mejlis leader: If Ukraine extradites Chechen refugee to Russia, I could be next 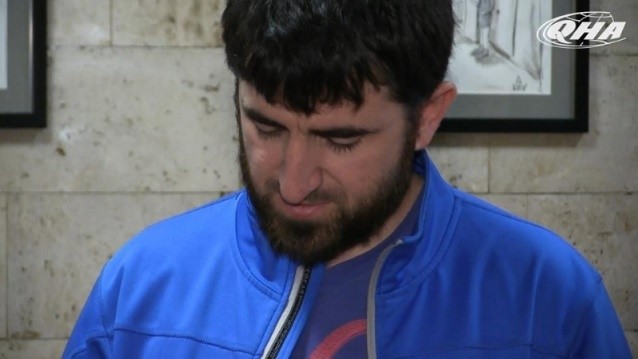 Yet another asylum-seeker facing torture and persecution if forcibly returned to the Russian Federation has had his application for refugee status rejected by Ukraine’s Migration Service.  This is despite the fact that Russia criminal proceedings against Chechen Mahomed Iliyev were initiated only after his engagement as a volunteer in support of Ukraine.

Mahomed Iliyev left Russia around six years ago and arrived in Ukraine shortly before Russia’s invasion of Crimea.  He later acted as a volunteer, providing support for the Isa Munayev International Peacekeeping Battalion, a Chechen volunteer unit defending Ukraine in Donbas.

Russia decided to issue an Interpol Red Notice against Iliyev in April 2015 under Article 208 § 2 of the Russian criminal code.  This article is worth quoting in full: it punishes for “participation in an armed formation, also participation on the territory of a foreign state in an armed formation not envisaged by the legislation of the given state, for purposes which run counter to the interests of the Russian Federation”.

This is one of the articles that Russia regularly uses to try to get its nationals forcibly returned, with Interpol seemingly never probing very deep. In April 2017, the Parliamentary Assembly of the Council of Europe expressed concern that “Interpol and its Red Notice system have been abused by some member States … in order to repress freedom of expression or to persecute members of the political opposition beyond their borders”.  PACE called on all member states of the Council of Europe to “refrain from carrying out arrests … when they have serious concerns that the notice in question could be abusive”.

In fact, this is not the only reason that should make the Ukrainian authorities think very hard before considering any such extradition demand from Russia.

Article 208 has also been used by Russia for charges against world-renowned Crimean Tatar leader Mustafa Dzhemilev and Mejlis Head Refat Chubarov.  Both are Ukrainian MPs who were banned from their homeland soon after Russia’s invasion and annexation, yet are now, in theory, facing this extraordinary charge.

It was precisely this that Chubarov himself mentioned during the hearing on 17 April in the Kyiv Administration Court of Appeal which is considering Iliyev’s legal suit against the Migration Service over its refusal to grant him asylum.

“In Russia there is a list called “List of organizations and individuals about whom there is information regarding their involvement in extremist activities, or terrorism’.  I am No. 7645 on that list.  Mahomed – 3264.  If Mahomed is today sentenced to be handed over to Russia, then tomorrow, they can easily sentence Chubarov. There is no difference between us, from Russia’s point of view, we are both terrorists.

Our migration service is totally failing to cope in situations where people are seeking protection not because they just feel like living in Ukraine, but because there is a risk to their life”, Chubarov stated.

He stressed that if Iliyev is returned against his will to Chechnya, there is a real danger that he will simply disappear without trace.

Iliyev was detained by the Zaporizhya SBU [Security Service] on 17 January 2016 because of the Interpol Red Notice issued on Russia’s behalf.

Iliyev’s lawyer, Oleksandr Lapin is hoping for a positive outcome to these court hearings.  If the court rejects Iliyev’s suit, they will appeal to the Supreme Court, however Iliyev would then be in real danger of extradition – to a country which is seeking to prosecute two Ukrainian MPs and world-respected Crimean Tatar leaders on similarly flawed charges.