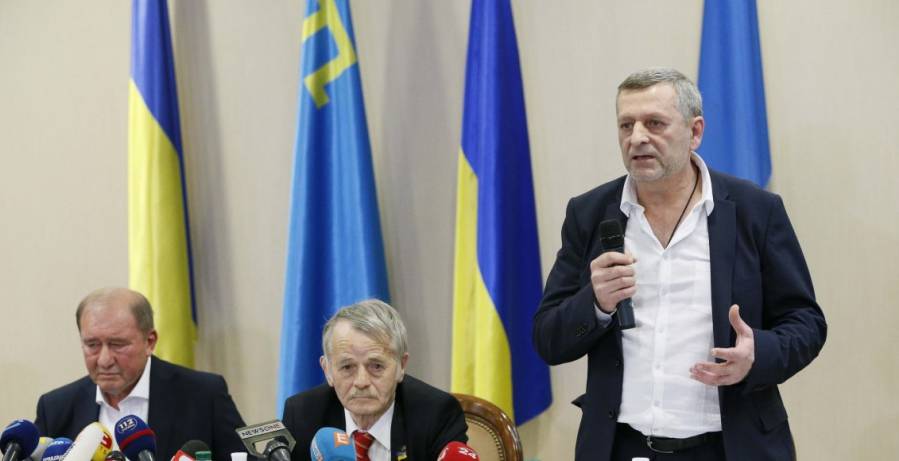 There was a sense of Soviet déjà vu  in the release of Crimean Tatar leaders Akhtem Chiygoz and Ilmi Umerov, seen in the secrecy with which the special operation was carried out and in the use of a third country. Déjà vu also since  just as in the USSR, the number of political prisoners who remain incarcerated is large and on the increase, with such hostage-taking described by Chiygoz’ lawyer as "profitable business" for the Kremlin

It remains unclear what the Kremlin has received as its ransom, but it is assuredly not the two men’s silence.  Both Chiygoz and Umerov immediately stressed the need to secure the release of the many other political prisoners, and Chiygoz would not talk of have been freed while his homeland, his people remain under occupation.

“Liberation is freedom, it is what you struggled for, not merely the liberty of particular individuals. It is the freedom of my people and my land”.  He speaks with obvious contempt of the ‘special operation’ fearfully carried out, “when they should, according to what’s on paper, release me to go home, but I’m taken away by men in balaclavas, without insignia, whom I recognize as the fascists who seized me.  And they take me goodness knows where.  We didn’t know till the last minute where”.

All of this is a remake of the release of Soviet political prisoners which is probably understandable given the KGB past of Russian President Vladimir Putin who makes the decisions with respect to any release. While the same was true of the release in 2016 of Nadiya Savchenko and two other Ukrainian political prisoners, there are also differences.  Nikolai Polozov, Chiygoz’ lawyer, is adamant that on this occasion, there was no exchange of prisoners,  and the presidential decree about their so-called ‘pardon’ remains secret.  There is a slight difference in the cases: while Savchenko herself refused to ask for a pardon, her family did make the request.  In the case of Chiygoz and Umerov, the refusal was more absolute, and it was the Mufti, who has chosen to collaborate with Russia, who formally asked for the pardon.

Germany has offered Ilmi Umerov medical treatment which he will, hopefully, agree to, however he and Chiygoz have both expressed their determination to return to Crimea.  Asked in a recent interview if the two could face new persecution if they returned, Polozov said that anything is possible from the Kremlin, but a repeat performance after their release would be somehow farcical.

“The other issue is that in order to get to Crimea, you have to cross the administrative border and that is the key point”.

As reported, Akhtem Chiygoz was almost certainly targeted as the highest-ranking leader of the Crimean Tatar Mejlis specifically because Russia had already banned Mejlis Chairperson Refat Chubarov, as well as veteran Crimean Tatar leader Mustafa Dzhemilev, from their homeland.  The first politically motivated prosecutions in Crimea included those against Crimean Tatars who had gone to the Armyansk checkpoint when Mustafa Dzhemilev tried to return to his homeland after Russia’s extraordinary ban.  Russia has now declared both Dzhemilev and Chubarov on their ‘federal wanted list’ with the charges of surreal cynicism.  The veteran leader is accused, among other things, of trying to illegally enter his own illegally invaded and occupied homeland.

Russia was too scared of the respect and support that Chiygoz enjoyed to allow him to be at his own ‘trial’, and would not let him attend his mother’s funeral.  Umerov in his turn was facing a two year sentence for saying that sanctions would help make Russia leave Crimea and Donbas.  Whatever the motives behind Putin’s decision to release the two men, it seems tragically likely that they will not be able to return while Crimea remains occupied.

Both Chiygoz and Umerov have spoken of trying to secure the release of other political prisoners, and it is worth also noting what Polozov had to say in this respect. While we have managed to get some of the people out, the number of political prisoners is not decreasing.  On the contrary “Russia is seizing new prisoners and this is happening both in Crimea and on Russian territory. They will continue to take hostages since that is profitable business – selling those hostages for some kind of political benefits. That needs to be countered, not just by Ukraine but by the efforts of the international community”.

There are around 60 people imprisoned on politically motivated charges in Crimea and Russia, with a large percentage of these scarcely ever mentioned outside Ukraine.  Whatever the political deals reached, it was surely also the outcry over the grotesque trials of Akhtem Chiygoz and Ilmi Umerov that prompted the Kremlin to agree to their release.  It is vital that voices are raised in defence of the other prisoners and the over 100 children who have been deprived of their fathers.

The list may not be comprehensive, and the rate at which it has risen over recent months is positively alarming.  Please click on the names or other hyperlinks for more information about the people, some of whom have been imprisoned for well over three years.