Poland’s Government deals death blow to independent judiciary. Free elections the next target if EU doesn’t act nowPoland’s right-wing government poised to seize more control of the judiciary than Yanukovych achieved in UkraineMenacing attack on Independent Polish TV channel as ruling party set to gain control over judiciaryPoland’s Government uses ‘Public TV’ as a propaganda tool to win the elections. Will the EU react?Politicized Polish judicial body illegally rubberstamps unfair presidential electionsDictatorship law that could force Poland out of the EU brings thousands out in protestEU silent while Poland seeks criminal prosecution of judge defending independent judiciaryPoland’s PiS government pushes through illegal elections by post to retain power amid Covid-19 pandemicOn documenting international crimes committed by the Russian occupiersUkrainians block "deliveries of death" from Poland to Belarus and Russia, demanding the EU stops trading with killers‘International institutions must protect Ukrainians from abductions and executions’, Ukrainian SCOsSOS! Save the civilian population in Bucha, Irpin, Hostomel!Kazakhstan opposition activists beaten up and threatened with deportation by Ukraine’s Security Service “Memorial” cannot be closed – it is the need to know the truth about the tragic past: statement of the Ukrainian human rights organizationsRussia calls Soviet invasion of Poland in 1939 a ‘march of liberation’ Comparing Stalin to Hitler could soon get you prosecuted in Russia, saying they both invaded Poland already hasCivic groups demand protection for Ukrainian journalist who got death threats over controversial articleCOVID-19 crisis threatens democracy, leading world figures warnCriminal probe against Poroshenko regarding Biden tape discredits Zelensky and UkraineWhy is Ukraine letting Donbas militant escape justice for Izolyatsia secret prison war crimes?
• Topics / Politics and human rights 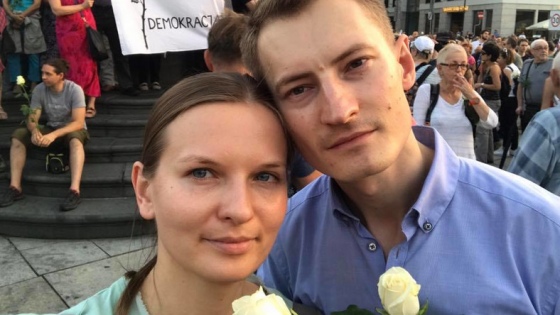 Lyudmila Kozlovska, a Ukrainian national who has lived in Poland with her Polish husband for 10 years, has been deported from the country in a move widely viewed as linked with the couple’s open criticism of the current government’s attack on the independent judiciary.  Given the EU’s concern about precisely the same dangerous assault on rule of law in Poland, it is galling that Kozlovska was first deported from Brussels after Poland included her in the Schengen Information System as a person to be denied entry to the EU.

Kozlovska founded the Open Dialogue Foundation [Fundacja Otwarty Dialog] in 2009 to defend human rights, democracy and rule of law in the post-Soviet region. She remains the Director of the Foundation, which she runs together with her husband Bartosz Kramek.

Kramek is convinced that the Polish PiS [Prawo I Sprawiedliwość] government has initiated this move against his wife in revenge for his public activities and criticism of the government.  Both say that they had long anticipated that the government would use the deportation card because of her citizenship.  Kozlovska writes that they had still, nonetheless, “hoped that Poland would not sink to the level of Kazakhstan / Russia / Moldova, where they persecute members of a person’s family for dissident views”.  She told Wyborcza that she is beginning to feel like a political refugee.

Marcin Wyrwał, writing on Onet.pl, calls Kozlovska’s deportation the latest step in the Polish government’s offensive against Open Dialogue which he clearly links with Kramek’s involvement in the protests outside the Sejm and the courts.

The main confrontation began in July 2017 as the PiS government, which has a majority in the Sejm, began speedily pushing through laws essentially giving it political control over the Supreme Court and ordinary level courts.  There were mass protests against this attack on the courts, and Polish President Andrzej Duda, who usually rubberstamps all the PiS moves, however unconstitutional, did veto two of the three dangerous laws.  This, however, merely gained some time since the revised laws were no better and have led to the EU initiating proceedings against Poland under Article 7 of the Treaty on the EU.

On 21 July,  Kramek posted a kind of manifesto on his own personal Facebook page, in which he wrote of the need he perceived for measures like those during Euromaidan in Ukraine to oppose the PiS government’s attack on democracy.  He makes it quite clear that he does not mean acts of violence, only of protest and civic disobedience (general strikes; temporary refusal to pay taxes, etc.).

Reaction was swift and clearly directed, not against the author, but against Open Dialogue.  At the end of July, the Ministry of Foreign Affairs [MSZ] demanded an explanation as to why, supposedly, on the Foundation’s Facebook page there was information “calling for illegal activities”.  Kramek responded on 4 August, stating that the Foundation did not consider that there had ever been calls to illegal activities on its Facebook page.  The conflict continued, although if you look at any pages of the actual organization, there is no sign of any material to justify the accusations.

In October 2017, the Ministry even tried to get Open Dialogue’s board suspended and the Foundation put under compulsory administration.  The application was rejected by the court.

Despite this, Wyrwał writes, the Foundation has for the last year been under specially stringent tax and customs scrutiny.

There was also a fairly major smear campaign against the Foundation, mainly from right-wing publications supporting the PiS government.

On Monday, 13 August, Kozlovska flew into Brussels where the Foundation has an office.  At the airport, she was one of the first people off the plane and handed her passport to be checked.  The border official asked her what crime she’d committed, and when she answered, “none”, he asked why then was Poland looking for her.

She says that at that point she understood what was going on and told the man that she is the wife of a civic activist and had anticipated that she would end up deported for his activism.

The Interior Ministry has informed that it was the head of the Department for Foreign Nationals who added Kozlovska to the Schengen Information System [SIS]. She was assigned the highest alert level which means automatic deportation not only from Poland, but from the entire EU.

Kozlovska says that the Belgian border police actually approached Poland to ask if they still held to their position.  She was told by the police that an answer normally comes within 12 hours, however in her case, it came after only two hours.  “It seems that somebody really wanted me thrown out”.  She notes that the country who includes a person on SIS normally gives the reason, making it easier to lodge an appeal.  Here no explanation was provided.

Any state has the right to decide whether foreign nationals may or may not live in their country.  In this particular case, Kozlovska has lived in Poland for ten years and has a Polish husband.  There may well be grounds for seeing this as a violation of Article 8 of the European Convention regarding the right to family life.

The situation here is of particular concern since Poland’s action has blocked Kozlovska from entering any EU country.  Poland has thus used its membership of the EU to extend an action which very many see as punitive and linked with her husband’s public protests.  It is worth noting in this respect that the European Court of Justice on July 25, 2018 issued a critically important decision regarding EU extradition requests.  The Court had been asked for clarification as to whether individual member states can hesitate in extraditing a person to another EU state if there could be doubts as to whether the person would get a fair trial.  The application was lodged by Irish Justice Aileen Donnelly specifically because of the assault on the judiciary in Poland.  The Court left the decision with the individual state, but confirmed its view that well-founded concerns about judicial independence could be considered.  The conclusions reached by the European Commission were clearly viewed as justifying such concerns.

Here Poland’s government has been able, without providing any grounds, to enlist the EU’s help in separating a Ukrainian civic activist who has lived and worked in Poland for ten years from her family and in effectively preventing her from continuing her work and that of the Open Dialogue Foundation