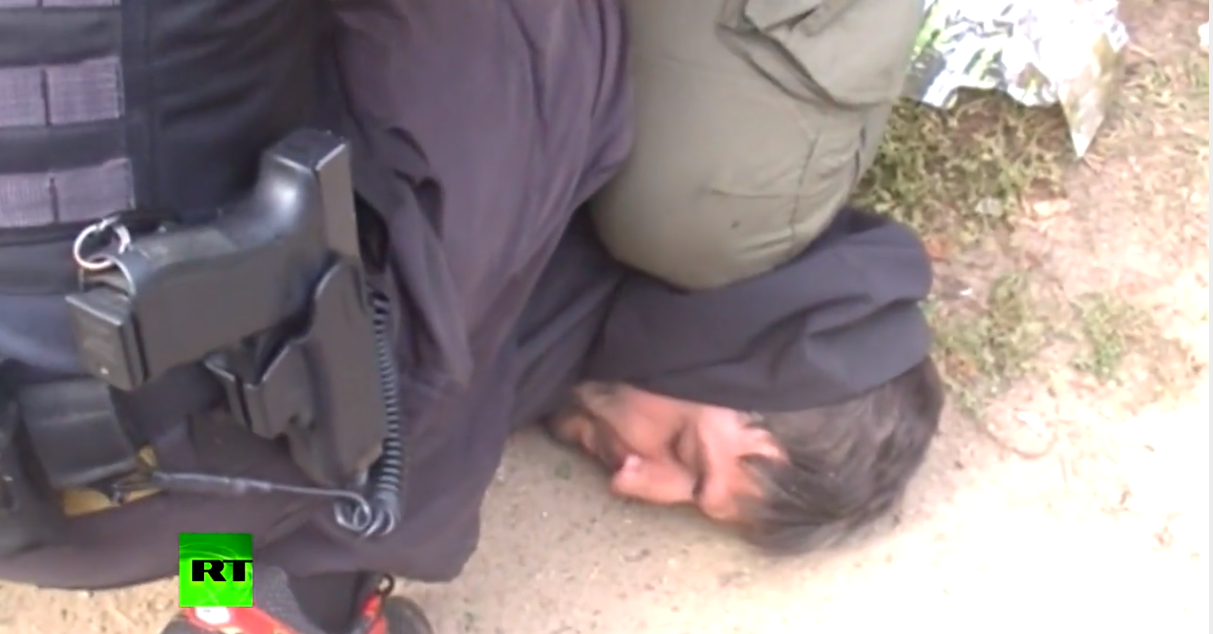 Two Russian citizens were forced to return to Russia from Ukraine in February 2018.  One was almost certainly tortured to death, the other – seized and tortured into ‘confessing’ to fighting for the so-called ‘Islamic State’, with the help of Ukraine’s Security Service [SBU] and Pravy Sektor [‘Right Sector’].

According to a third Russian citizen who is still in Ukraine, the SBU detained him, Dagestani Medzhid Magomedov and Artur Farkhiulin on 22 February in the Zhytomyr oblast.  Magomedov and Farkhiulin were found to have overstayed their permit to be in Ukraine and were given three days to leave.  Well-known journalist Anwar Derkach  has spoken with the third person, who would prefer to remain anonymous., and reports that there is nothing to suggest that either Magomedov or Farkhiulin was on any wanted list.  They do not appear to have asked for asylum and simply returned to Russia where both men were  seized, apparently in Moscow, on 7 September.

Eight days later, a Telegram page, called ‘Силовики’ and linked (as the name suggests) with the FSB, posted a photo of two bodies of young men who looked as though they’d been tortured, and who, it was claimed, were militants.  Farkhiulin’s documents were beside the bodies.

On 10 September, Russian state-media showed footage of Magomedov’s alleged seizure by the FSB and his ‘confession’.  The FSB claimed that Ukraine’s SBU had helped the Islamic State plan acts of terrorism in Russia and the  self-proclaimed ‘Donetsk and Luhansk people’s republics’ [DPR, LPR[ which were created and are controlled from Russia.

Most of the headlines, in fact, focused on the claim that he had planned to kill “one of the leaders of DPR”.  The timing was almost certainly deliberate, coming just ten days after a bomb blast killed DPR head Alexander Zakharchenko.  Russia immediately blamed Ukraine for Zakharchenko’s death, although the circumstances make SBU involvement highly unlikely, and, in general, Ukraine has better grounds for wanting such Russian-installed leaders on trial at the International Criminal Court than dead.

The FSB text, sent around to all media, asserted that the SBU “actively helped fighters of the international terrorist organization ‘Islamic State’, with security, finance, as well as weapons and explosives to organize acts of terrorism on the territory of the Russian Federation.  Members of Islamic State are also actively deployed by Ukraine’s security service for the removal of militant leaders of the self-proclaimed Donetsk and Luhansk people’s republics”.

For good measure, the FSB went on to claim that 31-year-old Magomedov had been working on the instructions of both the SBU and Pravy Sektor [Right Sector], a right-wing nationalist organization in Ukraine that Russia has consistently demonized and which is now illegal in Russia.

It is claimed that Magomedov was arrested on 9 September, though it is likely that the video of this was staged, and he could have been in custody longer.  While this cannot be proven, grounds for doubts about the explosives and weapons allegedly found at his home also seem warranted.

The FSB version asserts that Magomedov arrived in Ukraine at the beginning of 2018 to sort out Islamic State resource requirements, with the “ISIS emissaries” introducing him to the SBU and Right Sector, with the Ukrainians supposedly instructing him to kill the commander of one of the DPR armed groups, living in the Smolensk oblast (in Russia).

The obligatory videoed ‘confession’ was also provided, with the quality of the video suspiciously poor, which may have been to blur signs of torture.

In fact, there is a witness who can confirm that Magomedov was told to leave because he had outstayed his permit to remain.  The same witnesses informs that Magomedov is a member of a group which is strongly opposed to IS.

Even without Magomedov’s opposition to ISIS, the story would be wildly implausible.  There is nothing to suggest that the SBU are working together with Right Sector, let alone with the so-called ‘Islamic State’.  Russia has also used allegations of working with ISIS too many times about world-renowned Crimean Tatar leader Mustafa Dzhemilev, leaders of the Crimean Tatar Mejlis or even about Crimean Tatar civic activists.

All of these stories, whether presented by the FSB or by the Russian-controlled ‘DPR’ and ‘LPR’ invariably come with supposed ‘confessions’.  Very often the men show signs of torture, speak as though reading a script, and their subsequent convictions frequently have nothing to do with what they ‘confessed’ to on tape.

The ‘story’ did, nonetheless, get wide and totally uncritical coverage from most Russian and pro-Russian media.  The allegations were shocking enough to even get into the US journal Newsweek.  The latter did, however, consult with experienced analysts, such Daniel Vajdich from the Atlantic Council who said that the story seemed at one level to be an attempt to justify the killing of Zakharchenko. At the macro level, he said “the Kremlin always have an interest in creating this besieged fortress atmosphere in Russia and providing proof to Russian citizens that Russia is under attack. The message there is that the only thing that stands between these actors and the Russian citizens is Putin’s regime. It’s common for the Kremlin to do these sorts of things. They want to say there is a concerted effort by Russia’s enemies working together. You have Russia on one side, and on the other side you have Ukraine, ISIS, the United States, the rest of the world,”

Of the two men ordered to leave Ukraine merely because their papers were not in order, one is probably dead, and the other was almost certainly tortured into ‘confessing’ to a surreal plot, aimed essentially at presenting Ukraine as a dangerous enemy.