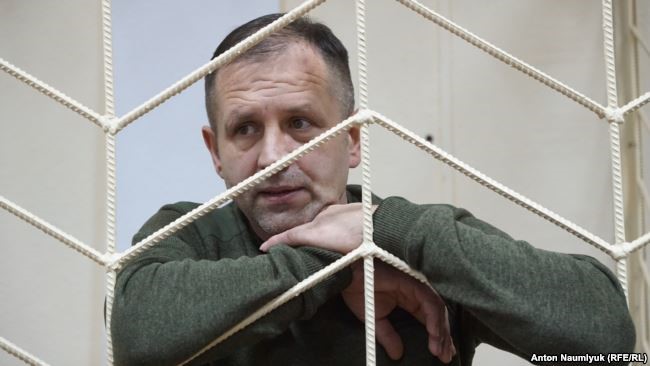 Ukrainian political prisoner Volodymyr Balukh has been moved from a Crimean prison to Russia, with the gruelling journey to Russian Krasnodar likely to be dragged out for up to a month.  There had been no warning of such plans which may well have arisen after the widespread events marking the political prisoner’s 48th birthday on 8 February.

Balukh was moved from the Kerch prison colony to the Simferopol SIZO [remand prison] on 13 February.  His lawyer received no information about that move, and it was initially thought that Balukh could have simply been taken to Simferopol for his cassation appeal.  It was then learned on 18 February that he had been taken from Simferopol with the destination clearly Russia.  The previous day, the SIZO staff had refused to accept a food parcel from Balukh’s wife, meaning that he will have been moved hungry, and doubtless without the clothes he will need in Russia where it is much colder.

Russia’s Ombudsperson Tatyana Moskalkova confirmed on 19 February that Balukh was being moved, but claimed that according to Russian legislation, a person’s whereabouts are not revealed until they reach the final destination, which could be from two weeks to a month.

Moskalkova’s mention of legislation is curious, and not only because Russia is in breach of international law by imposing its own legislation on occupied Crimea.  Article 73 of Russia’s criminal procedure code states clearly that, except in circumstances that do not apply here, prisoners are held in the part of the RF (or occupied territory!) in which they lived.

In fact, the legislation allows such ‘discretionary powers’ that it can easily be abused, as it has been in almost all cases involving Ukrainian political prisoners.  It should be stressed that Russia is also directly breaching a judgement from the European Court of Human Rights.  In March 2017, the Court issued its judgement in the Case of Polyakova and Others vs. Russia, in which it stated unequivocally that imprisoning people thousands of kilometres away from their families is a violation of their right to family ties. In the four cases considered, the prisoners had been held between two and eight thousand kilometres from their homes.  Russia is holding several political prisoners, including Oleg Sentsov; Oleksandr Kolchenko; Ruslan Zeytullaev and Yevhen Panov in some of the most inhospitable parts of the Russian Federation, thousands of kilometres from their homes.

If Russia can claim in those cases that there is no harsh-regime prison in Crimea, that excuse cannot be used with respect to Balukh whose politically-motivated sentence was to imprisonment in an ordinary prison colony. There was no good reason to move him from the prison in Kerch.

The move came five days after his 48th birthday, on 8 February and huge numbers of birthday greetings, flash mobs, etc. in Ukraine and beyond.  In Crimea, members of the Crimean Tatar community took Balukh’s 79-year-old mother flowers and gifts and spent several hours with her.  She told them that she had had no idea how many friends her son has.   It may well be that the abrupt decision to move Balukh was in retaliation for such publicity.

Balukh is internationally recognized as being imprisoned for his pro-Ukrainian views and for the Ukrainian flag which he refused to remove from the roof of his home, and he is likely to be in physical danger in a Russian prison.

His imprisonment is the culmination of persecution since Russia’s annexation of his native Crimea, which began with three administrative prosecutions and then two criminal ‘trials’.  All of the prosecutions were evidently fabricated and implausible.  It is quite likely that Russia has no problem with this since it makes the warning to others who dare to show opposition to its occupation of Crimea even more menacing.

There had been an almost unconcealed level of falsification in this case.  The officer who had supposedly found the ammunition had not been on duty that day and could not name the individuals who had instructed him to be present or their position in the law enforcement bodies. He was just as unable to explain why he’d removed the Ukrainian flag. The ammunition which the men, wandering in some unclear capacity around the Balukh home, allegedly found, had no fingerprints or other traces to indicate that any member of the family had touched them.  Most important, the ammunition in question was on the official register of weapons and ammunition in Barnaul, the Altai region of the Russian Federation, and was produced back in 1989.   Neither Balukh nor his common-law wife had been allowed to see what was going on, with the officer who effectively held Balukh prisoner during the ‘search’ unable to give a sensible reason for doing so.