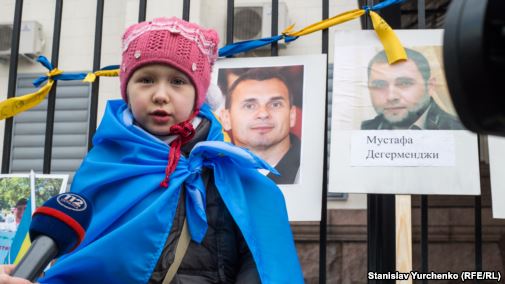 Relatives and lawyers representing Ukrainian filmmaker Oleg Sentsov and other Ukrainian political prisoners  have launched a public appeal, now open for endorsement, demanding a new strategy for putting pressure on Moscow and coordinating efforts.  Much more is needed than mere statements of protest, as the number of prisoners in Russia and Russian-occupied Crimea mounts.

At a press briefing on Oct 28, Natalya Kaplan, Oleg Sentsov’s cousin pointed out that  Sentsov, Oleksandr Kolchenko and other prisoners have been held in Russian captivity for well over 2 years, and there is zero progress in securing their release.  Her call for greater action was seconded by Petro Vyhivsky, whose son Valentin, was effectively abducted, held incommunicado and tortured and is now serving an 11-year sentence for unidentified ‘spying’.  Petro Vyhivsky stressed that they all understand that negotiations must be held behind closed doors, but the relatives of the prisoners need to be confident that something is happening.

The families and lawyers representing prisoners held in Russia or Russian-occupied Crimea have endorsed to Ukraine’s leaders.  They point out that over two and a half years have passed since the first Ukrainian Mykola Karpyuk was taken prisoner.   Only a very small number of prisoners, including Nadiya Savchenko, have been released, while more have been taken prisoner in the last months.

In the case of the three people exchanged this year – Nadiya Savchenko, Gennady Afanasyev and 74-year-old Yury Soloshenko – Viktor Medvedchuk, a controversial Ukrainian politician and close associate of Russian President Vladimir Putin, is known to have played a role. He recently claimed that Putin needs ‘grounds’ to release the other prisoners.   He also asserted that western pressure does not play a role.  This is almost certainly what the Kremlin wants people to think, but it should be at least qualified.  While ‘statements of deep concern’ can come in any quantity without impact, the Kremlin has often demonstrated a willingness to cooperate when faced with the likelihood of real sanctions.  It is also important to ensure that implication in politically motivated prosecutions hurts at all levels.  If Putin himself cannot be touched, his associates can and should, as should all those investigators, prosecutors and judges who have taken part in ‘trials’, most often based solely to testimony tortured out of prisoners.   Ukraine’s Foreign Ministry has begun drawing up a list, but it is very limited, and scarcely known about.

At present Russia is actually stepping up repression, especially in occupied Crimea.   After some degree of pretence about possible extradition of Oleg Sentsov and Oleksandr Kolchenko, Russia has again pulled out the lie that the two men ‘automatically’ became Russian citizens as an excuse not to release them.

It is undoubtedly true that the prisoners’ captivity is due to lawlessness in the Russian Federation and the Kremlin’s political motives regarding Ukraine.  Both the families and the lawyers representing them, however, doubt that the Ukrainian government is making sufficient effort to ensure the men’s release.  They are constantly told to maintain silence about what is going on.  With no communication, even on a confidential basis, about what efforts are being made, they are understandably suspicious about the nature – or existence – of such efforts.

In the case of hostages held by the so-called ‘Donetsk and Luhansk people’s republics’, there is at least a single coordination centre to look for and seek the release of prisoners.  With regard to prisoners held in Russia and occupied Crimea, there is nothing, and no clarity as to anybody being directly responsible for negotiations.

There needs to be a clearly identified individual or body, with their functions and powers needing eventually to be set out and regulated at normative level. “The problem of the Kremlin’s prisoners is not one that is likely to be resolved in the near future.  This is at once a strategic and a tactical issue, which Ukraine has not made steps towards resolving in the last 3 years.

The signatories to this open appeal are therefore asking the President’s Administration, Ukraine’s SBU [Security Service], National Defence and Security Council, Justice and Foreign Ministries to:

appoint a specific person or institution responsible for the negotiation progress;

oblige the person or body to regularly report, behind closed doors, to the families of prisoners and their lawyers, and to report to the public, perhaps once a month, providing any information that can be given without placing the negotiations in jeopardy.

They warn that otherwise, the already mounting distrust can only increase with the requests to relatives and lawyers to maintain silence being viewed as a way of concealing the authorities’ inaction.

The appeal can be endorsed here   (scroll down to: the words Звернення є відкритим для підписання. ПРИЄДНАТИСЯ МОЖНА  and press the hyperlink on the last word.  Only the first two boxes are mandatory:  Ім’я  - first name, Прізвище – last name

The appeal is signed by parents or other close relatives and the lawyers of the following prisoners – please press the links for more information about their cases.

Human rights activist Emir-Huseyn Kuku, as well as 18 other Crimean Muslims (scroll to the bottom for more detail)