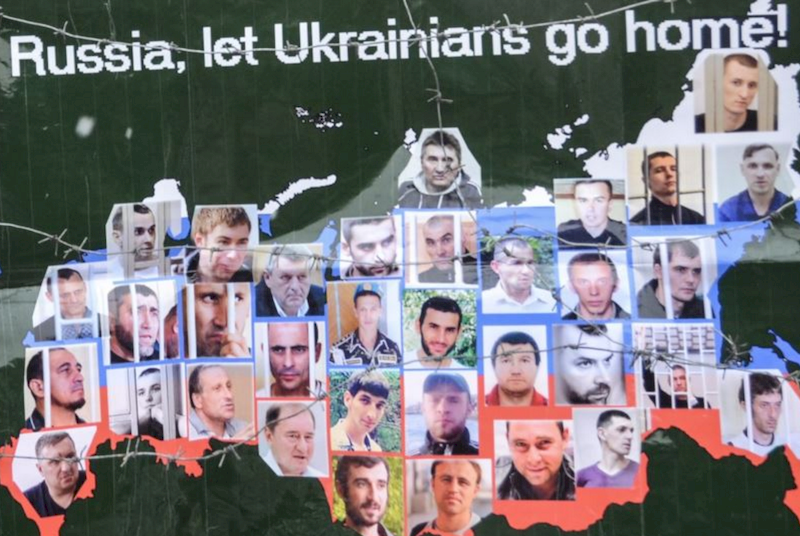 Russia’s political persecution of Ukrainians coincided with its invasion and annexation of Crimea, and the arrests have often been used in state-controlled media to ‘justify’ Russian aggression against Ukraine.  The arrests in May 2014 of Ukrainian filmmaker Oleg Sentsov and three other opponents of Crimean occupation were supposed to confirm the Kremlin’s narrative about Russia having stepped in to ‘protect’ Crimeans against Ukrainians planning acts of terrorism.  The mounting persecution of Crimean Tatars is doubtless also revenge for their opposition to Russian rule and a warning to others to keep their heads low or leave. The fact that there is never any terrorism, sabotage or other crimes, has proven terrifyingly irrelevant, with Russian ‘courts’ providing the sentences demanded of them.  It is no wonder that Sentsov, after four years’ imprisonment, has taken the only means he sees available, and has declared an indefinite hunger strike,  demanding that Russia release all its Ukrainian political prisoners.

It is likely that Oleg himself, illegally held in one of the harshest and most remote parts of the Russian Federation, does not even know how many Ukrainian political prisoners Russia is holding.  Nor is it easy to keep up as the number of arrests is steadily mounting.  The following is a list, which will be updated, of the prisoners we know of.  In a number of cases, especially involving ‘spying’ charges, there is very little information.  Given the frequent signs of beating during videoed ‘confessions’ and the fact that the FSB systematically prevents prisoners seeing proper lawyers, it seems very likely that this dearth of information is due to the lack of any substance to the charges.

As of the end of May 2018, there are over 70 Ukrainians held illegally in Russia or occupied Crimea on politically-motivated charges, or for their  faith.  Very many of the prisoners are held or have been convicted on spurious charges of ‘terrorism’ or ‘sabotage’.  In some cases, men who were shown ‘confessing’ to such charges were in fact imprisoned for something else.

The prisoners  (follow the hyperlinks for more information or an update.  There are more details about most of the cases below the alphabetical list of prisoners)

The trial of Sentsov and Kolchenko was condemned as “absolutely Stalinist” and “ideologically motivated terror”.  There was no evidence of a ‘terrorist plot’ and literally nothing against Sentsov at all, except the testimony of Chyrniy and Gennady Afanasyev.  The latter, at great risk to himself, retracted his testimony during the trial of Sentsov and Kolchenko, saying that it had been given under torture. All of this was ignored, and Sentsov sentenced to 20 years, Kolchenko to 10.

Mykola Shyptur  – Imprisoned since March 2014. The first and most forgotten political prisoner held in Crimea, who is probably imprisoned because they couldn’t just kill him.

Karpyuk was abducted in March 2014 and Klykh was seized in Russia in August 2014. The men were held totally incommunicado (Karpyuk for 18 months, Klykh for 10 months), and both give harrowing accounts of the torture they were subjected to.  The ‘confessions’ extracted were to ‘crimes’ that they had supposedly committed 20 years earlier in Chechnya, together with former Ukrainian Prime Minister Arsen Yatsenyuk and other prominent politicians.  Not only had the two men never been in Crimea, but the Memorial Human Rights Centre was able to demonstrate that the crimes had either never taken place or that the two men could not have been involved in them.  This was described as Russia’s ‘most monstrously falsified trial’, even despite the considerable competition for this title, yet Karpyuk was sentenced to 22 years, Klykh to 20.

Serhiy Lytvynov  seized in August 2014 and savagely tortured into ‘confessing’ to entirely fictitious ‘war crimes’ with these ‘confessions’ broadcast on Russian TV.  The case is exceptional in that Russia was forced to withdraw the charges after it was proven that Lytvynov could not have committed ‘the impugned crimes’, since both the names and the addresses of the alleged victims were fictitious.  The Investigative Committee came up with insultingly implausible charges and he was sentenced to 8.5 years.

Valentyn Vyhivsky was abducted in September 2014, and held incommunicado for many months, before being sentenced for mystery ‘spying’ to 11 years.

The title says it all: Ukrainian is serving 12 years in Russia for photograph of deserted aerodrome

28 men, most Crimean Tatar, are accused of ‘involvement’ in Hizb ut-Tahrir, a peaceful pan-Islamist organization which is legal in Ukraine.  They face huge sentences in what has been called a conveyor belt of repression. Since the first arrests in 2015, Russia has increasingly used these charges against human rights or civic activists, including people who were playing a major role in Crimea Solidarity, the initiative helping political prisoners and their families. All those convicted merely of alleged involvement in Hizb ut-Tahrir are declared political prisoners by the Memorial Human Rights Centre. .

Four men were arrested on 2 October 2017 and changed with ‘involvement’ in the apolitical and peaceful Tablighi Jamaat movement which Russia banned as ‘extremist’ in 2009. Three men were remanded in custody: Talyat Abdurakhmanov; Renat Suleymanov; Arsen Kubedinov;  while Seiran Mustafaev was placed under house arrest.

Russia used a pre-annexation demonstration to imprison Crimean Tatar leader Akhtem Chiygoz and target other Crimean Tatars.  Chiygoz was unexpectedly released in an exchange after almost three years in prison, however Ali Asanov, Mustafa Degermendzhy  spent almost two years in detention and have been under house arrest ever since, almost certainly for refusing to give false testimony against Chiygoz.

Oleksandr Kostenko has been imprisoned since February 2015, Andriy Kolomiyets since May 2015 on quite surreal charges linked to alleged and unprovable actions during Euromaidan in Kyiv before Russia’s annexation of Crimea.

Volodymyr Balukh   Imprisoned since December 2016 and jailed for three and a half years on overtly absurd charges and in fact for his pro-Ukrainian position, and the Ukrainian flag he refused to remove from his home.  Balukh has been on almost total hunger strike since 19 March, and is also facing new, politically-motivated charges.

See: Crimean jailed for a Ukrainian flag sentenced to three more years for refusing to be broken

On 23 November 2017 the FSB tried to arrest 83-year-old veteran of the Crimean Tatar national movement Vedzhie Kashka, and instead caused her death

Roman Sushchenko, journalist and Ukrinform correspondent in Paris was sentenced on 4 June 2018 to 12 years on unidentified and implausible ‘spying’ charges.

Oleksiy Sizonovych   The title is self-explanatory:  Ukrainian pensioner seized by Kremlin-backed militants in Ukraine, tortured & jailed for 12 years in Russia

In Crimea, Russia is increasingly targeting civic journalists and activists, and also concocting charges either to intimidate people into silence or in an attempt to discredit the Crimean Tatar Mejlis.

Ihor Movenko was sentenced on 4 May 2018 to two years’ imprisonment for a comment on the VKontakte social network.  The comments were only ‘noticed’ and a criminal prosecution for so-called ‘public calls to extremism’ launched after Movenko demanded an investigation into the brutal and unprovoked attack by a police officer that had left him hospitalized.