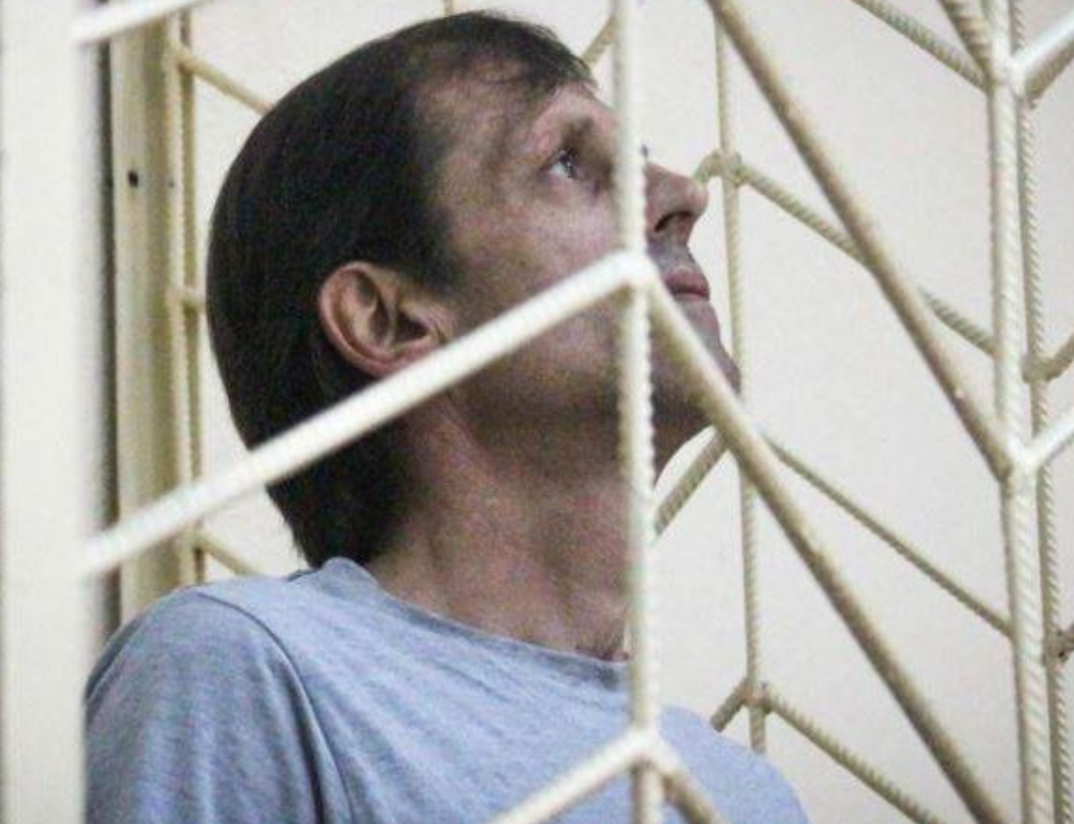 The Russian-controlled ‘High Court’ in Crimea has upheld a second sentence against Ukrainian political prisoner Volodymyr Balukh, shortening the original five-year sentence by only one month.  The month removed could prove theoretical as Balukh has now been on total or partial hunger strike for 200 days, and there are very grave concerns for his life. .

47-year-old Balukh has long complained of chest pain, and one of his lawyers, Dmitry Dinze, reports that there are problems with both his heart and internal organs.  It is likely that he has either an ulcer or pancreatitis (inflammation of the pancreas), but doctors have refused to visit him in the SIZO [remand unit] where he is imprisoned.  Dinze says that they can only count on a proper medical examination after he reaches the prison colony.  If he survives that long, and gets through the often gruelling journey to such a prison.

The appeal ‘hearing’ was originally scheduled for 24 September, however ‘judge’ Yelena Anatolyevna Spasenova postponed it after Balukh was not brought to the court.  This was against Balukh’s wishes and in clear violation of his right to be present, and he refused to take part by video link.

Spasenova had made the correct decision on 24 September, but was presumably told not to do it again.  As with the ‘trial’ of Crimean Tatar Mejlis leader Akhtem Chiygoz, the Russian occupiers are clearly concerned about the support these political prisoners command, and try to keep them out of the ‘courtroom’.  Balukh was therefore once again refused his right to be present and Spasenova continued on 3 October, regardless.  He in turn repeated his refusal to take part in this travesty of justice by video.

As reported, the second ‘trial’ was concocted when Balukh had already been imprisoned for well over a year.  The defence believes that it was the FSB [Russian security service] who insisted on obtaining a new conviction in order to prevent Balukh having the right to apply for early release.

It was claimed that Balukh had, on 11 August 2017, attacked the head of the temporary detention unit in Razdolne,  Valery Tkachenko and then poured a cleaning substance over him.  Balukh had repeatedly complained that Tkachenko was taking every opportunity to harass and insult him, and the defence is adamant that video footages demonstrates that the circumstances of the very minor incident on 11 August were quite different.  Even if Balukh had been found to be at fault, there should have been, at the very most, a disciplinary penalty.  Instead, criminal charges were brought of having ‘destabilized the activities of the detention unit’ under Article 321 § 2 of Russia’s criminal code.

On 5 July 2018 he was sentenced by Razdolne District Court ‘judge’ Tetyana Pyrzhalo to three years, as well as a 10 thousand rouble fine (upheld by Spasenova).  That sentence was added to the two years remaining of the first three and a half year sentence passed in a ‘remake trial’ on 16 January.

During the hearing on 3 October, the defence asked for a full acquittal since Balukh’s guilt had not been proven and since all alleged witnesses to the incident were Tkachenko’s subordinates upon whom it was easy to put pressure. It was also pointed out that the entire case had been initiated unlawfully, with Tkachenko, the supposed aggrieved party having effectively doubled up as ‘investigator’, gathering all the ‘evidence’ against Balukh.

The claim that Balukh had ‘destabilized the activities of the detention unit’ was simply not borne out by facts since the records showed that nothing untoward had happened on that day and that the unit had worked as normal.

This was a political trial and, as anticipated, all cogent arguments were ignored by Spasenova who rubberstamped the now 4 years and 11 month sentence.

This was the latest of FIVE administrative and criminal prosecutions brought against Balukh under Russian occupation.  All were quite absurdly fabricated, with scarcely any attempt made to seem plausible.  It is possible that this was deliberate, with the occupation regime wanting to demonstrate the reprisals to be expected for the Ukrainian flag which Balukh had refused to remove from his home and his unwavering loyalty to his Ukraine.

During the appeal hearing on October 2, the High Court in occupied Crimea had revoked the original sentence, having accepted the submission from lawyer Olga Dinze that Bedritskaya should not have been the judge, as she had been involved in the earlier administration prosecutions of Balukh.

Although the main urgent concern is over Balukh’s health and very life, these relentless reprisals by the Russian occupation regime are directed also against Balukh’s elderly mother, who, at 78 is nearly blind, unable to look after the family farm alone, and distraught that she may never see her son again.

Please contact politicians in your country, and the media.  As with Oleg Sentsov, it is now a matter of life or death whether sufficient pressure is brought to bear on Russia to free them, and the other (roughly 70) Ukrainian political prisoners it is holding in occupied Crimea and in Russia.