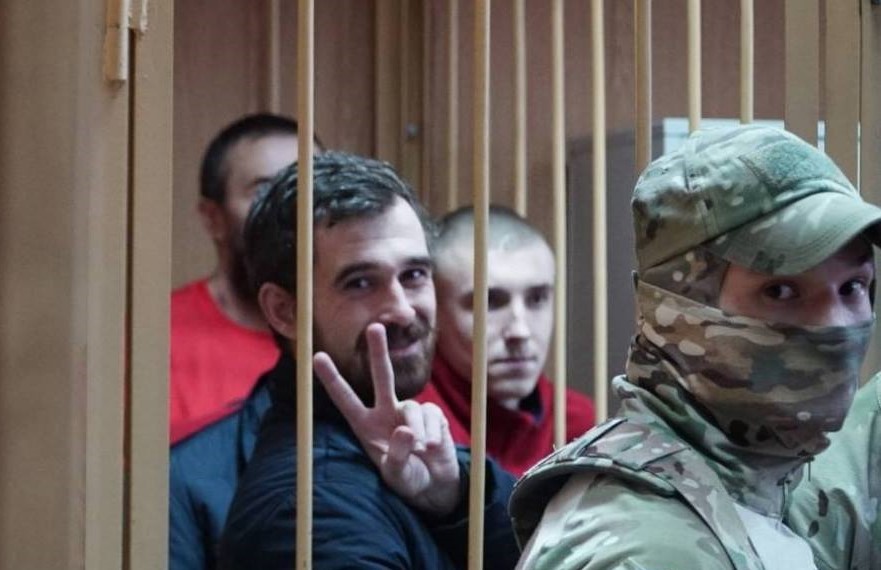 A month after Russia was ordered by the International Tribunal for the Law of the Sea [ITLOS] to release 24 Ukrainian servicemen it is holding prisoner, Moscow has yet again demonstrated its total contempt for international law.  The men remain in Russian custody, with the FSB imitating a criminal investigation, despite this being in flagrant violation both of ITLOS and of the Geneva Conventions.

Where international courts’ rulings are not to the Kremlin’s liking, they are simply rejected.  In this case, Russian President Vladimir Putin’s press secretary Dmitry Peskov has claimed that the case of the 24 Ukrainians does not fall under the jurisdiction of the Tribunal.  Since the UN Tribunal heard all of Russia’s arguments for asserting that ITLOS did not have jurisdiction, and still ordered that the men be freed, the Kremlin is thus placing itself above the Tribunal.

The Tribunal issued its ruling on 25 May, giving Russia one month to report on its implementation of the ruling.  As of 25 June, Russia is still imitating ‘investigative activities’ with the imprisoned men and even presenting final ‘indictments’, while the three Ukrainian naval vessels, which Russia attacked on 25 November 2018 have disappeared from the port in Kerch where they were being illegally held.

Having used threats and financial blackmail to force its way back into the Parliamentary Assembly of the Council of Europe, Russia is clearly gloating and feeling confident of its fist power.  Not even Russia, however, has flouted an order from the International Tribunal for the Law of the Sea.  After the Netherlands turned to ITLOS over Russia’s seizure of Greenpeace’s ‘Arctic Sunrise’ and its crew, Russia also refused to comply.  It did so, however, after two months, albeit claiming this to be as the result of an ‘amnesty’.  It also paid substantial damages.

Russia has already flouted the Tribunal’s order that it release the men without delay and return the naval boats.   ITLOS’ four decisions on 25 May 2019 were on provisional measures and were all passed with a majority of 19 to 1, with the only opposing vote being from Russian judge Roman Kolodkin.

The Tribunal did not fulfil one of Ukraine’s requests, namely for the suspension of the criminal proceedings against the 24 Ukrainian servicemen.  The charges, according to the Memorandum submitted by the Russian Federation are of “aggravated illegal crossing of the State border of the Russian Federation”.  Since any ‘trial’ of the men could only begin after the summer, there can be no excuse for their continued imprisonment in Moscow.

During the hearings in April, Russia’s argument was that the Tribunal should not consider what it misleadingly terms “the Kerch incident” due to reservations on the applicability of the Convention allegedly agreed between the RF and Ukraine.

Ukraine rejected such an assertion, pointing out that Russia had violated one of the fundamental principles of maritime law, namely the immunity of naval vessels and their crews,  Aside from the one Russian judge, the honourable judges of the Tribunal clearly agreed.

As reported, there are some specific features about this case.  There are extremely strong grounds, as recognized by the Office of the UN’s High Commissioner for Human Rights, for considering all 24 men to be prisoners of war under the Third Geneva Convention.  This was not highlighted in Ukraine’s presentation, since the Convention on the Law of the Sea applies strictly to peacetime.

For all its desire to reject ITLOS’ jurisdiction, Russia was effectively checkmated.  It could not point to the men’s POW status as proof that this was out of the Tribunal’s scope without admitting to its act of military aggression (details here). Recognition by any international court that there is a military conflict between Ukraine and Russia could result in Russia losing its right of veto at the UN Security Council, at least with respect to any votes on the situation in Ukraine.  This was doubtless the reason why Putin reacted so swiftly to the International Criminal Court Prosecutor’s preliminary report for 2016 which found that Russia’s invasion and occupation of Crimea constituted an international armed conflict (details here about the report and Putin’s reaction).

On 25 November 2018, Russian naval forces attacked three Ukrainian naval vessels near the Kerch Strait. which is the only passage between the Black Sea and the Azov Sea.  Russia opened fire on the Ukrainian vessels, seized them, and captured 24 crew members (22 naval officers and two SBU officers). Three of the men on the Berdyansk were injured during this attack.

While Russia is denying that the men are POWs and is seeking to prosecute them on criminal charges, the OHCHR stated very clearly that “based on the provisions of international humanitarian law, the 24 detained crew members could be considered as prisoners of war and protected by the Third Geneva Convention. In any case, they shall enjoy the status of a prisoner of war until a competent tribunal determines otherwise.”

The Russian FSB has used illegal methods to try to force the men to ‘confess’ to non-existent crimes and / or give testimony against the others.  After the initial standard FSB stunt involving forced ‘videoed confessions’, a team of lawyers, coordinated by Nikolai Polozov, was swiftly formed to advise the men and ensure that their rights were not violated.  The men have remained firm in refusing to answer any questions beyond those allowed by the Third Geneva Convention and stating that they are prisoners of war.

PLEASE WRITE TO THE MEN

They have now been imprisoned for over six months and getting any letter is an important message to them – and to Moscow – that they are not forgotten.