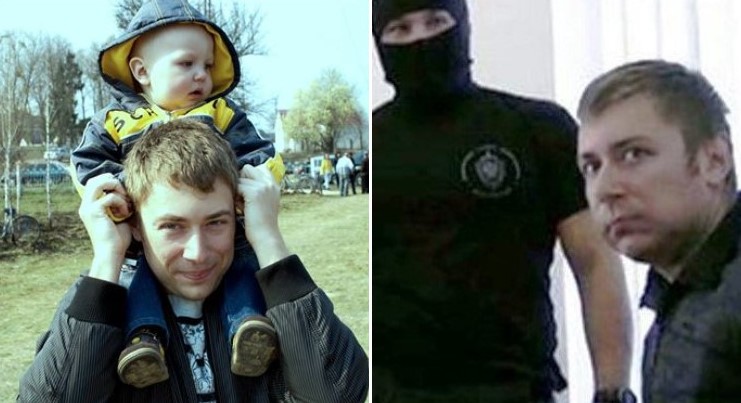 One of the men who did not step off the plane from Moscow on 7 September was 36-year-old Valentin Vyhivsky.  His parents had hoped till the last moments, and while rejoicing for other parents whom they have come to know very well over the last five years, it was a desperate blow.  Vyhivsky has been imprisoned since he was abducted from Crimea in September 2014, and has spent virtually all the time since then in solitary confinement.  By officially using period after period in a punishment cell, the prison authorities have also been able to prevent visits from his wife and mother, and seriously restrict the information he receives from Ukraine, even on technical subjects.  It is clear that Russia has a great deal to hide about Vyhivsky’s abduction, torture and ‘trial’.

In 2014, Vyhivsky was a young father with a five-year-old son, and a passionate, lifelong interest in aviation that prompted him to read huge amounts on the subject and to chat with other enthusiasts on the Internet, including many in Russia.  It is possible that one of these contacts was either working for the FSB, or was threatened by the latter with trouble because of her ‘suspicious’ contact with a Ukrainian who had taken part in Euromaidan.  Vyhivsky was one of three Ukrainian political prisoners who were taken prisoner immediately after arriving at the invitation of a woman they believed to be a friend. In Vyhivsky’s case, this was one of the people he had corresponded with and he had responded to the woman’s plea for financial assistance, supposedly for a relative with cancer.

Vyhivsky set off for Simferopol which was already under Russian occupation on 17 September and essentially vanished.  His family did all they could to find out what had happened, however it was only on 6 October that the Ukrainian Foreign Ministry was able to inform that he had been detained on 18 September, but not where he was.

It was over a month after his disappearance, on 20 October 2014, that they received a letter from Vyhivsky, with virtually no information, but making it clear from the return address that he was being held in Moscow.

The mystery and fluid charges

This was later changed to the much more serious charge of trying to gather Russian state secrets to pass on to the Ukrainian Security Service [SBU].

The FSB report said that he had ‘confessed’ to these charges when captured in Crimea.  If that were the case, what need did they have to hold him in total isolation for eight months?  It was only on 27 May 2015, eight months after he was abducted, that the Ukrainian consul was able to visit Vyhivsky, although then, and later during a visit from his mother a month later, two guards were present, stopping any subject concerning the charges and Vyhivsky’s treatment.  He managed to tell his mother only that they know how to persuade you”.

Both Vyhivsky’s father Petro, and his brother, received emphatic ‘invitations’ to come to Russia which they were equally emphatically advised by Ukraine’s Security Service [SBU] to reject.  It is really only from the earlier visits by his mother, Halyna Vyhivska, that we know about the ‘methods of persuasion’.  These included two mock executions in a forest, and other forms of torture, with Valentin still bearing the scars of some of these on his body.

It is unfortunately possible that Russia turned to even more ferocious isolation after details were made public of the torture he had suffered.  According to Petro Vyhivsky, the prison authorities hold him in ‘PKT’, a solitary cell for a few months, then move him for a week or so to an ordinary ‘punishment’ cell, and then move him back to PKT. Such cells are supposed to be used as punishment, and for limited periods, however this is certainly not the case with Vyhivsky,  The aim is clearly to hold him in complete isolation and to block further visits from his family.  His family are aware of letters that he has not received, and the prison authorities have even prevented him from receiving technical magazines from home.  He is held in an information vacuum, hearing only occasionally a radio in the corridor, which either broadcasts music or propaganda.