From Maidan to Torture & Solitary Confinement in RussiaKyiv demands return of Ukrainian abducted & jailed in Russia for ‘spying’ on the InternetTorture most classified: How Russia jails another abducted Ukrainian for ‘spying’Ukrainian abducted to Russia sentenced to 11 years for mystery ‘spying’Russia is killing 73-year-old Ukrainian hostage Yury SoloshenkoRussia sentences 73-year-old Ukrainian pensioner to 6 years for ‘spying’Mystery ’Trial’ begins of Russia’s Elderly Ukrainian HostageWorse than the Cold War: Russia’s FSB torments elderly Ukrainian hostageMoscow’s Kafkaesque ’Ukrainian Spy’ CasesMoscow shouts ‘abduction’ yet holds Ukrainian hostages incommunicadoRussia holds 72-year-old Ukrainian hostage on absurd spying chargesRussian mother of 7 stands by her warning about Russian soldiers in UkraineRussian Mother of 7 accused of ‘treason’ released from custodyRussians call to release mother of 7 accused of revealing ’state secrets’Russian woman charged with ‘treason’ for reporting soldiers sent to UkraineRussian Newspeak: “Killed at exercises on the border with Ukraine”Russian soldiers’ deaths in Ukraine: A web of lies and fake social network pagesMore Russians aware that their sons are being sent to fight and die in UkrainePersecution of elderly activist exposing Russian soldiers’ deaths in Ukraine continuesRussian rights activist investigating soldiers’ deaths in Ukraine arrested
• Topics / News from the CIS countries 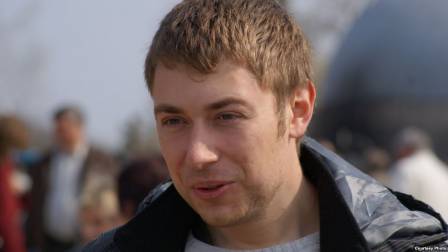 Ukrainian Valentin Vyhivsky turns 33 on August 3.  It will be his second birthday in Russian captivity and almost 2 years since he last saw his 6-year-old son.  Vyhivsky was abducted to Russia from Crimea in September 2014 and held incommunicado for many months, during which he was beaten and tortured, and twice subjected to mock executions.  His ‘trial’ for supposed spying was held in total secrecy, with his ‘lawyer’ a person provided by the FSB who almost certainly worked for his employers rather than representing Vyhivsky.  The appeal against his 11-year sentence was also held behind closed doors.

Information about the treatment Vyhivsky was subjected to has been difficult to obtain.  He has never been allowed to see his mother or the Ukrainian consul without prison staff present who prevent the conversation touching on ‘sensitive’ issues.  His parents have also been understandably worried about doing anything that could harm their son while he remains so totally under Russian control.

In fact, however, publicity now is vital and the more people who demonstrate to Moscow that the young Ukrainian is not forgotten, the better.

In an interview given to Glavred, Vyhivsky’s parents Halyna and Petro spoke of their son’s disappearance and the anguished months when they didn’t know if he was still alive.

Vyhivsky set off for Simferopol on September 17, 2014.  He had told his father only that he was going, and that he would be returning very soon.  The family went through hell not knowing what had happened after all contact was lost almost immediately.  They even paid somebody to travel to Simferopol and try to find out what had happened.

They think that their son was seized at the very railway station, and then taken by the Russian FSB to Russia.  The Ukrainian Foreign Ministry then joined in the search, but it was only when the so-called lawyer appointed for Vyhivsky got in touch, that they learned that their son was being held in the Lefortovo Prison in Moscow.

Halyna Vyhivska notes that the ‘lawyer’ aroused only suspicion from the outset, later confirmed by her son, and for a time she had the feeling that Valentin was no longer alive. When she was finally able to speak with him, Vyhivsky told her that at that time “I wasn’t alive – they’d beaten out my spirit, it was somewhere removed from my body”.

At the beginning Vyhivsky was charged under Article 183 of the criminal code, with illegally receiving and divulging commercial, tax or banking secrets.  The charges were absurd, but at least the sentence was only up to 2 years’ imprisonment.  This then changed to an accusation of “spying’, a charge potentially carrying a 25-year sentence.   For the first 8 months of his captivity, Vyhivsky was only allowed to meet Russian human rights activist Zoya Svetova.  She noted that Vyhivsky was clearly frightened and unwilling to even say what article of the criminal code he was charged under.  The Ukrainian consul was only allowed to see him after 8 months, and then in the company of two guards.

His mother first saw him in April 2015, and then one after time, together with his wife.  Through the little he was able to communicate at that first meeting, and through cryptic messages in his letters, his parents are aware that an attempt was made by the FSB to recruit him and also to ‘persuade’ him to give up his Ukrainian citizenship. It is clear that, regardless of any ‘confession’ beaten out of him, the charges are false, and Vyhivsky himself told his mother that he is no traitor. It is in any case unclear what ‘spying’ there could have been.

The methods of ‘persuasion’ applied were shown to Halyna Vyhivska.  During that first meeting, her son lifted up his T-shirt, revealing bruises and scars that had still not healed.  It seems that two mock executions were carried out during trips to the forest where he was subjected to other forms of torture as well.

Vyhivsky has asked his parents not to reveal all the details of his experiences for safety reasons.

Those methods, together with the fact that he was held incommunicado, and had only a state-appointed ‘lawyer’, resulted in Vyhivsky giving the ‘confession’ required.  He was sentenced on December 15, 2015 to 11 years’ imprisonment.

Since then he has been represented by a proper lawyer, Ilya Novikov (one of the three lawyers who represented Nadiya Savchenko), however the appeal hearing at which Russia’s Supreme Court upheld the conviction on March 31, 2016 was still effectively top secret.  Novikov was even forced to sign an undertaking not to divulge any information.  It is very likely that the information included details about torture used to ‘persuade’ Vyhivsky to confess. 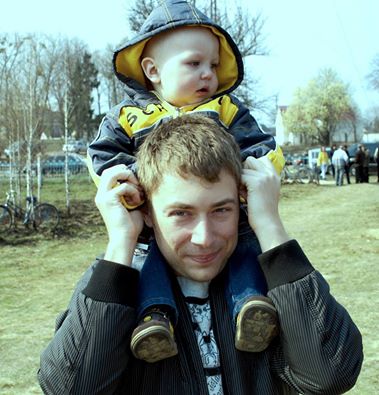 Vyhivsky was likely targeted because of his fascination since childhood with aviation and space travel.  His had prompted his choice of higher education, and his hobbies.  He spent lots of time on the Internet chatting with people who were also into aviation.  All of them know that they are under FSB surveillance, and it is likely that one of the people decided to report that a Ukrainian was discussing aviation matters with them.  In the summer of 2014 when Russia was arresting any Ukrainians it could on absurd charges, in parallel with its undeclared war in Donbas, that was unfortunately sufficient to lead to his arrest and incarceration.

Vyhivsky is now being held in a prison colony in the Kirov oblast.  According to Artur Abashev, a Russian human rights activist who has visited him, Vyhivsky is being held in solitary confinement without any contact with other prisoners and is not taken out from his cell.  He is being held in such conditions without radio, TV or even newspapers.  All of this is in flagrant violation of Russian and international law, and likely to cause grave psychological damage.  Abashev told Vyhivsky’s father that it could be because there are prisoners from the Donetsk and Luhansk oblasts who were clearly involved in the military conflict on the side of the Kremlin-backed militants.  Vyhivsky is certainly pro-Ukrainian and took part in Euromaidan, but it is not clear whether fear of conflict is behind the isolation, or other motives.

Ukraine has applied for Vyhivsky’s extradition, and his release has been demanded by European countries and the USA as per the Minsk Accords. The decision to abduct and try him was political and so will be his release.  Public pressure is therefore imperative.

Please write to Valentin for his birthday and show him and Moscow that he is not forgotten.

Happy Birthday!  I wish you good spirits, health and patience.  I hope that you will soon be home with your family where you are much missed!]