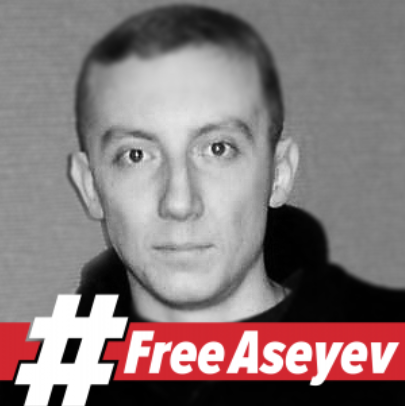 The self-proclaimed ‘Donetsk people’s republic’ has announced that imprisoned journalist and blogger Stanislav Aseyev has been ‘sentenced’ to 15 years’ imprisonment.  It is claimed that this was for ‘spying’; ‘incitement to spying’; ‘organizing an extremist organization’; public calls “to extremist activities’ and to ‘actions aimed at violating [the so-called republic’s] territorial integrity”.  These bizarre articles of a criminal code which is not recognized by any democratic country are almost certainly used to describe Aseyev’s truthful articles about life in the Russian proxy ‘republic’.

It is typical that the first news of Aseyev’s ‘trial’ comes from a report on the site of the so-called ‘DPR prosecutor general’ which informs that “the sentence has come into legal force”.

The report claims that from March 2015 to 11 May 2017 Aseyev took part in an ‘extremist society’ for remuneration and by email “sent the participants of the society material which he had prepared, negatively covering the activities of the authorities, the law enforcement bodies and military formations of the DPR”.

He is also alleged to have, on the instructions of “foreign intelligence” and via visual observation gathered information about the places of deployment of the so-called DPR people’s military and passed these, via the Internet, to members of the SBU [Ukraine’s Security Service], “being aware that the information would be used against the security of DPR”.   He is further claimed to have, “under the pretext of carrying out journalist activists, sought out pro-Ukrainian Internet users wishing to carry out the instructions of foreign intelligence and, via persuasion and conviction, encouraged the later to gather and pass on information of a military and other nature which could be used against the security of the republic”.

It is stated that Aseyev was sentenced back in August to 15 years’ maximum security imprisonment, with a ban on journalist activities for 2.5 years and restriction of liberty for a year.

The report suggests that Aseyev has, as one former hostage had asserted, been imprisoned since May 2017, rather than the beginning of June 2017 as first believed.

Aseyev, who recently turned 30, was born in Donetsk on 1 October 1989 and all his school and higher education were In Makiivka (a city very close to Donetsk) and Donetsk itself. Although he began writing fiction while still studying, it was only after the seizure of Donetsk by Russian and Russian-backed militants in 2014, that he began working as a freelance journalist and blogger.  In a recent video clip, the well-known writer and President of PEN Ukraine, Andriy Kurkov read out an excerpt from one of Aseyev’s articles.  The journalist wrote that “only a real civil force with a local registration, represented by over one thousand people who are against the so-called ‘Donetsk people’s republic’ in the central square of Donetsk will be able to radically change the situation showing that Donetsk is capable of more than just a disgraceful parade of prisoners, but showing that once there were those who walked under the Ukrainian flag…”   “Something tells me that that number is quite real, that these people just have to recollect who they are and what they are fleeing from. That is why I am still here in Makiivka, not sharing the tears spilled over the ruins of Donetsk from a warm and cosy apartment in Kyiv.”

Writing under the pseudonym Stanislav Vasin, Aseyev wrote articles about life in occupied Donetsk for Radio Svoboda, Dzerkalo Tyzhnya and other Ukrainian media.

His disappearance was first reported by Yehor Firsov in early June 2017.  His Facebook page had remained active after his seizure, with letters sent, clearly trying to get information about his contacts.

It was six months after he first vanished that the ‘DPR ministry’ first admitted they were holding Aseyev prisoner, and said that he was suspected of ‘spying’.

He is believed to have been held, at least until recently, at ‘Izolyatsia’, the former factory and then arts and cultural centre which the militants seized in the middle of 2014.  The word means ‘isolation’, and is bitterly appropriate since this has become a secret prison which former hostages like Dmytro Potekhin describe as a concentration camp.

Although Firsov did report that Aseyev’s mother had been allowed, at least once, to see her son, it was only in August 2018, that Aseyev was shown publicly.  This was, typically, on the Russian state-controlled Rossiya 24 channel, with Aseyev ‘confessing’ to having worked for Ukrainian military intelligence. All international bodies had, until then, been prevented from seeing him for 15 months, and there have long been fears that his nearly total isolation in appalling conditions and without necessary medication was aimed at forcing precisely such a propaganda stunt.  The fact that this was for Russian television, in a program overtly trying to present Ukraine as responsible for the suffering of the last four years, only confirmed the suspicion that Aseyev’s fate lies in the hands of people “close to Moscow”. While it is extremely likely that physical torture was applied, the militants had another lever against Aseyev – threatening to arrest or even torture his mother.  – they can threaten to arrest or even torture his mother.

There have been repeated calls from the OSCE, EU, Amnesty International and numerous media organizations for Aseyev’s release.  In early July 2018, PEN Ukraine issued a statement in which they called on both the Ukrainian government and international colleagues “to intensify their pressure on the Russian government, which controls the puppet authorities of the “DPR”, to immediately release Stanislav Aseyev, as well as all other Ukrainian political prisoners.”

Like in all occupied territories, Russia or its proxies have made any form of independent journalism a dangerous occupation and Aseyev is not the only journalist / blogger to have been or be held hostage for his articles. At least one other journalist / blogger is currently held hostage in ‘DPR’, with Oleh Halaziuk having also dared to write truthful texts about life in DPR (details here).