What judicial reform in Ukraine? Notorious Poltava judge gets lavish golden handshake instead of dismissal 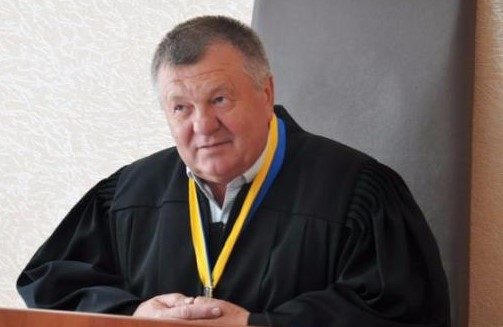 Ukraine’s still unreformed High Council of Justice has allowed the president of a Poltava court to retire with full, very generous, pension and benefits, a week before he was due to face disciplinary proceedings.  Oleksandr Strukov became known far beyond Ukraine because of his persecution of Larysa Holnyk, a judge and whistle-blower on judicial corruption.  He appears to be notorious also in Poltava for protecting wealthy criminals and drunken drivers, with one of the methods for terminating prosecutions over drunken driving having been mentioned in a Poltava Regional Prosecutor’s complaint to the High Council of Justice [HCJ] about Strukov.

HCJ had numerous grounds for at least waiting until after the disciplinary hearing scheduled for 15 April, yet on 9 April they allowed him to resign himself, with this meaning a substantial golden handshake (400 thousand UAH) and a very generous pension.  The HCJ session was held behind closed doors, despite an application for online transmission.   Worth noting that prominent Ukrainian NGOs recently called on President Volodymyr Zelensky to reduce the powers that the High Council of Justice has which they accuse it of using to sabotage judicial reform.

Ihor Havrylenko, a blogger and researcher accuses HCJ of having sat on complaints against Strukov for years and failed to react as required by law.  That has now resulted in a situation where not only Strukov is set up for life, at taxpayers’ expense, but so too is his common-law wife.  This is because Strukov is considered the sole breadwinner, although his wife has been acquiring considerable amounts of property in recent years, without officially working anywhere.

Havrylenko does, however, suggest that Strukov’s (slightly) early retirement can be viewed as a victory.  Strukov was President of the Zhovtnevy District Court in Poltava since 2007, however Holnyk’s complaint did somewhat shake his total power over the court.  As reported, Holnyk complained to the National Agency for Corruption Prevention over Strukov’s harassment of her for blowing the whistle on corrupt dealings.  NACP took far too long, but in 2017 did find in her favour.  At its instigation, the Council of Judges turned to the High Council of Justice, calling on the latter to hold Strukov to account.  HCJ’s reaction was pitifully inadequate, but, nonetheless, Strukov did receive a ‘severe reprimand’ with three months’ loss of supplementary payments.  Havrylenko believes that Strukov was genuinely terrified by the disciplinary proceedings initiated against him in January this year.  The High Council of Justice has now helped him out.

Havrylenko is also Holnyk’s husband and, with her, the victim of an attack that has never been properly investigated.   Had Strukov considered any of Havrylenko’s articles exposing dodgy court rulings to be defamatory or biased, he could have taken him to court.  In fact, a swift Google search shows that there have been repeated complaints about Strukov over the years, including that from the Poltava Regional Prosecutor in November 2019.

The complaints listed included unwarranted delays in considering drunken driving cases.  These are administrative cases, but can result in a person losing their licence for a year.  According to the prosecutor’s office, from 2017, over 100 people probably escaped any liability because of the procrastination, which is used to exceed the timeframe for such charges.

Havrylenko has described two cases involving Vitaly Petrov and charges of drunken driving.  He asserts that two judges from the Zhovtnevy District Court are known for specific treatment of drunken driving cases:  Strukov and his deputy, Hanna Andriyenko.  In one of the cases, Andriyenko kept scheduling court hearings to which neither Petrov, nor his lawyer, turned up.  This continued until the end of the statutory 3-month period for such cases, at which point the proceedings were terminated.

Strukov was involved in the other case where Petrov had been stopped by patrol officers at 3 a.m. while driving a Subari Legacy Outback.  He showed clear signs of intoxication but refused to take the test with all of this reported by two patrol officers and confirmed by two independent witnesses.

In court, before Strukov, Petrov claimed that he had not been driving, and that there had been a fourth person in the car.  ‘Person No. 4’, who was claimed to have been at the wheel,  had supposedly gone into a nightclub while the others sat in the stationary car.  Petrov claimed he had merely sat in the driver’s seat in order to speak with the passenger in the front, and listen to music.

Although this totally contradicted the police report and the independent witnesses, who had no interest in lying, Strukov terminated the case for want of an offence.

These were administrative offences, but only because the drunken driver had not actually killed one or more pedestrians or those in another car through his inebriation.

Strukov’s willingness to believe Petrov is all the more disturbing as the latter was evidently no stranger to him as a judge.

On 30 December 2015, witnesses spoke of seeing a young man shoot a person in the back, then begin kicking him and twice shot at him in the head with the sort of pistol that can, but does not necessarily, have rubber bullets.  The victim died of his injuries in hospital.  Vitaly Petrov, then 25 and the son of a criminal boss from the area, was charged with murder, with Strukov the presiding judge.

According to Havrylenko, there were numerous scandals during the trial, with attempts to intimidate journalists and witnesses, and with Strukov constantly trying to conceal the date of the hearings from journalists and members of the public.  While the trial was open, the defendant was questioned behind closed doors

This secrecy is worrying, given the verdict.  On 21 April 2017, Strukov, together with Serhiy Antonov and Anatoly Savchenko found Petrov guilty of “deliberate killing through exceeding the limits of necessary self-defence” (Article 118 of the Criminal Code).  The extraordinary softening of the charge, from murder,  meant that Petrov was released immediately, having spent just one year in detention.

There have been many other eyebrow-raising sentences that the High Council of Justice also ignored.  Its reaction to Strukov’s reprisals against Holnyk after she exposed judicial corruption was also disturbing.  Although Strukov did receive the above-mentioned reprimand, HCJ also allowed Strukov’s counter-claim against Holnyk over a Facebook post, in which she expressed her opinion of the actions of judges in her court who supported Strukov.  Holnyk was thus also issued with a reprimand which was later to be used to block her from taking part in the competition for Anti-Corruption Court judges.